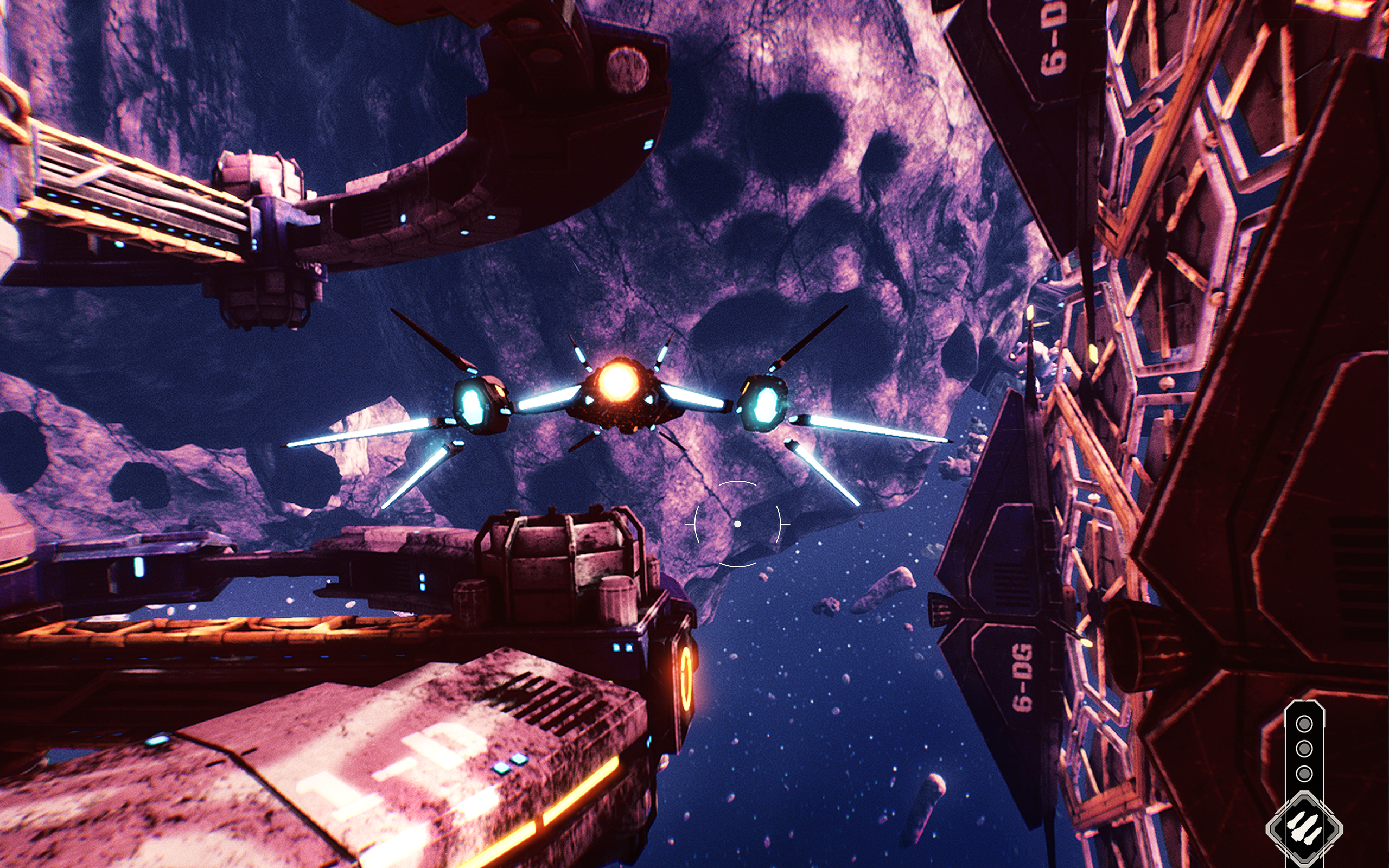 Shared universes are a hot commodity these days, helping to expand the reach and potential of various forms of media, be it a cinematic universe or a comic book series. Developer 34BigThings have tapped into this concept with this space shooter sharing both its name and universe with their futuristic racer Redout. This may not be as innovative at it initially seems – PSone classics WipEout and Colony Wars were set in the same universe. Unless we imagined it, which is entirely possible – the ‘90s were a long time ago.

Redout: Space Assault made its debut on Apple Arcade in 2019. True to that platform’s name and ethos, this is a very arcade-like affair. It’s on-rails for the most part, restricting movement, while primary weapons fire automatically. Holding the RT locks-on missiles; releasing it unleashes a barrage. Just to further hammer home its arcade-like sensibilities, the flight path is littered with giant spinning coins and collectable holographic blueprints bigger than the spacecraft itself.

Despite the game’s roots, it’s surprisingly good looking – especially given the £8-odd asking price. Lens flare is soft and subtle, starfield backdrops are detailed and varied, and there’s a good use of colour throughout including a nice range of electric pinks and purples. Spacecraft can also be kitted out with brightly coloured skins, all of which are available from the outset.

The only thing recalling its mobile roots is the presentation, including menus with chunky fonts and large tabs originally meant for fat thumbs.

Stages are spread across nine worlds, each ending with a boss battle. Despite most taking no more than 5 minutes to complete, this isn’t something you’ll beat in an hour or two – over 50 missions feature, each with optional challenges.

Only a few stages give full 360-degree movement, allowing for exploration as you seek blueprints and comms towers. Later, ‘prove your worth’ races are thrown into the mix. You’d think given the developer’s past works that races would be a highlight, but it’s actually the opposite – they’re unforgiving affairs with little leeway for error. It’s also impossible to tell what position you’re in (the AI rigidly follows a pre-set path) resulting in missions ending abruptly. How close you were to the finishing line is a mystery.

Between missions, the ship’s stats can be improved, albeit in incremental – and increasingly expensive – steps. It can take several missions to hit a milestone, which is only when the improvements are made notable. These include being able to fire more missiles – handy for missions that require a 60% kill rate – and the ability to fire two primary weapons at once. Primary weapons are doled out regularly too, and it’s a good idea to experiment with loadouts as they have different reaches and fire rates.

Adding to all this, stat-boosting cards are awarded at the end of each stage – only one of which can be equipped. This idea doesn’t come into its own until the final hours, as it’s only here that genuinely helpful perks are applied, such as HP regain.

Given its arcade-like nature and the fact that it’s a belated conversion, I expected Redout: Space Assault to offer a smooth ride. Sadly, it seems fixated on quantity over quality. Dramatic set-pieces and pivotal plot points are few and far between, while boss battles feel messy and sporadic due to auto-targeting. In addition to races requires a dozen attempts, a few more difficulty spikes litter the path ahead. One mission even called for a spot of token grinding as our peashooter weaponry was no longer able to penetrate shields.

The quality of voice acting isn’t great either, although the fact that each character has a distinct personality is commendable, helping each to stand out. Movie quotes also help lighten the mood, even if they are brazen.

Redout: Space Assault is definitely limited in what it has to offer. It’s never brainless, but nor does it remand sharp fighter pilot reflexes – it places you in the pilot’s seat, and then politely asks you to stop pressing buttons. The result is a game that often makes you feel more like a passenger than a participant. Come along for the ride, by all means. Pretty sights are plentiful – and at £8 there’s a decent amount of bang for your buck – but expect some turbulence.

Redout: Space Assault is out now on PS4, Xbox One (tested), Switch, PC and Apple Arcade.