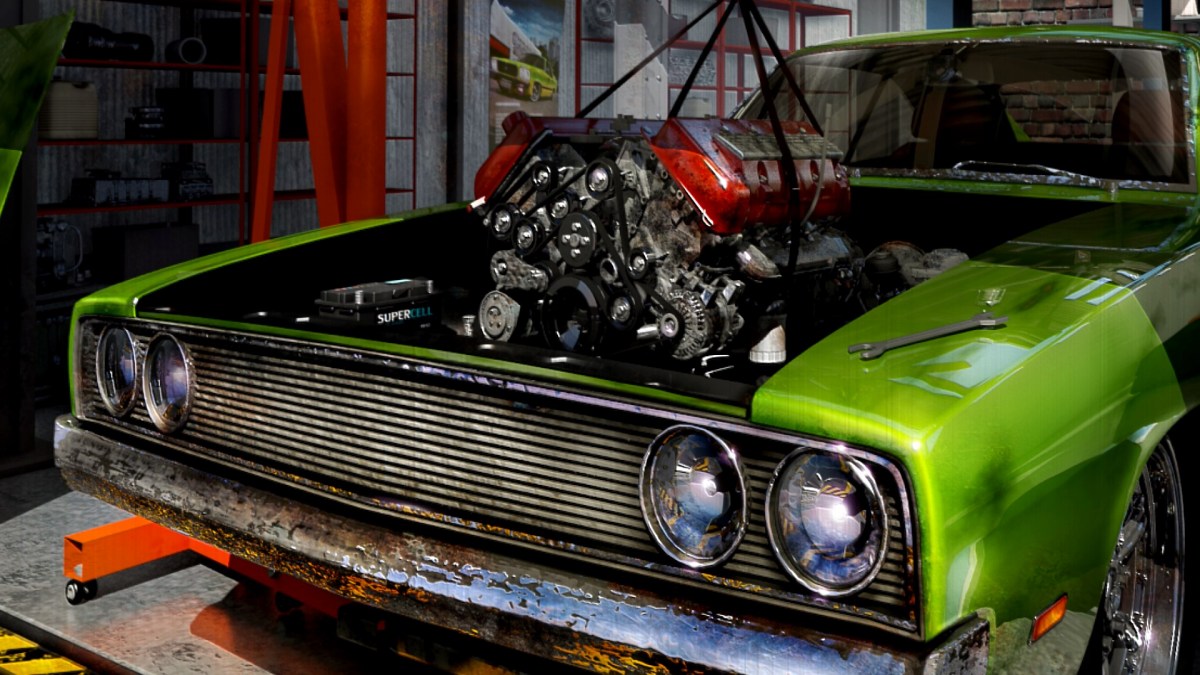 My other half has taught me a lot about cars over the years. I can’t tell you how many we’ve owned in this time – I lost count after the third Mark 4 Golf, the second Audi A3, the two Ford…somethings and the countless others. As he is an appreciator of older cars, things tend to go wrong with them…a lot. When you’re picking up two-decade-old cars with up to seven or more previous owners, you have to accept that they’re going to need attention somewhen.

Thankfully, he is a genius who has MacGyver’ed the hell out of some scary situations when something has unexpectedly gone wrong. He might be someone who knows the difference between his nuts and bolts, but I still struggle with which pedal does what, so he was a good assistant to have by my side when I fired the engine on Car Mechanic Simulator Classic for Xbox.

Car lovers will likely love CMSC. You run your own garage, with aspirations of upgrading all your gear and becoming so fabulously rich your car’s exhaust emission is cash money. At your control is a seemingly bodiless and telekinetic being of great knowing and strength. Once the game loaded past the vaguely interactive launching screen (where you can choose to make an engine fan spin or not,) you’re plonked into a brand spanking new garage. I suspect players who are already familiar with CMS would know what to do, but the game tells you very little in terms of what to do to begin. “I’ll pick it up as I go along,” is a daunting thing to hear from any new business owner.

After a quick exploration in my available surroundings, I discover the two lifting bays, the doors for unlockable spaces like the holding garage and the test path, and the telephone on the desk already ringing with new orders. There is also a computer on the desk where I can order new parts and fancy things for the vehicles. No fluffy dice, sadly.

With a car on the lifter, it was time to get to work diagnosing the little beauty by whipping her wheels off and hunting for corroded parts. Luckily, the truly strong and gifted being you are doesn’t need pneumatic tools to remove stubbornly corroded parts. This is a garage for Gods, not a backyard project car storage! In a similar vein to games like House Flipper, where you switch modes between which tools you need for the job, CMSC requires you to switch between Disassembly/Assembly in order to access different parts of the car and do various things.

The problem is that the interface is shockingly bad to use at first. The menu system has not been optimised well to work on console – it’s a confusing mix of triggers, sticks and d-pad’s to control different selections within sub-menus. The UI is particularly bad when using the computer. Even though I eventually got used to it, I still tripped up and sometimes accidentally order parts I didn’t want and wasn’t sure if/when I’d need them. I often wasn’t even sure what I’d bought, having pressing the confirm button by accident.

If you enjoy making stacks of cash in simulator games, relying solely on buying brand new parts for repairs on the internet is convenient at first, but a bad habit to get into as it gets costly quickly. Oil filters and brake pads don’t cost much, but before long you could be foolishly accepting any job that comes in, working on cars with multiple complex failures requiring a couple of parts that cost hundreds of dollars, as well as a bunch of minor faults.

You can unlock and upgrade your repair bench so you can repair surplus parts, which will save you money in the long run, but only once you’ve spent enough points. I almost made myself bankrupt after unlocking the test path. It might only cost $15k, but I left myself scarily short of funds for my online ordering habit. It sped up the fault-finding on the engine and suspension, but I didn’t notice any significant increase in earnings which made it a slow creep to revitalise my bank balance. If cash flow problems get too fluffy dicey, you can take out a loan because it wouldn’t be a business simulator without one.

CMSC is strangely compelling once you know what you’re doing, and especially if you have your own music playing in the background. It’s flawed in that it’s a bit slow-paced, the graphics are almost a step backwards rather than forward in this rapidly moving generation, and the menu controls are awful until you’re confident enough with them.

It also could do with a few small quality of life improvements such as having a “shopping list” for parts you need available to view while using a computer so you’re not constantly running to and fro to check the vehicle report at the car to remind yourself what you need, or reviewing the XP/Skill system which just feels archaic and not as straightforward as it could be.

Despite this, CMSC would be a relaxing, pleasant experience were it not for the music – a mixture of generally unobtrusive beats and wannabe Ibiza club anthems which pinched my nerves worse than getting grease all over a new pair of jeans. It’s good to load up for spin when you’re waiting for your next AAA, but there’s not much to rip a donut over that you’d want to complete it in a weekend.