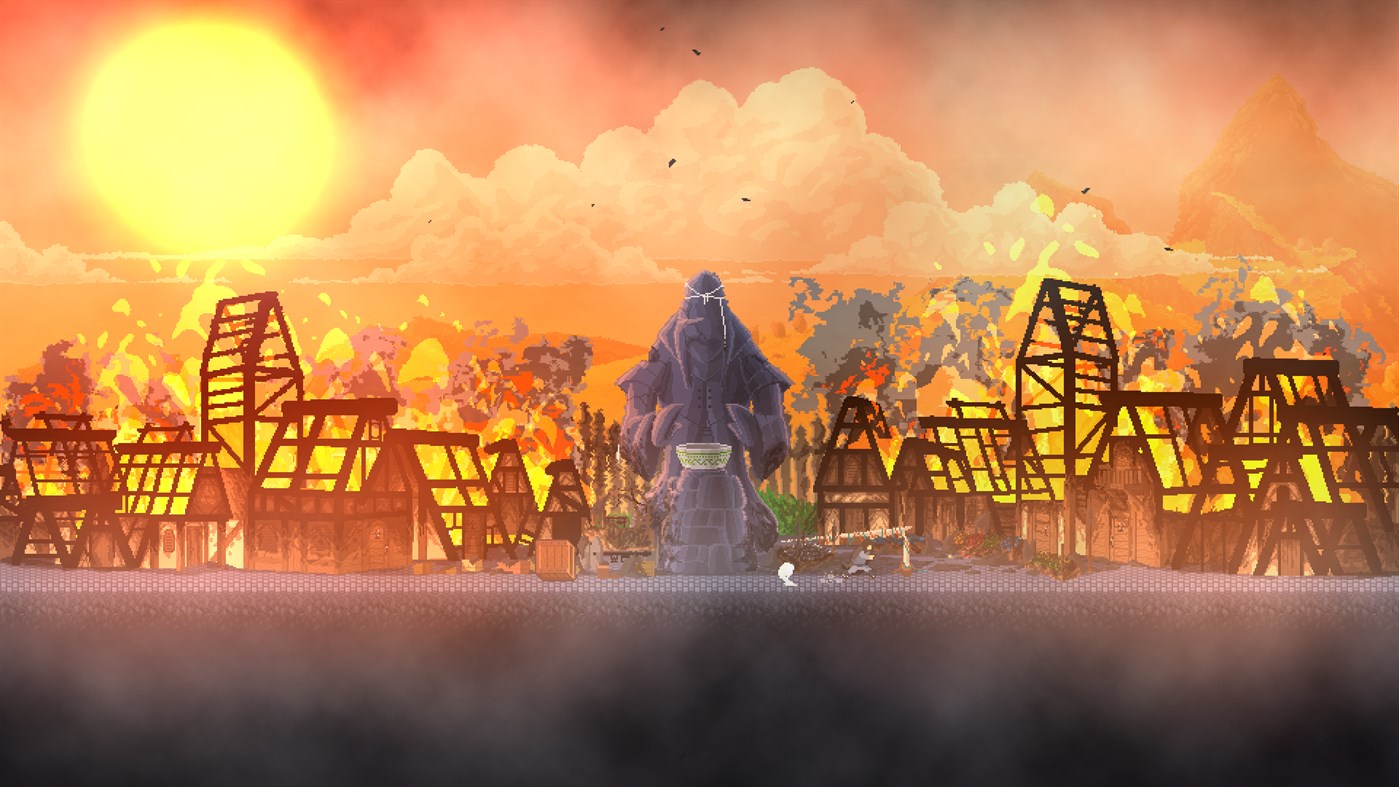 Logic and stealth. Two genres I generally avoid because I am neither a logical nor stealthy being. However, I am easily wooed by stunning 4K pixel art and the promise of fiery fun, prompting me to step outside my comfort zone for this ‘ye olde folke’ stealth platformer.

Your village is under attack and your fellow villagers have been taken as prisoners. You must sneak and scuttle your way through verdant environments, avoiding detection from soldiers to free them and reclaim the town.

Each map lasts a couple of minutes, and the focus is on using the environment to get to the end (relatively) unscathed. Anything green or wooden is flammable, which is excellent for disturbing the peace and causing carnage, but also has the drawback of inadvertently burning down your escape routes and bushes to hide in.

As the title suggests, the main skill is the ability to gather fire and throw it to create distractions or burn the foliage while you corral soldiers out of your path so you can get to the exit. Not to rest on its laurels, all four elements (earth, wind, fire, water – “Go Planet!“) feature at some point with their associated skills, like freezing water to create bridges, or trapping people in ice. Small goals also act as incentives, granting points to level up those abilites.

Each level can be replayed at any time from the map screen allowing you to snatch up those missing power-ups like a hot potato, or speed run through. Rewards await those able to complete a level without being seen. On the flip side, you’re not really penalised for playing more offensively either.

Wildfire is quite forgiving in that you can pass the level by doing the barest minimum, providing you achieve the main level goal. This increases the replayability factor for those who like to dig in. The intended pace is probably closer to around ten minutes per level, which can be shaved down as you become more acquainted. Almost anything on screen might be able to be used in some way, from creating bubbles of water to float to a higher level, or just grabbing a chicken and throwing yourself off a ledge while the chicken does the wing-work.

The level style also gets switched up from time to time, which keeps players on their toes. I thought I had finally got the hang of things when I was thrown into a level requiring you to outrun the lit fuse for a huge stack of bombs, all while still trying to avoid detection by soldiers, and freeing the villagers who had been tied up to enjoy the fireworks at super close range.

I got stuck a bit at times, and subsequently caught and beaten to death. But my interest was captured by the shrines which poetically describe the lands and the story, the subtext of the game being about our connection to nature. After a year where we’ve been forced to sit and spend a lot of time either indoors, or significantly away from other people, a game like this couldn’t come at a better time to serve as a reminder that we are still part of something more than the four walls we’re forced to remain within for now. The great outdoors is precisely that.

Having said that, if you are socially bubbled with someone else, you may want to try out the co-op mode, where you will have to work together in stealth and health order to complete levels. Both solo and co-op hold up well for the engagement factor, and developer Sneaky Bastards has worked hard and done well at creating two balanced experiences.

Gamers that enjoy stealth games will find Wildfire a worthy addition to their catalogue, but some players may find they don’t enjoy having their best-laid plans blow up in their face. The small levels allow you to dip in and out as you feel, and even the checkpoints are reasonably generously placed. It’s not ridiculously difficult that you won’t know what to do, but there will be plenty of restarts and teeth-gnashing, which might put off those with a fiery temper.

Wildfire is published by Humble Bundle and available now on PC, PS4, Xbox (tested), and Switch.