Everyone loves a digger. Big, fun, burly machines with lumbering dirt-scoops. What’s not to like? If you’re so inclined, you can even visit one of four digger-based UK theme parks. Developers Atomicom are hoping the only thing that people will like more than diggers, are diggers on a hostile alien planet.

Structured as an open-ended sandbox, JCB Pioneer: Mars sees you playing as an astronaut stranded on the titular dust-coated planet. Your goal is to survive and then flourish in the harsh Martian environment.

Initially, you can stave off hunger and thirst (and top up the respective meters) by using dropped rations. These, however, will soon run out and you’ll have to build a more sustainable lifestyle. This is achieved by digging up various minerals and materials and using them the build a base full of hi-tech space stuff such as oxygen generators, hydroponics labs, and not particularly hi-tech warehouses. 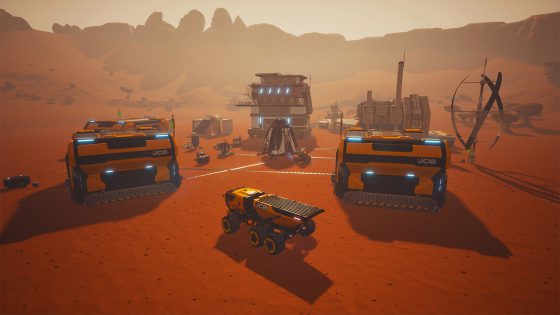 Visually itâ€™s rather accomplished, both docked and in portable mode. The Martian landscape impressively rendered, as are the vehicles and building models. We were particularly impressed with the texture work and the scale of the map. Unfortunately, the humble Switch sometimes struggles to keep up. We had a few framerate issues and encountered more than one bug that required us to quit the game and reload a save file. It was almost enough to make us see red.

It also gets off to a bumpy start, as many mechanics simply arenâ€™t explained. It has a tutorial, but it merely covers driving, not excavating, building or connecting buildings. We had to root around in menus and even turn to YouTube to work out how certain aspects of the base building system worked (hint: if you want to find resources, they’re displayed on your map). As such, we can imagine a few younger players getting frustrated. We even had to restart a couple of times after making a mess of things early on. 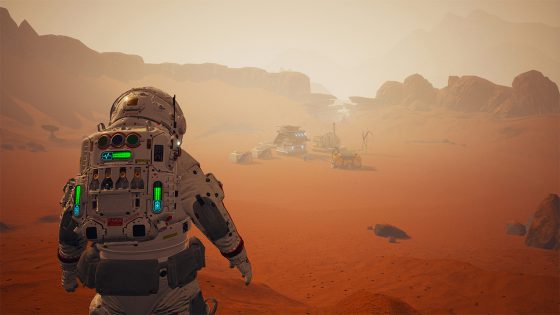 The biggest issue, though, is that the diggers simply don’t feel like diggers. They lack heft and weight, failing to convey the sensation of carving up the crimson ground below them, displacing soil and creating tracks. Although, we suppose this can be partly chalked up to Marsâ€™ gravity.

More damningly, excavating minerals is almost joyless. You point where you want to dig, press a button and watch a limp animation of the digging arm clipping into the soil. If I’m playing a game sponsored by JCB, I want to control the digging arm. I want to see the soil pulled from the ground and held in my metal claw. I want my machine to grunt and lean, and I donâ€™t think thatâ€™s too much to ask for. 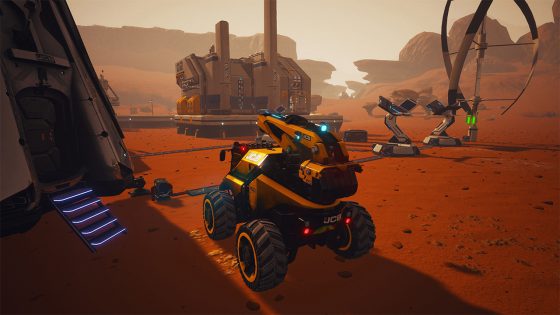 That’s not to say that JCB doesn’t have its fair share of appeal. Thereâ€™s a lot to get stuck into and a wealth of buildings to construct, and we like the idea of having to scavenge for the resources to improve the base. There’s also a decent level of challenge here, as the survival aspects require you to keep an eye on hunger and thirst gauges.

Those only hoping to dip in and out of the action will get quickly overwhelmed, while those in for the long haul will likely wish the core gameplay loop of driving, collecting material and building was more intuitive, rewarding and fun. It’s a decent enough attempt at breaking new ground on Switch, but far from being out of this world.