This single-button auto-runner isnâ€™t one to play when mentally drained. The concept may sound simple enough, tasking you with keeping Odium â€“ a demonic glowing red eye â€“ airborne by tapping and holding the A button, but youâ€™re constantly made to learn by mistakes and start anew. Itâ€™s definitely best suited for early morning game sessions, played after a large cup of coffee and a well-balanced nutritious breakfast.

The challenge lies not within keeping Odium afloat â€“ although there is a slight learning curve to mastering the technique, which the tutorial allows for â€“ but rather within the level design. Odium seeks to destroy the power cores found inside sprawling, clunking, mechanical machines full of spinning gears, pistons, spikes, crushers, and objects on which he can be easily snagged.

There are environmental hazards to contend with as well, such as waterfalls that push Odium downwards and thermal jets that send the spike-covered lead skyward. 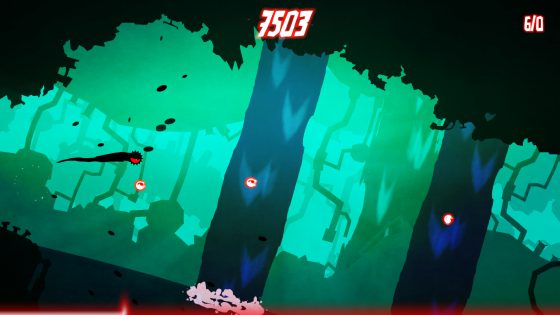 Presumably to stop complacently, a few other sneaky tricks have been employed. The camera occasionally pans in and out, Odiumâ€™s speed can alter on a whim, and most stages feature layouts that twist and turn, or become extremely narrow.

Death comes quickly. Fortunately, this is a rather forgiving experience – each stage grants infinite lives, and thereâ€™s no punishment for failure. A few additional checkpoints per stage may have made for a slightly easier time, though. Some are so far apart that we found ourselves punching the air in jubilation after finally overcoming tougher areas. Often by this point our thumb would start to feel sore, brought on by bouts of button bashing. The ability to use the right trigger instead wouldâ€™ve been most welcome. 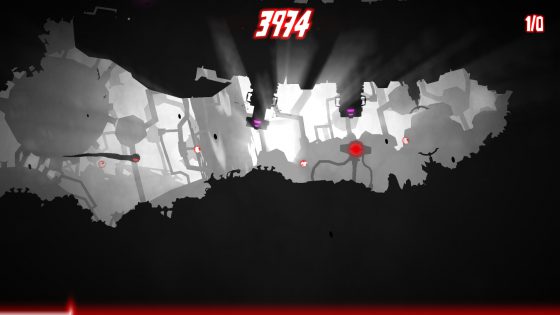 We have no qualms in admitting that we unlocked the achievement for dying 500 times way before reaching the halfway mark. Fifteen stages feature in total, some of which are race-style boss battles with a faster pace than the standard stages. Thereâ€™s an endless mode, too, plus a few unlockable extras to find by seeking out shortcuts and secret areas.

As for replay value, each stage has a number of glowing orbs to collect. These are sometimes used to indicate the safest route ahead, and thereâ€™s at least one achievement linked to collecting them all.

Similar one-button action games have suffered from feeling cheaply made (hello, Flappy Bird) so weâ€™re pleased to report Odium stands out amongst its peers. If drum â€˜n bass/jungle music is your bag, the track listing will have you smitten. The animation is smooth, meanwhile, and the backdrops are busy without ever distracting. The animated cut-scenes help to progress the story, as well as give the game as a whole a sense of worth. 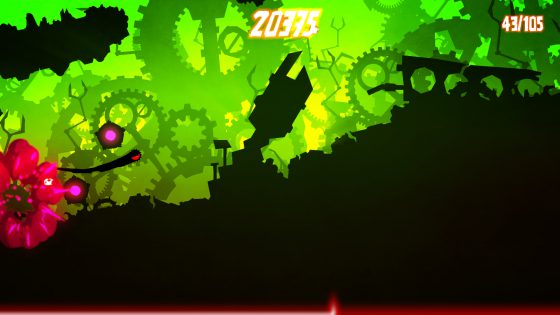 The fact that the music starts over upon dying, instead of playing continuously, is annoying but forgivable – it has been designed to sync with the action. Itâ€™s a feature thatâ€™s a little hit and miss, but when it does work, it makes for a far more engaging experience.

While primarily a single-player experience, we feel developers Dark-1 have inadvertently made something thatâ€™s best enjoyed with friends. Passing the controller around the room to see who can clear the largest chunk of a stage, or who can overcome a tough area, allows plenty of scope for tomfoolery while claiming bragging rights. In this sense it reminds us of Trials Fusion, another good â€˜pass the controllerâ€™ game. On your lonesome, it can feel like a bit of a slog at times.

This is a game that truly demands your attention at every turn, rarely letting you take eyes off the screen for more than a few seconds. It may not be the deepest or most rewarding experience around, but those up for a challenge will still find a strong sense of accomplishment.