Rockstarâ€™s Red Dead Redemption 2 has claimed a second consecutive week at no.1, making it this yearâ€™s Christmas chart topper. Their last Christmas no.1 was GTA: Vice City, back in 2002. 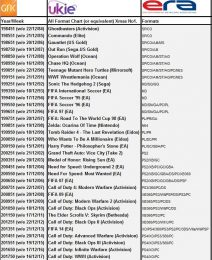 The coveted Christmas no.1 position is usually taken either by FIFA or Call of Duty, both of which can boast of eight yuletide chart toppers each.

Perhaps to celebrate this break from the norm, chart holders Ukie have compiled an infographic detailing all Christmas no.1s from 1984 onwards, starting with Activisionâ€™s Ghostbusters movie tie-in.

FIFA 19 held onto #2 while Call of Duty: Black Ops 4 remained at #3. Battlefield V rose to #4, presumably helped by a minor price cut, while Super Smash Bros. Ultimate moved down to #5.

Elsewhere in the chart, Starlink Battle for Atlas is back at #27 thanks to a hefty price cut â€“ the toys to life title could be found for as low as Â£17.99 last week. Detroit: Become Human re-entered at #34, while 2Kâ€™s Carnival Games made a belated top 40 appearance at #38.

Expect to see FIFA 19 take the top spot next week. The FIFA series tends to see a sales spike the week after Christmas, fuelled by gamers braving the Boxing Day sales to spend their Christmas money and GAME gift vouchers.