The subtitle for this fast-paced RTS is a reference to the hex-based terrain coating the gameâ€™s trio of hostile alien worlds. Under the surface dwell stripy insect-like creatures that rise from underground when a structure is destroyed. Their ferociousness makes us doubt theyâ€™d produce something as delightful as honey, but they do pack an almighty sting, attacking any soldiers in the vicinity.

Sudden onslaughts from these nameless insects â€“ simply referred to as â€˜bugsâ€™ â€“ are one of Hellfrontâ€™s more random features, helping to keep players on their toes. In fact, itâ€™s the only randomised feature. In the name of keeping battles balanced everything else runs like clockwork, so to speak.

What we have here is a hex-based RTS condensed to its absolute purest. Thatâ€™s no exaggeration: battles last around 2-3 minutes and take place on a single-screen, and there are only two buildable objects â€“ a barracks that generates soldiers, and an automated gun turret â€“ which can only be placed on marked locations. Keeping with the theme of simplicity, the controls are remarkably simple too â€“ one trigger is used to shoot, allowing hostiles to be engaged directly by twin-stick shooting, while the other orders troops to move directly in front of your position. 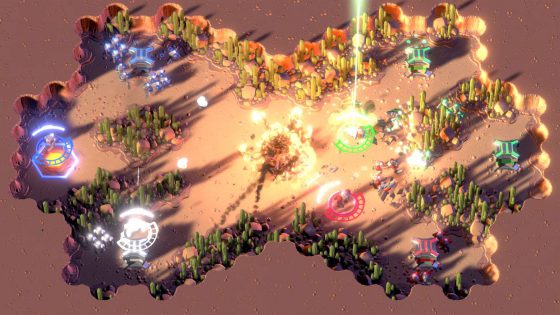 As long as a player has a barracks somewhere on the map, they can respawn. Once all enemy bases are destroyed, the battle is over. The deathmatch mode uses a best-of-three structure, and you can either play on randomised maps or pick a favourite. Some feature bug eggs that erupt when shot, as well as breakable walls that separate rival factions. Other maps have locations to place a handful of structures in close proximity, while others force you to space your turrets and barracks far apart.

dropping a building on an enemy is a legit play tactic

It only takes a few matches to become familiar with Hellfrontâ€™s balancing. Place a turret near an enemy barracks and itâ€™ll be reduced to rubble in seconds. Soldiers can make short work of a turret, but if you engage it directly youâ€™re likely to come worse off. The unpredictable alien swarms, meanwhile, will tear their way through your soldiers unless distance is kept. And if you place a shiny new turret next to another newly erectly turret, they usually explode simultaneously. Time to try something new.

The alien swarms prevent players from re-erecting buildings the moment they explode. Thereâ€™s another, slightly more amusing, mechanic in place – orbital frags. Air dropping a building on an enemy is a legit play tactic, which we imagine was naturally introduced during development. Be warned though, as itâ€™s also possible to kill your own captain this way. Itâ€™s akin to blowing yourself up during a heating bout of Super Bomberman.

That comparison is apt because in terms of content and due to the gameâ€™s single-screen nature, Hellfront is highly reminiscent of the Super Bomberman series. 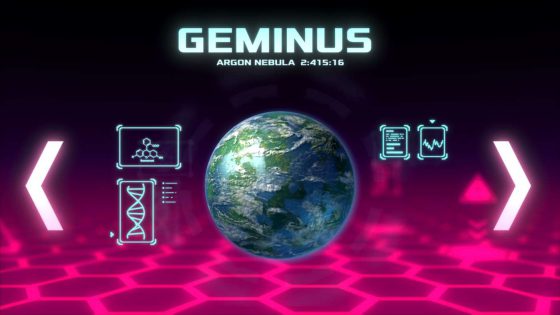 There isnâ€™t a great deal here for the single player gamer, aside from a short three world campaign set against AI. Itâ€™s a pretty basic affair â€“ no story or cut-scenes, no bosses, and very little in the way of surprises. The AI does become progressively tougher though, and there is a three-star ranking system in place. Unquestionably, this is geared towards couch-based MP gamers.

The lack of online play is a minor concern, but not a deal breaker. In fact, the only major issue is that Hellfront reveals its hand far too soon. Play just a few rounds and you will have seen everything apart from the variations within maps. Itâ€™s up to you to facilitate your own amusement with friends, learning how the game is balanced to become more adept to the battlefields. Weâ€™ve had matches that last literally seconds, as well as matches that have gone on for far longer than the 2-minute average. 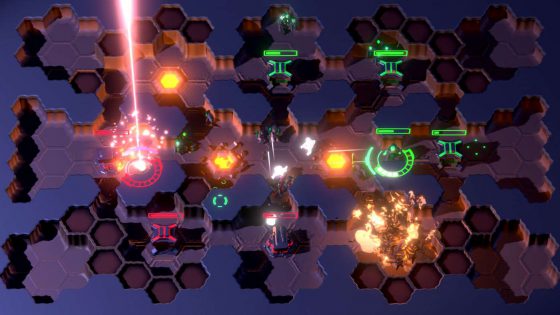 We probably donâ€™t even need to mention that Hellfront is ridiculously fast-paced. Buildings erect in seconds, and soldiers die almost as quickly as theyâ€™re spawned. Thanks to the accompanying thunderous sound-effect, it feels good to slam buildings into the ground in quick succession, and dominating the battlefield by pushing the enemy back is satisfying.

The presentation is likewise bold and brash. The battle narrator sounds as if theyâ€™ve made the jump from a â€˜90s beatâ€™em up, and thereâ€™s a nice line of screen-filling explosions. We also approve of the catchy electric guitar riff that plays at the end of each battle.

Hellfront is an impressively designed debut title from the newly formed indie collective Thunderful; a simple game with no bloat or filler, housing the perfect amount of core mechanics to keep battles tight and tense.

Itâ€™s an easy recommendation for those who regularly have friends over for late-night snack-fuelled gaming sessions. Everybody else should remember the boy at school who received Super Bomberman for Christmas but had no friends to play it with.