This crowd-funded action platformer is a remarkable collaboration between a father and his young daughter. A spiritual successor to Capcomâ€™s seminal Ghouls â€˜n Ghosts, it borrows more than a few ideas and mechanics, only here the relentless spear lobbing is accompanied by a side-line of elusive childhood innocence.

The storyline is especially twee involving the titular Princess and her ghostly canine companion out to recover the scattered pieces of a rickety time-altering robot.

Donâ€™t let the child-like nature of the gameâ€™s premise fool you. Battle Princess Madelyn is for battle-hardened gamers weaned on the likes of the aforementioned Capcom classic, offering an arcade mode with â€˜old skoolâ€™ sensibilities and a more involving story mode with light Metroidvania elements.

Both are as tough as their inspiration, if not tougher. The slow-burning story mode requires a degree of commitment, being surprisingly time-consuming, while the shorter arcade mode demands level layouts and enemy locations be consigned to memory. 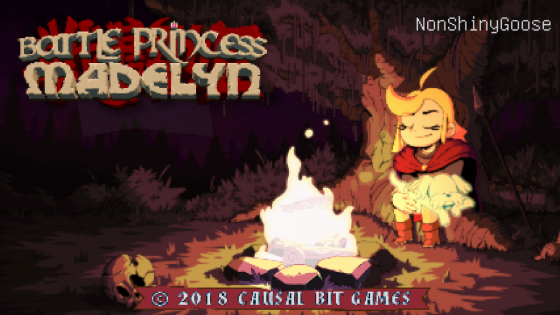 Both modes begin in the best possible fashion â€“ with a glorious homage to Ghouls â€˜n Ghosts opening graveyard stage, complete with ghoulies that spring out from behind tombstones, and a rousing musical score. Compared to whatâ€™s to come this stage is relatively straightforward, giving chance to acquaint with the controls and the three-strike damage system. Take too many hits and poor Madelyn is forced to run around in an old-fashioned nightdress. We guess polka dot underwear would’ve been a step too far.

The arcade and story modes soon reveal their own unique foibles and peculiarities. The biggest problem with arcade mode is that itâ€™s authentic to a fault. Thereâ€™s no save facility, so all progress is lost when returning to the main menu. Thatâ€™s to say, it must be completed in one sitting. Each level â€“ which are arrangements of the story mode stages â€“ grants a handful of lives, and there are no additional 1-UPs.

Madelyn does at least begin arcade mode with a few additional skills, including a double-jump not unlocked until story modeâ€™s second boss battle. Fitzy, Madelynâ€™s canine chum, can also bite enemies from the outset; another skill not gained until later elsewhere. 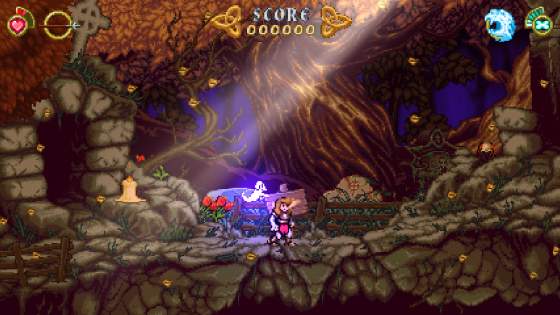 Once the stockpile of lives has been depleted, youâ€™re placed back at the beginning of a stageâ€¦ which is what youâ€™d expect for an arcade-like experiance. Indeed, for the most part, itâ€™s akin to playing a long-lost arcade game, albeit one that requires considerably more time and effort. This isnâ€™t something youâ€™ll breeze through in an hour or two.

a demanding experience in more ways than one

The biggest obstacle to bear in mind is that Battle Princess Madelyn uses the universally disliked knockback feature. When Madelyn takes a hit sheâ€™s propelled backwards, often into harmâ€™s way. While it definitely helps BPM feel quintessentially retro, itâ€™s also the cause of much frustration. The second stage in arcade mode, for instance, entails traversing dozens of lily pads â€“ take a hit, and youâ€™re almost guaranteed to end up in a watery grave.

All but a minor hiccup when it comes to the gameâ€™s third stage â€“ a colossal cave filled with dozens of stalactites to leap across. Some of these have projectile spitting snakes wrapped around, causing Madelyn to be knocked back and halting progress until the location of every snake has been memorised and the safest route found. To be blunt, weâ€™d gladly never step foot in this cave ever again â€“ it took us two entire evenings of play to overcome. Thereâ€™s also a puzzle to solve here, requiring buttons to be pressed in sequence, which is off the beaten track and in the opposite direction to the few signposts guiding towards the exit. Particularly when taking on this stage in story mode, more than a few peculiar omissions come to light. 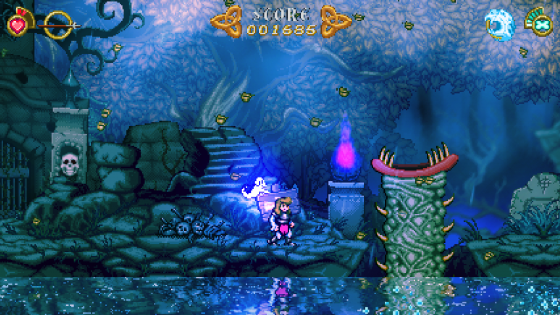 This is a demanding experience in more ways than one. The story mode has fetch quests but no quest tracker, forcing you to remember which towns quest givers are located. These quests mostly entail finding hidden items, requiring exploration to discover, but thereâ€™s no map and neither can Madelyn look up and down to scout locations. This is more problematic as it may seem, resulting in countless instances where â€˜leaps of faithâ€™ must be performed.

Items are also hidden inside challenge rooms, requiring a key located elsewhere to open. In the absence of a map, Fritzy will bark if an item is nearby. Remembering where these rooms are situated within the labyrinth-like levels helps speed up progress. Case point: the hammer needed to â€˜unlockâ€™ the blacksmith can be found in a challenge room, which we overlooked initially, causing a fair amount of head-scratching and backtracking.

This means story mode involves returning to past stages. Sadly, this mode has far too many arcade sensibilities present to make backtracking pleasurable, and this is despite the presence of warp stones. Stage three rears its ugly head here again because unless we’re mistaken, thereâ€™s no warp stone â€“ if you need to backtrack to this stage, you must warp to stage two and slog your way back through. Itâ€™s at times like this BPM doesnâ€™t feel as if it was play tested by a dedicated team, or perhaps the developers bit off more than they could chew. Indeed, BPM is rather user-unfriendly in places. It wasnâ€™t until a week after launch that something resembling a tutorial was added. 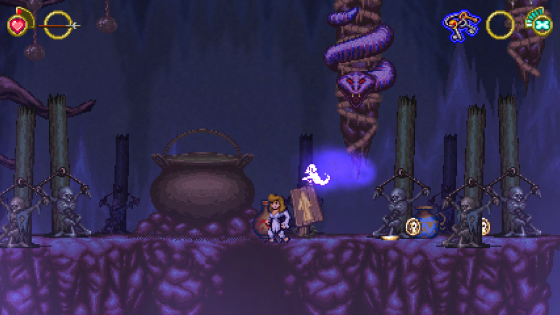 Getting back on track, stage four mixes things up, being a water stage that forces you to take things slow. More exciting: a later stage which requires water levels to be altered. Boss battles are another highlight â€“ tough but fair fights that shouldnâ€™t take more than a few attempts to overcome, learning by mistakes and observing attack patterns.

the presentation is as cute as a button

The Unity engine allows for some alluring effects, with one boss battle showcasing some faux Mode 7-style rotation. Shimmering pools of water, coloured lighting, and more also help BPM to be quite a looker, in addition to the animated intro and enemies each as well-drawn as the last. The music is constantly great too, featuring memorable and catchy melodies.

Battle Princess Madelyn is a bold first attempt from Casual Bit Games, and one that they should be proud of. The pixel art is appealing, the story mode is far longer lasting than expected, and the presentation is as cute as a button overall. An abundance of omissions â€“ some trivial, some not so â€“ means Casual Bit arenâ€™t quite the masters of Metroidvania yet though, with the story mode being something of a bumpy ride.

If youâ€™re only interested in the arcade mode, then most of the gameâ€™s shortcomings shouldnâ€™t get in the way of your enjoyment. This is something that’ll put your finely-honed platforming skills to the test, while occasionally pushing your patience too.