Weâ€™re confident in saying this weekâ€™s 42-strong assortment of new Switch releases is an unprecedented amount.

It looks like there’s a couple to avoid as well, with both Carnival Games and the budget-priced Superhot alike SkyTime receiving a critical mauling.

Here’s what you can expect to see on the eShop this week: 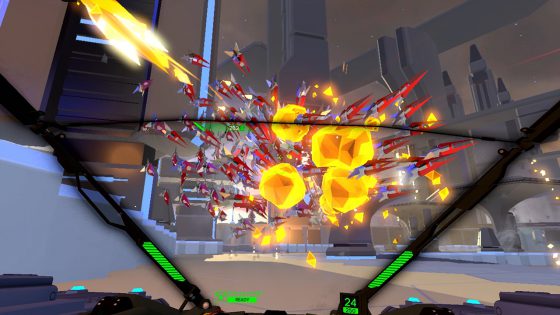 Carnival Games – Â£34.99
Carnival Games brings the party back for the entire family â€“ now for the first time on Nintendo Switch! With both fan-favorite and brand-new mini-games all in one package, Carnival Games offers fun for everyone and can be played alone or with up to three others. Hit home runs, pile the highest stack of cakes, and take your horse to the finish line. 20 total mini-games will have you and your friends stepping right up to win again and again!

Minecraft: Story Mode – Season Two – Â£39.99
Now that Jesse and the gang have vanquished the Wither Storm, saved the world, and become totally super famous heroes, life has gotten a bit more…complicated. With more responsibilities and less time for adventure, old friendships have started to fade — at least until Jesseâ€™s hand gets stuck in a creepy gauntlet that belongs to an ancient underwater temple. Together with old pals and new comrades alike, Jesse embarks on a brand new journey filled with tough choices, good times, and at least one temperamental llama.

Valiant Hearts: The Great War – Â£16.00
This is the story of crossed destinies and a broken love in a world torn apart. All of the characters will try to survive the horror of the trenches following their faithful canine companion. Choose your favorite control mode and experience the game with either a Joy-Con controller or the touch screen.

ACA NEOGEO THRASH RALLY – Â£6.29
â€œTHRASH RALLYâ€ is an original racing game released by SNK in 1991. Two game modes “World Rally Championship Mode” and “Rally Mode” have been featured. Travel through cities and the countryside as you make your way through the various courses.

Arcade Archives URBAN CHAMPION – Â£6.29
â€œURBAN CHAMPIONâ€ is a beat ’em up fighting game, first released by Nintendo in 1984. True to its namesake, fighting men duke it out, fist to fist, for the title of “Urban Champion”! Go into battle with light and heavy punches, as well as dodging and other defensive maneuvers. Take on a 2 player battle, and try to read your opponents’ moves to become the victor!

Astebreed – Â£10.39
Everything is riding on you! The game features vertical-scrolling, side-scrolling, and rail-shooter perspectives all seamlessly integrated alongside each other in brilliantly laid out 2.5D visuals.

BRAWLHALLA – Free
Brawlhalla is an epic free-to-play platform fighting game. Join casual free-for-alls, queue for ranked matches, or make a custom room with your friends. Millions of players. Frequent updates. Over thirty unique characters. Come fight for glory in the halls of Valhalla!

Battlezone Gold Edition – Â£29.99
Blast through a thrilling rogue-lite campaign for 1-4 players where different environments, enemies and mission types are blended together. No two playthroughs will be the same!

Chalk Dash Carnival – Â£5.40
Guide the stick figures running about the blackboard to the finish line! You can scrawl chalk lines directly onto the screen by using the touch controls!

Crashlands – Â£13.49
Play as Flux Dabes, a galactic delivery truck driver whose latest shipment gets interrupted by a megalomaniacal alien named “Hewgodooko” who tears her ship to pieces looking for useful tech. Crashlanded on Woanope, you must fight, tame, craft, quest, bossfight, and adventure your way to domination of all the things so that you and JuiceBox, your trusty sidekick/supervisor/robotic cargo palette, can send a message to the Bureau of Shipping and get those packages delivered!

CricktoGame: Nintendo Switch Edition – Â£4.49
CricktoGame is the game of skill in solving puzzles that will take you to a new level of fun. It’s easy to play and fun for all ages.

Full Metal Furies – Â£14.99
FULL METAL FURIES puts an emphasis on team play with a unique combat system where everyone is important. Work together to defeat special enemies, string organics combos to deal massive damage, and save a war-torn world that is battling itself to extinction. Play on the couch or online with friends, and make it a party for up to four players! Or go solo in single-player, and show off your skills through a Pick 2 quick-switch system that retains all the nuances of multi-play.

Forgotton Anne – Â£15.99
Forgotton Anne is a seamless cinematic adventure with meaningful storytelling and light puzzle platforming. You are Anne, the enforcer who keeps order in the Forgotten Lands, as she sets out to squash a rebellion that might prevent her master, Bonku, and herself from returning to the human world…

Moonlighter – Â£22.49
During a long-passed archaeological excavation, a set of Gates were discovered. People quickly realized that these ancient passages lead to different realms and dimensions â€“ providing brave and reckless adventurers with treasures beyond measure. Rynoka, a small commercial village, was founded near the excavation site providing refuge and a place for adventurers to sell their hard-earned riches.

Picture Painting Puzzle 1000! – Â£4.59
According to numbers at the side of the grid, fill in or leave cells blank to reveal a hidden picture.

Operation Pig – Â£8.99
You are Special Agent Wood and you have worked in the most dangerous missions. You have saved your country hundreds of times. You have been decorated for your courage on several occasions, and over the years, you have become the most feared agent. But now you must be ready for what will be the most dangerous mission that you have faced. The president needs you for a last job that has been called: OPERATION PIG.

Noir Chronicles: City of Crime – Â£13.49
Step into the shoes of Alfred Fox, a private eye with a knack for getting into trouble, and confront the danger looming over your old flame, Barbara Le Purr. Using your own intuition and wide investigation techniques you will follow the intrigue and face many, sometimes deadly, consequences.

Rage in Peace – Â£10.79
Rage in Peace is a side-scrolling adventure game that tells the story of Timmy Malinu, an emotionally numb 27 years old actuary who only has one dream that sets him apart from most people: to die asleep in his pajamas, in the warmth of home, in peace, and with no drama.

Road Redemption – Â£17.99
Road Redemption is an action racing game where you lead your motorcycle gang on an epic journey of pursuit, blood, and speed. Through your travels, you will upgrade your character, bike, and weapons by completing races, assassinations, robberies, and more.

Shadow of Loot Box – Â£7.99
Shadow of Loot Box is an attempt to present what video games can become in the near future. Each level of this shooter is a reference to a popular trend in the modern game development industry. Will you be able to overcome the thorny path full of microtransactions, loot boxes and bugs, resisting the temptation to use the in-game store?

Saboteur! -Â£6.29
Saboteur! is a classic retro game hit made by Clive Townsend in 1985 for the ZX Spectrum 8-bit computer. In 1985 Saboteur! received prestigious award “The Crash Smash” from Crash magazine and was high-rated with 93% score.

Rogue Legacy – Â£10.99
Rogue Legacy is a genealogical rogue-“LITE” where anyone can be a hero.

SkyTime – Â£2.69
SkyTime is a 3D platformer in which you slow time, dodge bullets, destroy turrets, and overcome obstacles!

Townsmen – Â£17.99
Develop your tiny village to a grand medieval empire with a thriving economy and happy villagers! Find spots for mining ore, harvest the crops of your farms and collect coins as taxes from your folk. Build jousting fields, taverns, marketplaces and beautify your city with impressive statues, magnificent monuments and lush gardens. But there are also dangers lurking close by. Bandits are in the area, looking to plunder and pillage your peaceful town. Build barracks, guard towers and recruit brave soldiers to protect your citizens from harm. You rule the whole empire from your castle and make sure your inhabitants have fun and stay happy!

Timber Tennis: Versus – Â£1.79
Take part in the annual Timber Tennis world championships – use your special skills, watch out for super shots, and collect prizes to beat all the rivals and reach the grand final! Unlock all the characters (including Princess, Hipster, Boxer and many more), win trophies, and compete in local or online multiplayer mode with your friends!

Solitaire – Â£8.79
The card game that everyone loves.

Trine Enchanted Edition – Â£13.49
Trine Enchanted Edition is the origin story for the three unlikely heroes of Trine – Amadeus the Wizard, Pontius the Knight, and Zoya the Thief. Spellbound by the magical object Trine, the heroes must join forces to overcome obstacles and puzzles in a fully interactive physics-based world, battle the undead and their minions, and restore balance to the kingdom!

Varion – Â£10.29
Team up or fight for yourself, build dirty tactics and take advantage of ever-changing dangerous stages in up-to-4 player restless battles to become the supreme ruler of your living room!

The Walking Vegetables: Radical Edition – Â£9.99
Buy weapons, develop your skills and roam from city to city to take out waves of evil veggie monsters. Beware epic bosses waiting in each city to mash you up!