Hereâ€™s an example of the age-old saying â€œas one door closes, another opensâ€ â€“ this month sees the final issues of both gamesTM and GamesMaster hitting newsstands, but just as word broke of their closure came the reveal of a new gaming magazine.

At a time when print is seemingly on the way out, its reveal came as quite the surprise. 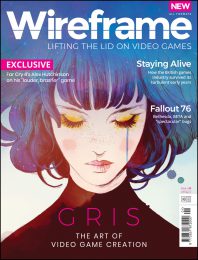 Wireframe â€“ published by Raspberry Pi Press â€“ appears to be a response to the frequently heard criticism that gaming magazines are out of date by the time they reach stores. For not only is it a fortnightly publication, but it also mostly focuses on features that arenâ€™t time-sensitive, ditching news and other gaming mag staples.

Wireframe promises to lift the lid on video games, filling its pages with development-focused features, complete with insight supplied by developers themselves. In this issueâ€™s â€˜Toolboxâ€™ section, Howard Scott Warshaw â€“ creator of some of the Atari 2600â€™s bestselling games â€“ shares tips for great game design, while Will Luton examines the curves, probabilities and formulae that shape the likes of Fortnite, Hearthstone and similar games.

It looks like we can expect a pleasing amount of retro gaming content too. Issue #1 boasts features on the history of the British gaming industry, the C64 â€˜demakeâ€™ of Portal, and a four-page piece on the celebrated Japanese developer Treasure. Reviews and previews still feature too, we should note, with this issue casting a critical eye on Darksiders III, AC Odyssey, No Manâ€™s Sky Next, and more.

Wireframeâ€™s debut issue is out now, available for Â£3. Alternatively, a PDF can be downloaded for free.

Considering the UK is home to several large development studios and countless indie outfits, our hopes are high that Wireframe can carve its own niche into the market…or maybe even create a market of its very own. It certainly has the potential to do so.