If you thought it was odd that Sony expected gamers to cough up Â£90 for a PlayStation Classic pre-order before the full line-up was revealed, then you arenâ€™t alone. Initially we believed this was down to Sony still penning licensing deals but having seen the full list â€“ revealed earlier today â€“ part of us thinks they were fearing a minor backlash too.

The good news is that – with perhaps the exception of I.Q.: Intelligent Qube – all the titles present are well-known. Most genres are covered too. The bad news? There are some very questionable choices and highly peculiar omissions. Sony clearly didnâ€™t want to loosen their purse strings here, preferring to take a few cheaper options when assembling the line-up.

Before delving into the omissions and peculiarities, we will note that weâ€™re pleasantly surprised to see both Resident Evil: Directorâ€™s Cut and GTA present. GTA, infamously, was given an 18+ rating at launch while RE was censored in Europe before finally landing a 15+ age rating. While the PS Classic is clearly aimed at the mature end of the market, we still believed Sony would keep the content relatively family friendly. Considering some of the PSoneâ€™s best games werenâ€™t afraid to throw a bit of claret around, itâ€™s good to see this wasnâ€™t the case. Bring on the gore. 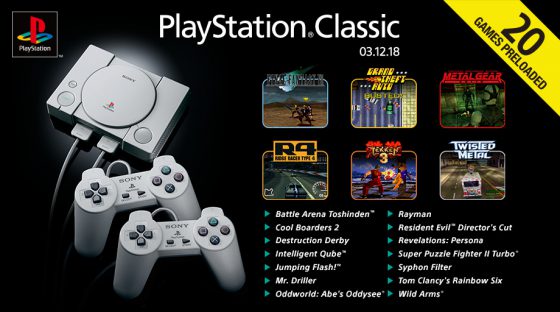 Itâ€™s good news that Mr. Driller and Super Puzzle Fighter II have made the cut too, being two of the finest puzzlers for the system. Revelations: Persona is an unexpected but welcome inclusion, likewise.

Itâ€™s far less pleasing to note that several big franchises are entirely absent. No Crash Bandicoot, Spyro or Tomb Raider games feature, despite being synonymous with the system. The omission of Crash and Spyro is likely due to two things: high licensing costs, and the fact that remasters are available of both. License holders Activision were hardly likely to agree to a deal that may harm their profits.

The lack of a Tomb Raider game is a more of a mystery, however. A Twitter â€˜randoâ€™ suggested that the now defunct Core Design still owns the rights to these games. The fact that Square-Enix re-released PSone Tomb Raider on PS3, PSP and PS Vita in 2010 tells us a different story. Our verdict: licensing was too expensive.

With no Crash or Spyro, weâ€™re left with Rayman and Jumping Flash to carry the platforming genre. A lack of Dual Shock controllers also meant Ape Escape was a no-no, leading us to believe Sony already has a PS Classic follow-up in the pipeline with a bunch of analogue-control focused titles. Adding further fuel to this, a lot of games featured here â€“ such as Destruction Derby and Twisted Metal â€“ had superior sequels which would be far more welcome.

Sony has, at least, included Cool Boarders 2 â€“ the best in a somewhat middling series.

Itâ€™s also evident that licensing issues have prevented the PS Classic from being an all-encompassing collection of the systemâ€™s finest, as thereâ€™s no WipEout or Gran Turismo â€“ two titles that featured licensed music from renown artists. US gamers also seem to be miffed about the lack of Jet Moto, a series that didnâ€™t perform to well outside of the states.

The biggest oddity from todayâ€™s reveal, and by some margin, is the inclusion of Tom Clancyâ€™s Rainbow Six. Itâ€™s a well-known series, for sure, but the PSone version was renowned for being terrible, gaining review scores as low as 3/10. All signs suggest Sony wanted a first-person shooter to feature in the line-up and this was one of the few options available. 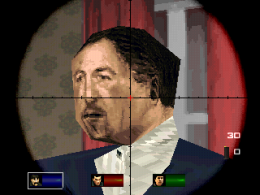 As much as we wouldâ€™ve liked to have seen Final Doom and Quake II, all of Idâ€™s licenses are now under Bethesdaâ€™s wing. The fact that Activision published Quake II on PSone would doubtlessly make for a licensing nightmare, too.

Our Twitter feed has been buzzing with responses to the line-up, and weâ€™ve also paid close attention to the comments on Sonyâ€™s Facebook page. While the presence of Metal Gear Solid, Destruction Derby and FF VII and the few other big hitters included is enough for some, itâ€™s clear that thereâ€™s a huge sense of disappointment. What should be a celebration of all things PlayStation is, sadly, missing several key titles, and for reasons that mostly appear to be money related.

We never expected Sony to have a limitless budget, but we didnâ€™t expect them to chuck in an absolute stinker (Rainbow Six) just to fill in a gap either. The pressure must really be mounting to get the PS Classic into stores for Christmas, and thatâ€™s a real shame.