The Switch eShop seemingly isnâ€™t affected by Red Dead 2 hype, as this weekâ€™s line-up of new titles in the biggest yet â€“ 37 games in total, along with a handful of demos. Thereâ€™s a new â€˜Gaming on The Goâ€™ sale underway too, which includes a bunch of horror games.

Speaking of all things Halloween, thereâ€™s fair few new horror adventures out this week including a conversion of the Wii U hidden object game Dracula’s Legacy, the well-received Yomawari: The Long Night Collection, cartoonish puzzler Friday the 13th: Killer Puzzle â€“ which Nintendo Life rather liked â€“ and the self-explanatory, and bargain priced, Halloween Pinball. 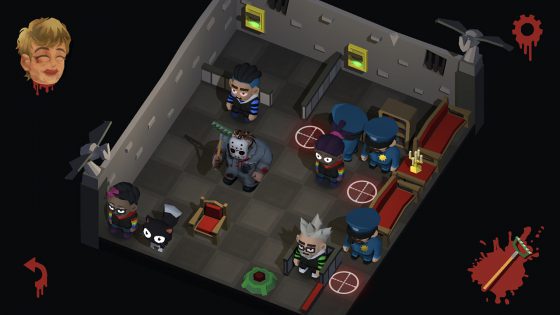 There are more games aimed at younger gamers than what we usually see too. These include Nickelodeon Kart Racers â€“ which has gained mixed reviews so far – Paw Patrol: On a Roll, and the Splatoon/Tony Hawkâ€™s hybrid Crayola Scoot.

You might want to save your credits (read: cash) for next weekâ€™s Johnny Turbo’s Arcade: Heavy Burger though. Itâ€™s an intriguing top-down shooter that involves dashing through several Data East classics while all guns blazing.

As for new stuff, thereâ€™s the SimTower alike Project Highrise: Architect’s Edition, a conversion of the mobile hit Storm In A Teacup, the anime brawler MY HERO ONE’S JUSTICE, and the highly regarded puzzler 7 Billion Humans.

Take a look at the full Switch eShop line-up below: 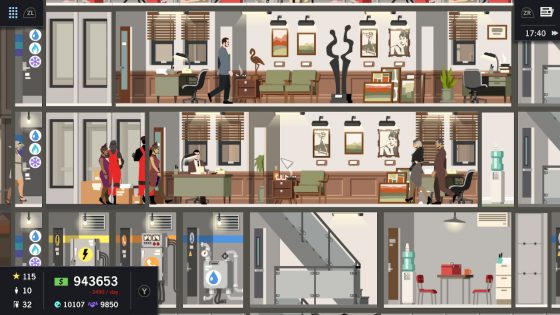 Project Highrise: Architect’s Edition – Â£29.99
Your job as the architect and developer is to build world-famous skyscrapers that will be the envy of the entire city, masterpieces of art and engineering. But a skyscraper is more than just steel and glass, itâ€™s an intricate ecosystem, full of people that live and work in the building. They become a complex machine that needs your steady hand to keep it running smoothly and efficiently.

Nickelodeon Kart Racers – Â£29.99
Hit the Slime-filled race tracks with Nickelodeon Kart Racers! Select a racer from one of your favourite Nickelodeon series, including SpongeBob, Patrick, and Sandy from SpongeBob SquarePants, Leonardo, Raphael, Michelangelo, and Donatello from Teenage Mutant Ninja Turtles, Arnold and Helga from Hey Arnold!, & Angelica, Tommy and Reptar from Rugrats.

Dracula’s Legacy – Â£17.99
Haunted by frightening dreams about her forgotten past, Isabella – along with her fiancÃ© – travels to an old ghost town, the only clue to her origins that she has been able to dredge from the depths of her lost memories.

Just Dance 2019 – Â£49.99
Wherever life takes you, Just Dance 2019 will keep you dancing for hours with an insane amount of content for the whole family to enjoy! Just Dance 2019 comes with over 40 new and fun songs, and access to more than 400 songs available with Just Dance Unlimited. Every copy of the game comes with 1 month of free access!

Yomawari: The Long Night Collection – Â£35.99
Traverse the haunting world of Yomawari: Night Alone as a young girl searches for her sister, or share in the terror facing schoolgirls Yui and Haru in Yomawari: Midnight Shadows. Uncover the mysteries plaguing a rural Japanese town, hide from the things lurking in the night, and maybe get home alive…

Let’s Sing 2019 – Â£29.99
Let’s Sing 2019 – Platinum Edition – Â£49.99
Itâ€™s your time to shine! Whether you’re training your voice solo or celebrating a karaoke party with friends and family â€“ it will be a success with Letâ€™s Sing 2019â€™s new game modes and features. The latest version of the Let’s Sing series features cutting-edge artists.

MY HERO ONE’S JUSTICE – Â£44.99
Fight for your justice in MY HERO ONE’S JUSTICE! The popular manga and anime series clashes head-to-head and Quirk-to-Quirk in this 3D arena fighter. Pave your path and choose between hero or villain and battle through iconic moments.

Windjammers – Â£13.49
Windjammers is a fast-paced head-to-head arcade game where two players face off on a court, and throw discs at the opponent’s goal zone to score points. Incredibly fun and intensely addictive, Windjammers is the adrenaline rush youâ€™re looking for!

Paw Patrol: On a Roll! – Â£34.99
No job is too big, no pup is too small! The PAW Patrol is ready to save the day in Adventure Bay on 16 exciting rescue missions, but they can only do it with your help! Help each pup use their unique abilities to rescue friends and keep their community safe.

Crayola Scoot – Â£34.99
Creativity wins in this colourful freestyle scooter championship! In Crayola Scoot, more tricks mean more colour â€“ and colour can change the world in impossible ways. So get ready to take on Scoot Legends in a rainbow of thrilling events, or grab 3 friends for a split-screen colour clash.

DEADBOLT – Â£8.99
DEADBOLT is an extremely challenging stealth-action hybrid that allows you to take control of the reaper to quell the recent undead uprising. Play and complete missions given to you by the mysterious fireplace as you become the avatar of death.

1001 Ultimate Mahjong 2 – Â£7.99
Mahjong Solitaire has attracted players from around the world for decades – it took us just a couple of years to gather their experience into one, beautifully crafted proposal. What is so addictive in this subtle, yet demanding at a time, pair matching game? Now you can find the answer on your favourite gaming console!

7 Billion Humans – Â£11.99
Automate swarms of office workers to solve puzzles inside your very own parallel computer made of people. A thrilling follow-up to the award-winning Human Resource Machine. Now with more humans!

Arcade Archives ALPHA MISSION – Â£6.29
â€œALPHA MISSIONâ€ is a shooting game released by SNK in 1985. Equip Power Armor as you fight and experience one of the most innovative shooting games of its time. Collect parts to assemble eight types of Power Armor to use strategically as you play the game.

ACA NEOGEO STRIKERS 1945 PLUS – Â£6.29
â€œSTRIKERS 1945 PLUSâ€ is a shoot ’em up game released by Psikyo in 1999. Make use of Shots, Super Shots, and Support Attacks to make your way through a chaotic dogfight!

Arcade Archives Ninja-Kid II – Â£6.29
â€œNinja-Kid IIâ€ is an action game that was released from the UPL in 1987. This ‘Ninja-Kid II’ has been developed in after three years from the ‘Ninja-Kid’. Ninja-kun who got a new action and weapons will aim to overthrow of Ashura.

ACA NEOGEO SAVAGE REIGN – Â£6.29
â€œSAVAGE REIGNâ€ is a fighting game released by SNK in 1995. In the first half of the 21st century, 10 great fighters have gathered to compete in King Lion’s Battle of the Beast-God! Howling fists and flying weapons! A completely new style of fighting game.

Aqua TV – Â£8.99
Want to turn that big screen TV into a stunning virtual aquarium? Then get Aqua TV – a fully customisable virtual aquarium that lets your Nintendo Switch do just that! Choose a tank then change the floor, walls, decoration â€“ and of course fish â€“ to make the aquarium YOU want!

Black and White Bushido – Â£9.99
Fight for control of the light or the dark in multiple arenas, hiding from your foes and seizing objectives. Pick up items and use them to surprise, maim and trap your opponents in a way only a true warrior can.

Car Quest – Â£7.69
Buckle-up for an epic road trip through a colourful world of puzzles and adventure. Use driving skills and puzzle solving abilities to find missing artefacts and piece together the broken world of Blocktaria.

Chicken Range – Â£22.49
The object of the game is to shoot the chickens using an array of different weaponry! Gameplay is set over a field twice as wide as the screen, so you must be constantly moving your aim side to side in order to reach the whole game field.

Eternum Ex – Â£12.99
Eternum Ex is a retro platform video game with the look and feel of the â€™80s arcade cabinet games.

Friday the 13th: Killer Puzzle – Â£12.99
Become horror icon Jason Voorhees and stalk campers across 150+ levels in the most gruesome puzzle game ever! Solve murderlicious puzzles to rank-up and unlock new weapons and special attacks. Help Jason terrorize victims from the campgrounds of Crystal Lake to the high-rises of Manhattan, from supermax prisons to space stations… and beyond!

PIANISTA – Â£17.99
Beautifully tuned music and marvellous technique awaits. Lay your fingers on the controller to explore the sound of the piano.

Pinstripe – Â£13.09
Pinstripe is an emotionally charged adventure through Hell created entirely by a one-man team over the course of five years. Play as Teddy, an estranged ex-minister forced to venture through the frozen afterlife in search of his three-year-old daughter Bo Thomas Brush, the creator of award-winning indie games Coma and Skinny, reveals a gorgeous art style, breathtaking score and chilling story.

Puzzle Wall – Â£6.99
In the spotlight and under pressure, a series of walls are coming straight at you! Each wall has a gap cut out in a different body shape.

Storm In A Teacup – Â£2.99
A boy, a dream and an enchanted teacupâ€¦ it’s time for an exciting experience you’ll never forget! Storm’s brother, Cloud, has created an amazing dream-like world for you to explore, packed with all kinds of challenges! Guide Storm through each stage solving puzzles, avoiding pitfalls and beating bad guys in this magical platform adventure.

Suicide Guy: Sleepin’ Deeply – Â£5.39
In this new chapter of “Suicide Guy” you’ll be challenged with even more insane puzzles, generated by the surreal dreams of the â€œGuyâ€. You’ll encounter the weirdest of the living beings as you go deeper and deeper into his subconscious. This time, to wake him up you’ll need all your skills.

911 Operator – Â£13.49
Specifically redesigned for Nintendo Switch, 911 Operator lets you put your patience and management skills to the test, whether you’re eager to save lives on the go or want to give out orders from the comfort of your couch with a Nintendo Switch Pro Controller.

Fly O’Clock – Â£1.61
Fly Oâ€™Clock is a tiny, highly-addictive, single and local multiplayer arcade game. Play as a Fly jumping on the clock face while avoiding the clock hands – jump as fast as you can and leave your opponents behind!

Freaky Awesome – Â£11.69
Freaky Awesome is a roguelite with the randomly generated environment, permadeath and a whole lot of gradually unlocked content. During the fight, you can mutate into a new form with unique mechanics and quickly adapt to survive. In addition to mutations, you can unlock skills and objects that affect mechanics and gameplay.

Halloween Pinball – Â£1.79
Enjoy Halloween Pinball, a perfect reproduction of a real pinball machine, with all the graphic details and sounds. Discover all the secrets, complete all the missions and become number 1 in the world or the best among your Friends, posting your high score on the online leaderboard.

Startide – Â£8.09
Startide is the new take on the arcade top-down shooter – play as an elite pilot driving the Interstellar Recon Mecha geared with a unique set of weapons and special abilities. Explore the uncharted corners of the galaxy, discover its story and test your skills in epic battles against the most feared space dreadnoughts. 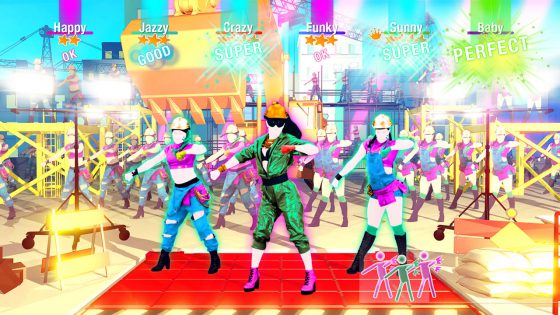 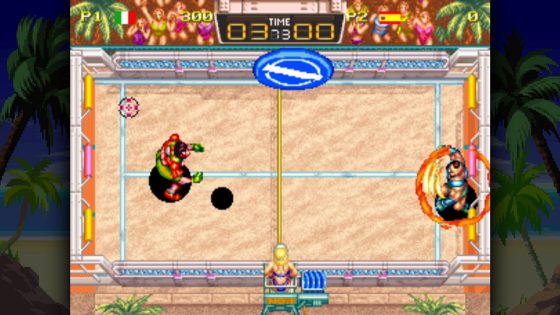 Petite Zombies – 89p
Protect your territory from the invasion of petite zombies. For better game convenience, use the stylus.

Just Dance 2019 – Â£39.99
Wherever life takes you, Just Dance 2019 will keep you dancing for hours with an insane amount of content for the whole family to enjoy! Just Dance 2019 comes with over 40 new and fun songs, and access to more than 400 songs available with Just Dance Unlimited. Every copy of the game comes with 1-month of free access!