Future Publishingâ€™s GamesMaster and gamesTM magazines are about to transcend to the great paper bank in the sky, joining such long-defunct publications as NGamer, The Official Nintendo Magazine, PSM2, and Xbox World.

The next issues â€“ due 1st November â€“ will be the last, with reason cited that neither no longer generates a profit. “Despite the companyâ€™s strong performance overall, unfortunately gamesâ„¢ and GamesMaster are no longer profitable parts of the business, which means that their next issues, on sale November 1st, will be the final editions,â€ said Future. 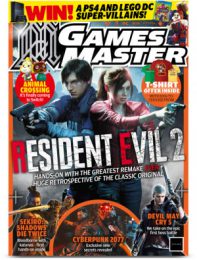 Despite the magazineâ€™s high quality, gamesTMâ€™s closure doesnâ€™t come as a huge surprise. It was launched by Imagine Publishing in 2003 as a competitor to EDGE, but in 2016 Future acquired Imagine, meaning they now had two very similar magazines in their portfolio.

Although gamesTM ran different cover stories to EDGE, as well as featuring a dedicated retro section, the forever shrinking market was bound to reach a point where it was no longer large enough to sustain two mags aimed at the same demographic.

GamesMasterâ€™s closure does come as a surprise, however. Weâ€™re also rather sad to see it come to an end â€“ we can vividly recall buying the first issue in 1993, and have purchased the occasional issue ever since. GamesMaster â€“ originally launched to tie-in with the TV show of the same name – was aimed at the late teen market, and was the only magazine to be targeted at this age group.

When the Official Nintendo Magazine closed in 2014, readerâ€™s subscriptions were also carried over to GM, which we assumed expanded its circulation significantly. Presumably, those readers havenâ€™t stuck around.

Future reports that gamesTM and GamesMasterâ€™s staff will be â€œredeployedâ€ within the company. We hope this doesnâ€™t mean theyâ€™ll spend the rest of their days penning Fortnite and Minecraft bookazines.