The announcement of a fishing mini-game in Red Dead Redemption 2 caused much jubilation. This excitement came as no surprise â€“ fishing is the ultimate pastime for those seeking a means to relax and unwind. A gentle breeze, the calming sound of birdsong, the tranquil stillness of the water, the grating ear-piercing alarm from a fishing rodâ€™s motion detector, a countdown buzzer to inform that there are only five minutes left to beat the competition…wait, this isnâ€™t relaxing at all.

Fishing Sim World makes the world of fishing more exciting â€“ and less relaxing – than it actually is by presenting players with four quick burst 20-minute tournaments. They each have different scoring methods, amongst other minor variations. Bass fishing involves using a boat to find the best fishing spots, with the winner determined by the total length of the five biggest bass caught. Predator fishing is a tad more complex, using floats and lures. Here, the total length of all fish caught is used for scoring. Carp fishing goes by total weight, while the Match Series is essentially the gameâ€™s â€˜quick fire modeâ€™ set in narrow canals and such â€“ the gold mdeal goes to whoever catches the most fish. 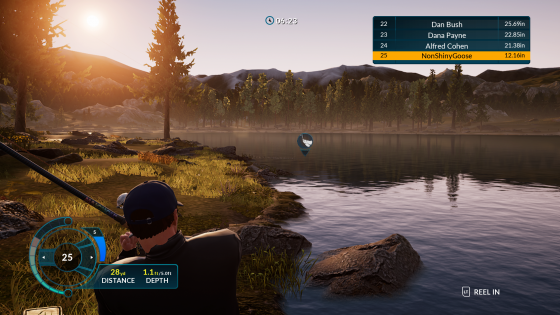 Youâ€™re up against AI opponents in all four tournaments. Their presence is reduced to nothing more than a ticker on the side of the screen, informing of current placings on the scoreboard. This leads us onto our first gripe: the AI will, quite simply, catch a fish every 2-3 minutes. This, of course, means that you must do the same or risk falling behind. It also means that the outcome of every tournament is rather predictable.

With only 20 minutes to spare having a few fish escape your grasp or accidentally catching the wrong breed can cost dearly, and thereâ€™s little time for experimenting with new bait and such. The against the clock nature does, at least, make things reasonably thrilling, constantly trying to catch one last fish before the timer runs out.

The developers clearly understand that casually waiting for fish to bite isnâ€™t the most dramatic of pursuits as most modes involve using four rods at once: three in a stationary rig, and one in your hand (so to speak). The rods in the rig must be cast out in the usual way â€“ thereâ€™s a choice of casting methods and both realistic and basic settings â€“ and the aforementioned motion detector will sound if a fish bites. The noise of one alarm soon grates, let alone the sound of all three chiming at once. Itâ€™s akin to a car alarm going off in your living room. A carp alarm. 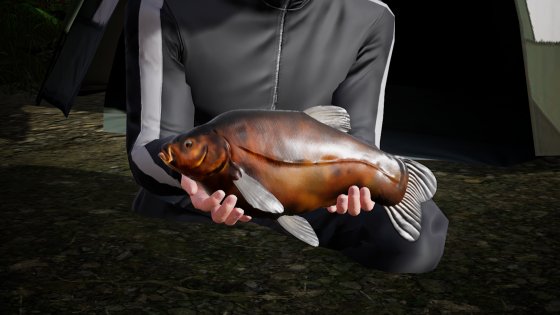 Reeling in a fish takes around 2-3 minutes of gentle analogue stick wiggling, as you try and keep a strong tension without the line breaking. Small fish are the exception, reeled in almost effortlessly. A swift yank or two can significantly speed up landing a larger fish. The physics engine can become a little wonky if landing a fish in a rocky area, but for the most part, it behaves in a realistic manner.

All in-game currency (Tackle Points!) earned from tournaments can be used to buy new rods, lures, bait, lines and â€“ after plenty of saving â€“ a new boat. Oddly, currency is used to enter online tournaments, too. Here you have 60 minutes to catch as many fish as possible while a constantly updated ticker shows your position on the online leaderboard. Winners are announced every few days, earning big virtual bucks. We once managed to catch 32 fish within the hour, making us question how much of a simulation this really is.

Aside from a freedom mode, in which itâ€™s possible to experiment until your heart is content, thatâ€™s it for game types. If Fishing Sim World manages to hook you in, itâ€™ll serve you well. Thereâ€™s a rogueâ€™s gallery of trophy fish to track down – with such names as Mr Angry, Popeye, Slimer and Scudd the Rudd – plus the achievements require serious commitment. The one for completing 25 online tournaments will take 25 hours alone. 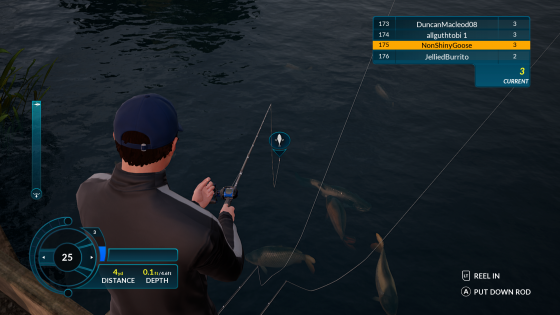 Visually, itâ€™s accomplished enough to warrant the Â£30 asking price. A little sterile in places, but that was perhaps to be expected. The graffiti-covered bridge on the canal location raised a grin, and the ability to occasionally see fish rising from murky depths to the surface is a nice touch. The presentation isnâ€™t without fault, however, as the loading times are peculiarly long given the subject matter. Despite the presence of video tutorials some of the finer points are initially confusing too, and so we wouldnâ€™t hesitate to say that thereâ€™s a small learning curve.

Weâ€™d imagine some avid anglers will easily find additional room for improvement. But until the inevitable bigger and better sequel arrives, most will be perfectly content trying to add Scudd the Rudd and chums to their trophy cabinet.