The recent Dead Cells sparked a debate as to whether the term â€˜Metroidvaniaâ€™ is still relevant, all because it has been some time since weâ€™ve had a new traditional Castlevania or Metroid. It was even argued that todayâ€™s gamers are likely oblivious to Castlevaniaâ€™s existence entirely. On this bombshell, allow us to introduce Pizza Titan Ultra â€“ an eccentric combination of SEGAâ€™s Crazy Taxi and Rareâ€™s N64 sleeper hit Blast Corps.

From Crazy Taxi it takes numerous arcade-like sensibilities, including mission objectives set against tight time limits and the ability to add a few more seconds to the clock by completing deliveries and collecting pick-ups. The only difference here, as you may have guessed already, is that youâ€™re delivering pizzas instead of dropping off passengers.

As for the Blast Corps comparison, it puts a tower block sized mech under your control and it also shares the focus on wanton destruction. The action is viewed from a similar isometric perspective too, accompanied by a fixed camera. 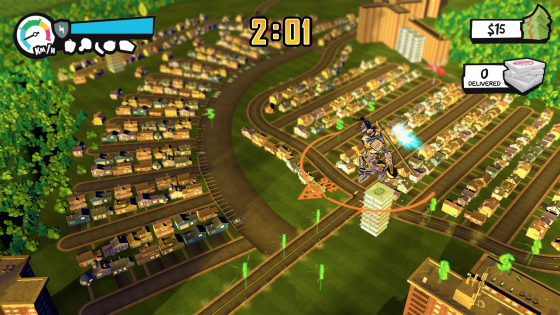 Despite the last-gen quality visuals, Pizza Titan Ultraâ€™s presentation can easily be described as stylish. Thereâ€™s a catchy â€˜90s cartoon-style theme tune, the 2D artwork is well-drawn, and the mech can be kitted out with new parts â€“ some of which feature pop culture references – and colour schemes of your choosing. While new parts donâ€™t increase stats or such all purchases help fill up a gauge thatâ€™ll eventually unlock one of four new ultra-powers, with a super sprint being the starting ability.

The whole shebang is carried by a running joke. While dashing through brightly coloured towns, holiday resorts, and motorways to deliver pizza in record time, a path of destruction is left in the mechâ€™s wake. The ground shakes and buildings crumble. Then comes the punchline: a colossal hole left in the side of every tower block, caused by the mechâ€™s giant fist as it delivers piping hot pizza straight into a customerâ€™s living room.

But like a child telling you the same joke repeatedly, it soon ceases to be funny. The daft premise is Pizza Titan Ultraâ€™s lure, and itâ€™s one thatâ€™s admittedly initially appealing, but itâ€™s hard to shake the feeling the developers struggled to base a fully-fledged game around it. 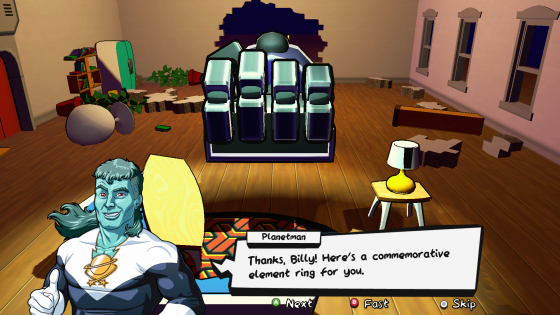 It begins well enough, and appropriately arcade-like, dashing around a colourful suburb and making deliveries while gathering time-extending pick-ups. To mix things up new mission objectives are then introduced, which soon begin to overshadow the delivery aspect entirely.

Later missions put the focus on collecting certain amounts of cash, destroying parts of the city to make way for a new complex, or crushing all opposition in the vicinity â€“ the city is currently under attack by a dubious rival pizza firm, see. Their mysterious arrival, and their eventual defeat, is the storylineâ€™s focal point.

Even these additional mission objectives soon become repetitive and it isnâ€™t long until the odds are stacked against your favour, with numerous enemy tanks and troopers on screen at once. If you havenâ€™t unlocked the shield power by this point, then youâ€™re in for a rough time â€“ the only other means of defence is a rather ineffective roll. 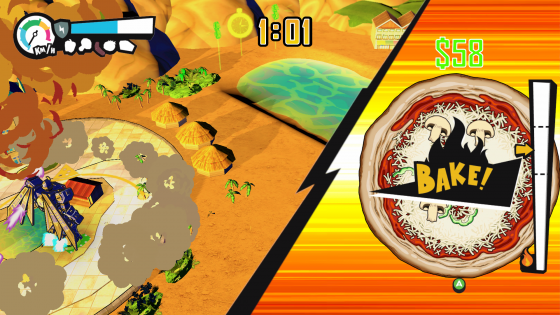 It doesnâ€™t help matters that the collision detection can occasionally be off, especially when attempting to perform an aerial ground pound. The only reprieve from repetition comes in the form of a brief and wholly forgiving mini-games for â€˜walk-in customersâ€™ which entails placing toppings, baking and slicing a pizza via well-timed button presses.

Like a pizza topped with pineapple, Pizza Titan Ultra won’t appease everybody’s palate. Our attention had waned long before the foregone conclusion was reached, discouraged by the lack of variation and a few trial-and-error difficulty spikes.

Thereâ€™s no doubting that the developerâ€™s intentions were both good and pure â€“ to create a pleasingly daft arcade-style experience, filled with stupidity to spare â€“ but the result has sadly turned out half-baked.