This futuristic racer from Shortround Games – a Brighton-based studio formed of ex-Burnout and Split/Second developers – is the latest to follow in the footsteps of OnRush, casting aside convention in order to offer something fresh and new.

1v1 races are the order of the day, entailing weaving in and out of heavy traffic at breakneck speed. The typical starting grid is replaced with a â€˜rolling startâ€™ in which itâ€™s possible to earn extra boost via a well-timed button press, and as races take place on short stretches of road, there are no â€˜lapsâ€™ to speak of either. Races last roughly a minute and theyâ€™re often incredibly close due to the way the AI behaves, with finishing times just mere split seconds apart.

The package is held together by a unique structure. Itâ€™s you versus the world in hourly online tournaments â€“ you and your rival racers have an hour to compete and rise up the ranks, with new vehicles and in-game currency available as rewards for reaching certain milestones. The sooner a tournament is entered, the better chance there is to win more races than the opposition. Once the hour is up, a short celebration for the top three players takes place, giving chance to bask in the limelight. In this day and age of colossal 50+ hour open-world racers, itâ€™s remarkably pleasing to play something that only ever wants an hour of your spare time. Precisely an hour, in fact. 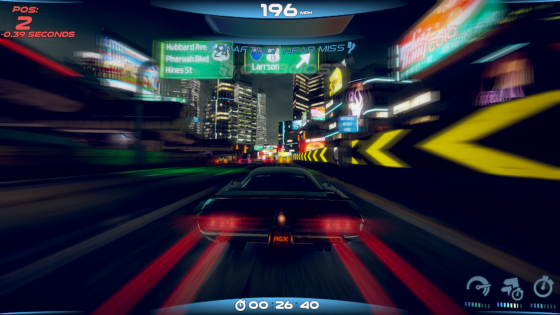 As intriguing and well-designed as RGX: Showdown is, thereâ€™s a little bit of trickery going on behind the scenes. Smoke and mirrors, if you will. Downtime between races â€“ where matchmaking takes places â€“ is brief as youâ€™re sneakily pitted against AI controlled drivers when human players are unavailable. Presumably in hope of giving the illusion of playing online, thereâ€™s no way of telling if youâ€™re up against a human opponent or the AI. Shortround obviously took this approach to make tournaments fair and frustration free, removing any chance of players â€˜rage quittingâ€™ in the process, but considering the online focus it’s still a little sneaky.

And while this does ensure that all players get an equal number of races before the hour is up, it comes with a caveat â€“ the AI quickly becomes predictable. Get off to a slow start and theyâ€™ll crash almost straight away, thus giving you a chance to catch up. Then towards the end of the race theyâ€™ll start to perform faultlessly, beatable only by having enough boost in the tank to be able to overtake. Fail to generate enough boost during the early stages of a race, or crash more than 2-3 times, then chances are youâ€™ll have to settle for second place. This routine never changes, hence why crossing the finishing line is always a blink-and-youâ€™ll-miss-it affair. 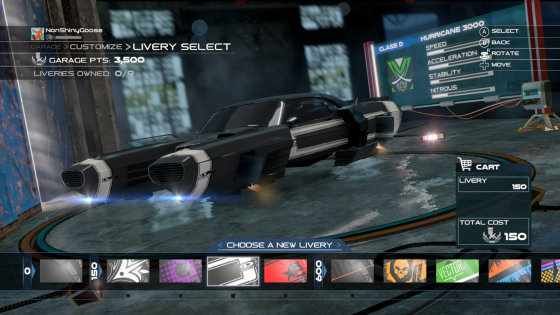 Sadly, the predictable AI isnâ€™t overcome by the track design. No matter if youâ€™re zooming through a dusty canyon or whizzing through busy city streets (every track features heavy traffic, incidentally) each and every course is formed of long straights and gentle bends, with little to no differences apart from trackside detail. If youâ€™re expecting twists, loops, gravity-defying bends and chicanes then youâ€™re in for a disappointment. The vehicles may be futuristic, but the tracks certainly arenâ€™t.

The sooner a tournament is entered, the better chance there is to win more races than the opposition

There is at least a slight tactical slant to races, in the form of single-use cards which improve handling, boost reserves, speed and acceleration. Each card costs 100 credits, and at the start of a winning streak youâ€™re presented with enough credits to buy 10 cards. However, credits arenâ€™t restored until a winning streak ends, so itâ€™s a case of spending wisely. If youâ€™re up against somebody on a five-win streak, for instance, then you may want to purchase a few cards to help even the odds.

While thereâ€™s certainly a lot to like about RGX: Showdown â€“ including the surprisingly low Â£7.99 price tag â€“ we would have liked it even more if there was a greater variety of tracks. Some subtle nuances to the driving model wouldnâ€™t have gone amiss either. Thereâ€™s nothing to replace the lack of drifting, aside from the ability to enter the oppositionâ€™s slipstream to gain boost. Indeed, not all racing conventions have been thrown out the window. 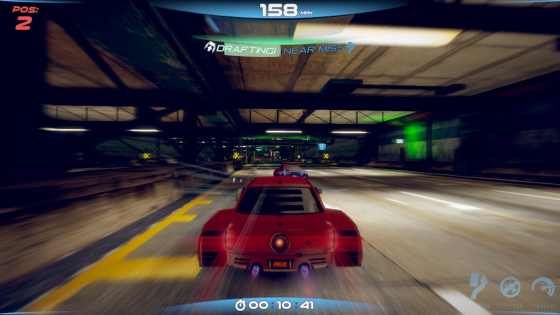 We also have a few concerns regarding the gameâ€™s future. As RGX is currently fresh and new, the userbase is reasonably healthy â€“ most hourly tournaments feature around 300 players. If Shortround fails to keep the community coming back, itâ€™s easy to imagine the player count drastically plummeting. It certainly doesnâ€™t help that publisher Telltale folded just days before RGXâ€™s release, leaving Shortround to promote and carry their own game.

Hopefully, Shortround realises the desire to climb the rankings and become no.1 will only keep players engaged for so long. Itâ€™s one hell of a hook, weâ€™ll give them that, but only time will tell if RGX: Showdown can make it in the big leagues. It has the right stuff under the hood; all thatâ€™s needed is a little extra sheen.