Influenced by such Nintendo classics as Zelda and Earthbound, indie hit Undertale has taken its sweet time making its way to Switch despite being an ideal fit for the system.

We awarded the PS4 version a stonking 9/10 roughly a year ago, and as such, weâ€™re more than pleased to see it finally reach a whole new audience. Itâ€™s as heartfelt as gaming gets.

Itâ€™s an eventful week for the Switch, in fact. Nintendoâ€™s hotly debated online service is now in full swing, bringing with it a selection of NES classics. Sadly, they arenâ€™t without fault â€“ thereâ€™s no control mapping or auto-save facilities. 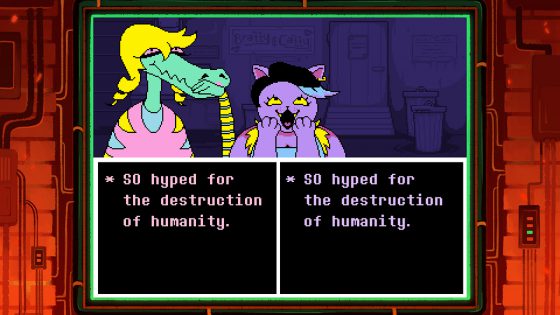 Fans of all things retro are better catered for elsewhere, with the first of SEGAâ€™s AGES titles also making an appearance â€“ Sonic the Hedgehog, which features the rule set from the often-forgotten arcade version, and the almighty Thunder Force IV.

The amusingly titled Cyber-Lip is this weekâ€™s NeoGeo release, meanwhile. Hamster has also dusted off the arcade version of Excitebike. Bad timing, sadly â€“ the original is one of the â€˜freeâ€™ online NES titles. This version does at least have a few unique features.

Then thereâ€™s the seven-game strong Capcom Beatâ€™em Bundle, featuring two titles to never see a home release. Review scores are mostly clocking in at 7/10, with online issues being the major cause for concern. 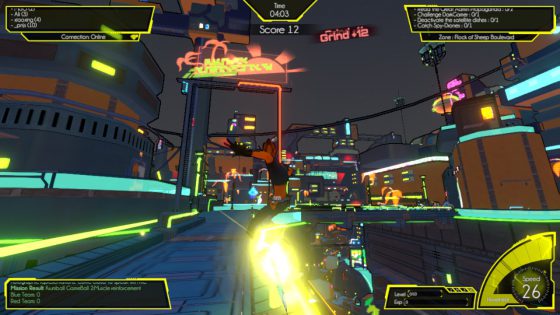 The incredibly well-received Velocity X2, Broken Sword 5 and the Reigns: Kings & Queens double pack also make the jump to Switch. As for new releases, thereâ€™s the childlike adventure The Gardens Between, the futuristic Trickstyle alike racer Hover (we all remember Trickstyle, right?), and Little Dragons CafÃ© â€“ a new venture from the creator of Harvest Moon.

The full list of new releases can be found below, along with discount highlights and new pre-orders. Thereâ€™s also a new release for New 3DS â€“ the ever-popular Minecraft!

ACA NEOGEO CYBER-LIP – Â£6.29
â€œCYBER-LIPâ€ is an action game released in 1990 by SNK. The state-of-the-art scientific army computer CYBER-LIP has suddenly gone rogue! Use a variety of items and weapons to stop the slaughter of all humanity! In two-player mode, two people can work together to take out the target.

Life Goes On – Â£9.99
Life Goes On is a comically-morbid platformer where you guide heroic knights to their demise and use the dead bodies to solve puzzles. Wanting to live forever, a mighty king sends his army of knights to find the Cup of Life.

MagiCat – Â£4.49
MagiCat takes players on a quest to retrieve a stolen artefact and explore the astounding magical worlds of the MagiCat universe. Using the powers of dashing, high jump, and fireball, along with items that can be unlocked as the story progresses, players must help MagiCat regain the worldâ€™s lost relic.

strong>Risk of Rain – Â£8.99
Risk of Rain is an action platformer with roguelike elements. With permanent death as a primary feature, players will have to play their best to get as far as possible.

SEGA AGES Sonic The Hedgehog – Â£5.99
Sonic The Hedgehog includes Mega Play, previously only available in the Sonic the Hedgehog arcade game. Familiar stages will feel new again as you race against time to the finish line. It’s a thrilling challenge for seasoned Sonic fans!

SEGA AGES Thunder Force IV – Â£5.99
The fourth instalment in the Thunder Force series from legendary game developer Technosoft! Battle against the Vios forces and fly as RYNEX in this side-scrolling shoot â€˜em up that enthralled the world with its innovative ideas, beautiful pixel graphics, and a rocking soundtrack.

Arcade Archives EXCITEBIKE – Â£6.29
â€œEXCITEBIKEâ€ is a motorcycle racing game released by Nintendo in 1984. In addition to solo qualifying races, there are final races where you face off against motocross riders. Each course has its own variety of obstacles. Use all your techniques to avoid the obstacles as you aim for first place.

Broken Sword 5 – the Serpent’s Curse – Â£24.99
Paris in the spring. Shots ring out from a gallery. A robbery… a murder… and the beginning of another epic Broken Sword adventure. From multi-award winning Revolution comes the latest mystery in this much loved adventure-puzzle series.

My Brother Rabbit – Â£13.49
My Brother Rabbit is a beautifully drawn adventure set in a surreal world that mixes reality with a childâ€™s imagination. A young girl faces a terrible reality when she falls ill. The little girl and her brother use the power of imagination to escape the hostile outside world.

Light Fingers – Â£TBC
Played on a magical clockworks game board, this turn-based multiplayer game* has real-time action and devious opportunities for misdirection, all in the pursuit of securing more loot than your opponents.

THE Card: Poker, Texas hold ’em, Blackjack and Page One – Â£4.49
Built-in ranking system! Compete with users across the country over the coins earned in a game.

Hover – Â£22.49
Experience the thrills of a fast-paced single and multiplayer Parkour game. Join the Rebellion and deride the security forces of an anti-leisure tyranny. Rise up to the many challenges of a futuristic Open World. Assemble your team, enhance your gear and perform incredible tricks and combos.

Siegecraft Commander – Â£17.99
Play through the Knight campaign as you battle against the tribal Lizardmen or enjoy the groundbreaking PvP combat system that will deliver fast-paced real-time strategy action or tactical turn-based gameplay. Multiplayer allows either game mode, while single-player focuses entirely on real-time strategic gameplay.

Scribblenauts Mega Pack – Â£24.99
Scribblenauts Unlimited – Journey into Maxwell and Lily’s world as you use the power of your imagination to solve exciting puzzles in endless ways. Discover the story of Maxwell’s 41 siblings and create unique objects of your own to share online with your friends!

Scribblenauts Unmasked: A DC Comics Adventure – Challenge your wits in an epic adventure against earth’s mightiest villains! Invent your own alter ego with the Hero Creator. Join your favorite DC Comics super heroes to explore iconic all-new locations like TITANS TOWER & BELLE REVE and restore order to the universe.

CAPCOM BEAT ‘EM UP BUNDLE – Â£15.99
Games included: Final Fight, Captain Commando, The King of Dragons, Knights of the Round and Warriors of Fate, as well as two games that were previously unavailable on consoles: Armored Warriors and Battle Circuit!

UNDERTALE – Â£11.99
Fall into the underworld and explore a hilarious and heartwarming world full of dangerous monsters. Date a skeleton, dance with a robot, cook with a fishwoman…or destroy everyone where they stand. The future is yours to determine!

Legendary Fishing – Â£24.99
Experience the thrill of catching over 20 different types of fish, from King Salmon to Largemouth Bass, in this legendary fishing experience. Includes unlockable gear, missions, multiple destinations, and hours of fun solo or with friends and family.

Omvorm – Â£6.99
Welcome to Omvorm! The first puzzle game from indie studio 4MB Interactive and our debut on Nintendo Switch! Omvorm is a fast-paced shape shifting puzzle game that requires quick reactions and calmness under pressure. 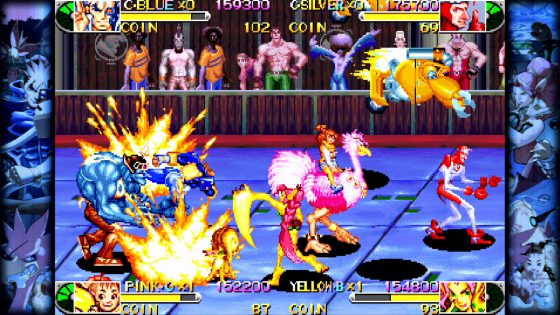 Minecraft: New Nintendo 3DS Edition – Â£19.99
Explore randomly-generated worlds and build amazing things from the simplest of homes to the grandest of castles. Play in Creative Mode with unlimited resources or mine deep into the world in survival mode, crafting weapons and armour to fend off the dangerous mobs.