The opening to this puzzle/platformer involves more than simply becoming acquainted with the lead character and learning the controls â€“ thereâ€™s also a warped sense of puzzle solving logic to get your head around. Or to be more exact, the first hour or so is best spent trying to get inside the headspace of developer Zoink Games.

Hereâ€™s a game thatâ€™ll have you inflating a whale with a trombone, scaring a nervous fireman to death by recreating a horror movie scene, and resurrecting a zombie alpaca so that it can spit at a human one last time. There are numerous equally daft quests and missions leading up to these unlikely situations too. Youâ€™ll find no dull â€˜block shovingâ€™ puzzles here. Hurrah!

You play as Penny, a spritely teenager who accidentally becomes a temporary stand-in for the Grim Reaper. Heâ€™s about to take an overdue vacation to the moon â€“ the closest place to Earth where nobody has ever died. Perks of the job include a handful of God-like powers, such as being able to switch between the afterlife and the living world, and the ability to possess the bodies of the living while telepathically reading their minds. Those who played â€˜Stick it to the Manâ€™ â€“ one of Zoinkâ€™s previous games – will notice some welcome similarities. 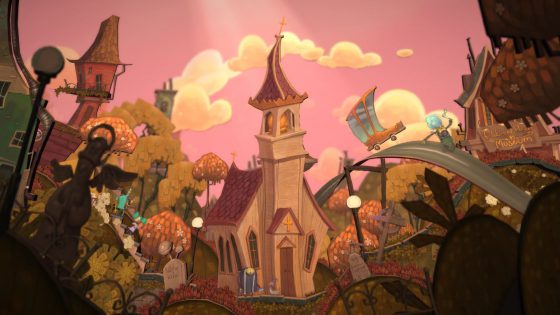 Before the dead can leave the afterlife for pastures new, unfinished business in the living world must be wrapped up first. This is where Penny comes in. The afterlife is a mirrored version of the living world â€“ the hills now have eyes (literally), vehicles are brains and other foul things on wheels, and the shops and houses are transformed into gormless looking beasts. Itâ€™s here that Penny can possess the living by finding their silhouettes, and once possessed itâ€™s then possible to use whatever item they’re carrying at the time â€“ an integral part of puzzle solving.

Thereâ€™s also an area in the afterlife where mischievous creatures can be transported from one realm to another, usually requiring some good old platforming skills.

Most missions are set in the same town, only with new areas and additional characters added as things progress. Thereâ€™s a list of objectives to work through, usually in an order of your choosing, plus a handful of optional quests with cryptic clues. Possessing the right people and using their skills accordingly sets things in motion for a finale thatâ€™ll finally set an individual free from the afterlife. 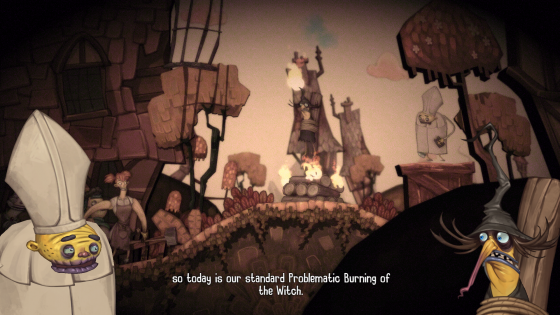 The first couple of stages are a little perplexing due to the warped sense of logic, and we occasionally found ourselves possessing everybody in sight while running from one side of town to the other, hoping to accidentally stumble on a solution to the task at hand.

Eventually, things â€˜clickedâ€™ into place â€“ the use of reoccurring characters means some skills are called upon throughout the adventure. A troublesome tyke with newly fitted braces can bite and chew things, the trombone player can blow objects over with strong gusts of wind, and the aptly named â€œsuperâ€ hero Poke-Man can prod everything in reach. These are just some of the more â€˜normalâ€™ citizens, would you believe.

It also helps that Zoink has implemented numerous features to prevent frustration, the fact that itâ€™s impossible to die or fail a mission notwithstanding. Thereâ€™s a hint system that provides a visual clue of what to do next, which proved invaluable on a few occasions. Itâ€™s also possible to teleport around the afterlife, preventing backtracking and aimless wandering, while in the living world there are taxis to jump in to help Penny get around. 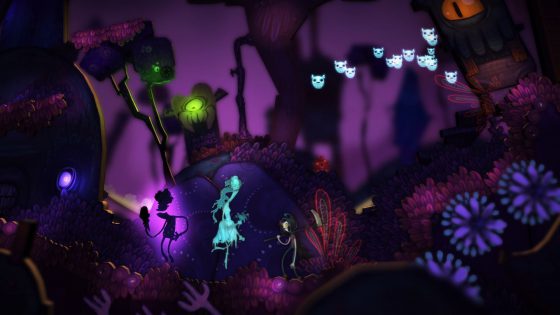 On top of all this, if you read somebodyâ€™s mind you may get another clue as to where to head next. Once you learn to take in all the pointers provided, progression becomes far easier.

In terms of presentation, Flipping Death impresses. Itâ€™s the developerâ€™s finest work yet, with lovingly drawn artwork and a wide supporting cast. The paper-thin characters stretch and bend in an amusing fashion, and the game world has a pleasing â€˜ramshackleâ€™ feel to it with bendy, gravity-defying, roads and a rickety old elevator system used to get around. All conversations are fully voiced too, and although a few puns fall flat due to being shoehorned in, the dialogue is almost constantly humorous.

Flipping Death is, unquestionably, one of the weirdest games youâ€™ll play this year â€“ a thoroughly warped experience thatâ€™s both fun and imaginative. Itâ€™s an easy recommendation for those who spend their evenings watching adult cartoons, or simply prefer their adventures to be as far removed from reality as humanly possible.