The local Chinese cash and carry gives off an aroma so fragrant that itâ€™s hard to resist popping in. Not that any extra encouragement is needed â€“ Iâ€™m always hopeful of finding some form of videogame-related foodstuff. Various Hello Kitty confectionary is as much as Iâ€™ve discovered so far, which almost certainly doesnâ€™t count. 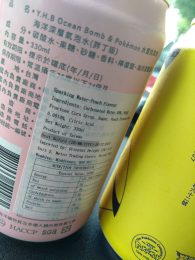 This week saw a change in luck. Nestled amongst cans of strawberry Fanta and import Mountain Dew were Taiwanese PokÃ©mon-branded â€˜Ocean Bombâ€™ soft drinks in peach and â€œciderâ€ flavour.

Initially, I thought the manufacturers were playing the old-fashioned gender card â€“ Jigglypuff soda in a pink can for the ladies, and Pikachu soda in a yellow can for the gents. Turns out I foolishly jumped the gun â€“ a quick Google search reveals a wide assortment of flavours and characters, including orange (Charmander), pear (Squirtle), apple (Bulbasaur), grape (Snorlax), strawberry (MewTwo), and cucumber (Pikachu again). We can only imagine what flavour Mr. Mime would represent.

Despite the high sugar content, theyâ€™re far from tasting like cheap kidâ€™s drinks. In fact, theyâ€™re rather pleasant â€“ the water tastes crisp due to being only lightly carbonated, and while the flavouring is sweet it isnâ€™t overpowering. Almost delicate, even.

Those expecting the cider flavour to be akin to apple are in for a surprise, hence the use of quotation marks a few paragraphs ago. Japanese cider is remarkably different from the likes of Strongbow, Woodpecker, et al, tasting more like weak lemonade. Itâ€™s refreshing but it doesnâ€™t quite hit that sweet spot. It would probably fare better with a slice of lemon. 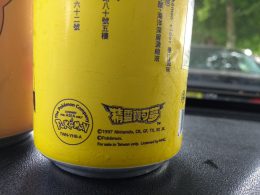 At Â£1.40 a can, I was relieved to discover these arenâ€™t the Taiwanese equivalent of Panda Pops. Not quite a â€˜top tippleâ€™ but pleasant enough. I may even try and re-purpose the cans. Thanks to their strikingly bold colours theyâ€™re too eye-catching to throw away. The Pikachu can, in particular, really stood out, visible from at least ten feet away from the cash and carryâ€™s chiller cabinet.

Letâ€™s us spare a thought for anybody who accidentally buys the cucumber soda. Maybe that should be Mr. Mimeâ€™s flavour? Weird to the point that it has no right to exist.