While we enjoyed Holosparkâ€™s Earthfall â€“ a homage to Left 4 Dead, only with gangly grey aliens instead of festering undead humans â€“ we did feel that it was a little light on content.

Cast aside fears of premium-priced DLC being used to fill in the gaps, as all upcoming add-ons will be free. The roadmap was officially confirmed today, revealing the largest of the first three DLC packs will drop in October. Itâ€™ll include a fortification-based horde mode, and updates to â€˜player progressionâ€™ allowing for outfits, new weapons and new abilities to be unlocked. 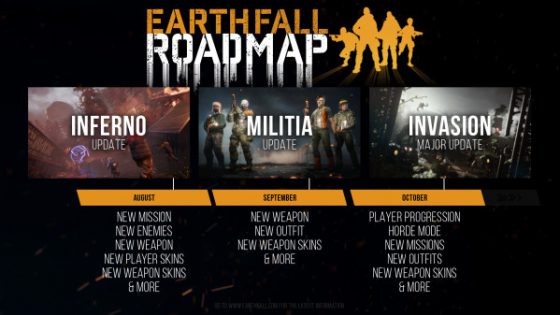 Two smaller DLC packs also launch later this month and in September, with next monthâ€™s pack including new levels, enemies, weapons and skins. As for this monthâ€™s update, expect a new level â€“ Inferno â€“ and two new fire-spewing enemies.

Games that provide an ongoing service are far more pleasurable to play when all DLC is free, keeping the playing field level by ensuring no players are left before. It also helps to keep player counts high, which is something Earthfall seems to be struggling with since launch â€“ we get the impression it hasnâ€™t found either its feet or its audience yet.