Itâ€™s funny how one small feature can give a game an identity. What makes Bloodstained: Curse of the Moon feel like a Castlevania game of yore isn’t the long-reaching whip attack, or the items nonsensically hidden inside floating candles, but rather the fiddly to navigate staircases.

They were a nuisance in Castlevania â€“ requiring diagonal input â€“ and theyâ€™re just as bothersome here. But do you know what? Without them, this wouldnâ€™t be a 100% authentic Castlevania experience.

Pleasingly, Curse of the Moon is less of a shameless clone and more of a homage, featuring enough fresh ideas to allow it to stand on its own two feet. There are plenty of similarities, of course, and as you can doubtlessly tell by the screenshots it nails the 8-bit aesthetic perfectly. 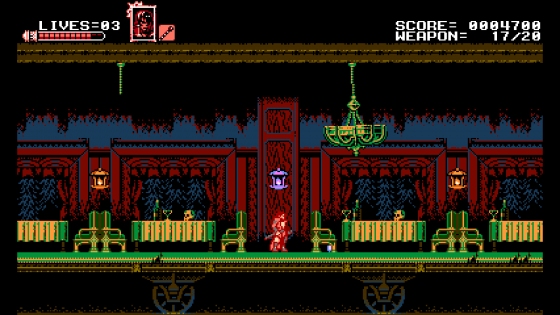 The sprites are well-drawn, and even though the animation is far from flamboyant, every character has been crafted with personality. The surprisingly creative bosses are an undeniable highlight, being an assortment of big, bold, and fast-moving creatures that would have caused the humble NES to grind to a halt.

Taking around 2-3 hours to complete, the adventure is spread across eight stages â€“ four leading to the main villainâ€™s harrowing abode, and four set within its bloodstained walls. The difficulty level is perfectly pitched, with the opening stages relatively easy going and the final two requiring acute timing, careful resource management, and precision platforming skills.

Those not weaned on the original Castlevania games shouldnâ€™t worry as â€˜casual modeâ€™ lives up to its name, granting infinite lives and featuring sensible checkpoint placing. Even the bosses can be beaten after just two or three attempts on casual difficulty, providing youâ€™ve hoarded a supply of secondary-weapons. They really pack a punch. 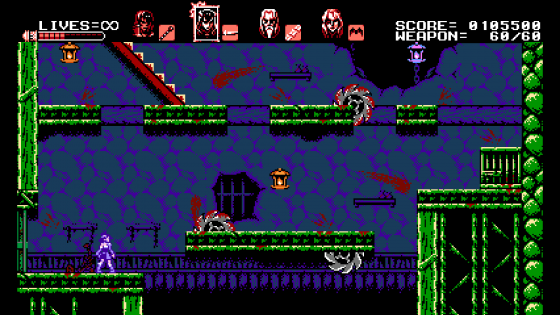 During the first four stages additional playable characters are introduced, each with their own skills and weapons; both primary and secondary. The starting character is the good all-rounder, and you may be surprised to learn they take a sword â€“ as opposed to a whip â€“ into battle. Itâ€™s the female lead that favours the whip, also able to slide into gaps and jump high. An elderly gent has the smallest health bar of all but the strongest magic, including an invaluable magical shield.

This leaves us with a red-eyed creature of the night, able to transform into a bat. Again, this skill proves invaluable â€“ with enough magic power itâ€™s entirely possible to fly past enemies and avoid tricky platforming sections.

Characters can be swapped between via a push of a button. Rather than share one health bar they each have their own gauge. If one character dies while under your control youâ€™re thrown back to the last checkpoint – a process that repeats until youâ€™re reduced to a party of one. You soon learn to save the more adapt characters for certain situations, and itâ€™s also a good idea to swap characters and collect surplus health to keep all four gauges topped up. 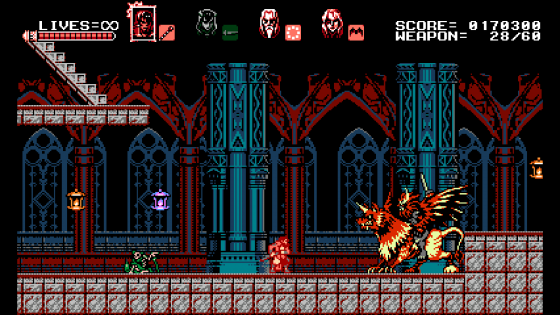 While the levels are short â€“ those expecting a single, sprawling, environment may be disappointed â€“ theyâ€™re well designed, housing secret areas, locations that require certain skills to reach, and various routes to take.

Thankfully, developers Inti Creates have resisted from turning each stage into a colossal labyrinth. Sometimes it appears a certain character is required to progress, but if you head to the next screen or down the nearest staircase, youâ€™ll always find an alternative route. In fact, weâ€™re pleased to report we didnâ€™t have to resort to backtracking once.

Conceived as a mere stretch goal for the upcoming Bloodstained: Ritual of the Night, Curse of the Moon is one of those rare games that exceeds all expectations. What could have easily been a throwaway experience knocked out on the cheap with little care and effort has turned out to be the complete opposite; a smartly presented and meticulously put together experience, with tight controls and a memorable musical score. Once you take the additional difficulty modes and replay value into account, it proves to be quite a substantial package too.

Consider the bar for Ritual of the Night well and truly set. Talk about a tough act to follow.