Itâ€™s not often game journos unanimously agree on something. The original State of Decay â€“ which highlighted MSâ€™ 2013 Summer of Arcade promotion – was a rare exception, becoming the very definition of a diamond in the rough. By putting the focus on establishing a friendly community it was unlike most zombie games, and for a mere XBLA release, it was beyond ambitious. It was, however, let down by a few shortcomings such as irksome glitches and a general lack of polish.

A longer development cycle, a bigger budget, and an upgraded game engine (the original used CryEngine3, whereas this sequel opts for the ever-popular Unreal Engine) should have resulted in State of Decay 2 fully achieving Undead Labâ€™s vision. But rather than feeling fresh but familiar, itâ€™sâ€¦astonishingly familiar. From the sights and sounds to the rural county setting, it felt like I was simply playing through the remastered State of Decay: Year One Edition again.

Cast aside all expectations of bigger locations, larger waves of zombies, and a livelier open-world. Weâ€™re back to pootling around the American countryside, stopping in quaint villages to ransack pharmacies, diners, gas stations and summer houses for goods. The festering undead rarely attack in great numbers (oddly, a group of just three or four zombies is classed as a horde) and the amount of â€˜special undeadâ€™ can be counted on one hand. 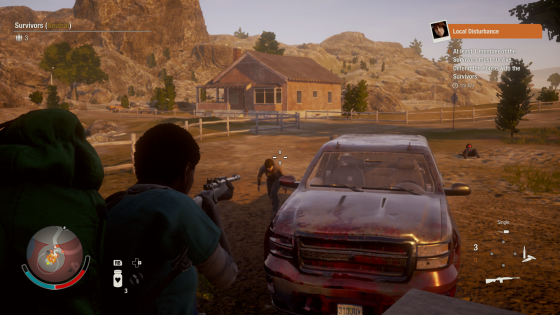 Itâ€™s so uncannily similar to the original that despite the new engine it still suffers from similar bugs and glitches, such as vanishing AI teammates and wonky vehicle physics. Combat is a bit crunchier this time around though, with a larger array of melee weapons, and new grisly â€˜final blowâ€™ moves. If only you werenâ€™t reminded how to perform certain actions every few minutes. Itâ€™s as if the Microsoft paperclip has come back from the dead.

In terms of structure, State of Decay 2 is a game of two halves. The first 5-6 hours are spent improving your homestead with additional facilities, finding new recruits, and painstakingly gathering resources including food, medicine, fuel, materials, and ammo. These vitals are logically located. Low on ammo? Head to the nearest gun shop. Need food? Time to take a trip to the local diner. And if you really get stuck, a shout out on the radio will highlight potential stashes on the map.

One thing baffled us though: surely Undead Labs could have implemented a more interesting way to gather goods than simply holding down the â€˜Yâ€™ button for a few seconds? A mini-game, a spot of button bashing or stick rotating, a QTE â€“ anything would have been an improvement. While you can speed up the process, at the risk of making more noise, looting abandoned abodes quickly becomes an arduous task. 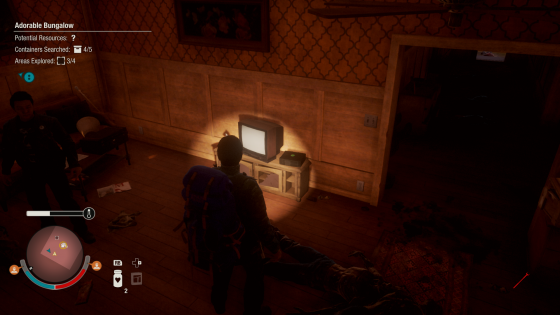 At least you donâ€™t have to take the same recruits along for the ride. Community members have different personalities and can be swapped between, with the idea being to let them rest up and heal before heading out. Each has different skill sets which become improved over time, eventually unlocking further unique skills. Killing zombies, wiping out infestations, selling goods to other traders and being an all-around good neighbour increases both a characterâ€™s standing and influence, meanwhile. Once a certain standing has been obtained, itâ€™s then possible to promote a citizen to a leader.

After doing so, the game unofficially enters its second half, putting the focus on destroying 10 plague hearts spread across the county. These grotesque abominations have caused plague zombies to appear â€“ take too much damage from these crimson-hued creatures and youâ€™ll end up riddled with plague, requiring an antidote and a few hours off duty to recover from. Like before, all character deaths are permanent, and the loss of a valued member can drastically reduce morale.

Itâ€™s during this second half that things really take a tumble. A nosedive, in fact. The first half is obviously based around self-improvement and establishing a community; good wholesome stuff. The second half? A tedious task of killing time. The aforementioned plague hearts only appear on the map after making a radio request, and after each request the â€˜cooldownâ€™ timer is extended by around 10 minutes, eventually prompting a 45min wait to find the final heart. 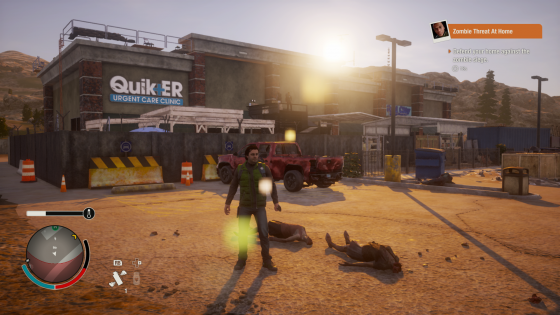 By this point, weâ€™d established a second larger base in a strip mall and gathered so many resources that our ragtag group was feeling nothing less than empowered. All that was left to do was to take on the optional, randomly generated, side-quests. The algorithms for these are beyond basic. To elaborate, every 30 minutes â€“ without fail â€“ an NPC would appear in the summer house opposite our homestead and ask for a hand finding their cherished baseball bat in the shed outside.

So, what began as a reasonably engaging experience â€“ State of Decay 2â€™s forte is always making sure thereâ€™s a task or two to clear off the checklist â€“ ended up with us simply driving around the countryside until the next plague heart was ready to reveal itself.

It should be noted that taking on a heart is a slightly tricky task, as over time the infestations grow stronger. Thankfully, itâ€™s now possible to play online, either helping a fellow survivor or requesting back up from random players. Loot is shared out evenly, and itâ€™s possible to perform emotes and such. Online play isnâ€™t the gameâ€™s saving grace, however â€“ itâ€™s just another feature implemented in a perfunctory fashion. 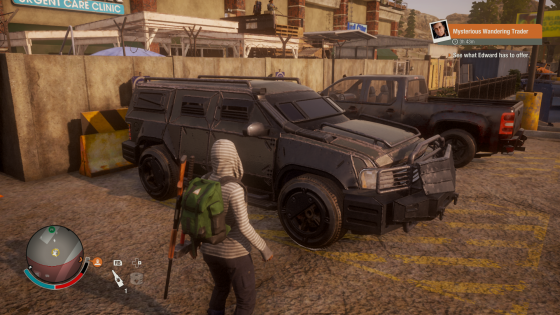 While killing time we even found ourselves questioning what gamers expect from a sequel. State of Decay 2 offers more of the same, except with a few new features. Maybe for some thatâ€™s enough, especially given the Â£25 asking price. Maybe fans of the original never expected another more than a better-looking game with online co-op. If you fall into either camp, you will find solace hereâ€¦providing youâ€™re able to contend with the occasional glitch. Those wanting a bigger, better, and more thrilling experience will almost certainly feel disappointed.

The first State of Decay was, without doubt, a diamond in the rough. Now that diamond has lost its shine, not so much revealing a lump of coal, but something that definitely no longer sparkles.