Often edging on the side of experimental, STAY is a tricky game to explain. After being forcibly abducted from his home during the early hours of the morning, the mild-mannered Quinn finds himself trapped inside a dark and filthy room. An old computer is the only thing nearby that still works, and so Quinn â€“ still dressed in his PJs â€“ logs into a seemingly random chat room in hope of finding somebody online willing to help make sense of the situation.

It so happens youâ€™re the first person to respond to his plea. Effectively, then, youâ€™re playing the role of yourself in STAY â€“ Quinn may be the protagonist, but he isnâ€™t under your direct control, merely seeking your guidance, encouragement, and reassurance to escape from the torturous hellhole. Every minute or two youâ€™re prompted for a multiple-choice response or forced to decide what to do next. Responses often impact Quinnâ€™s mood, diffusing stressful situations or inadvertently making things far worse than they are.

Roughly 80% of the gameâ€™s duration is spent in the faux chat room â€“ complete with a pixel art webcam â€“ reading Quinnâ€™s text-heavy descriptions of both his surroundings and his current mental state. While Quinn is intelligent and well-informed, heâ€™s no superhero. Itâ€™s clear from the outset that he carries some emotional baggage with stress, anxiety and depression being reoccurring themes. 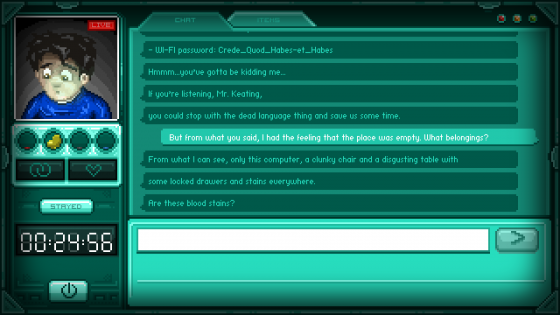 Fearing for his life and sanity, he attempts to pick apart his kidnapperâ€™s mindset in a vague hope of finding answers, all while searching for an exit in whichever room heâ€™s currently exploring. You can also choose to learn more about his life or spur him onwards to find access to another room.

a record of time spent away from Quinn is kept

Ingeniously, a record of time spent away from Quinn is kept. At around 4-5 hours, itâ€™s possible to complete STAY in one run, never leaving his side. Dipping in and out sees things pan out slightly differently, with Quinn passing judgement on your absence.

It may sound fascinating â€“ and at first, it genuinely is â€“ but STAY soon emerges to be little more than a glorified â€˜80s microcomputer text adventure, albeit with a handful of arbitrary puzzles thrown in.

Despite being trapped in a filthy abode – filled with antiques and oddities – Quinn can be surprisingly chipper at times, making jokes as well as throwing pop culture references into the mix. He makes a few typos â€“ which heâ€™s quick to correct â€“ too. It isnâ€™t enough to completely convince us that Quinn is a genuine person, however, as some dialogue is nothing short of cringe-worthy. One example: heâ€™s in constant danger, yet happy to describe the current room temperature as being â€œcolder than a witchâ€™s titâ€. 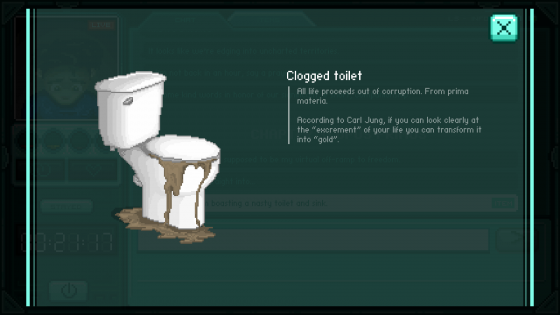 Locations change every few chapters, which last between 10-15 minutes each, thus giving new surroundings to investigate. By getting him to search high and low, a useful object may be discovered. This often leads to a puzzle-based mini-game, which include minor variations of Minesweeper, Mastermind, and chess.

The first puzzle is so simple that it can barely be considered as such, done and dusted in just a few seconds. But instead of becoming increasingly challenging, the puzzles only become more obtuse as things progress. There are no hints, explanations or even control diagrams; youâ€™re left to figure everything out for yourself, which would be perfectly acceptable if it wasnâ€™t for the inconsistent control schemes. In one puzzle the left analogue stick is used to move objects, while in another the right stick is used.

A quest to escape a fun fair-style mirror maze proved incredibly frustrating, as there are no clues or visual hints whatsoever â€“ every screen looks the same. We swore blind that we were going around in circles for a good five minutes, prompting us to quit and start over. We hit a similar difficulty hitch much later. As the story progresses, your decisions become even more critical as an incorrect choice can lead Quinn to an early grave. We asked Quinn to place some tools back in their appropriate places on the wall, expecting a secret button or similar to trigger, only for a hammer to randomly fall from a high shelf and land a fatal blow on Quinnâ€™s head. An instant, and wholly undeserved, game over.

The penultimate chapter really left a sour taste. It forces you to complete the most laborious and unimaginative puzzle the game has to offer before presenting a series of multiple choice questions. Pick an incorrect answer and youâ€™re thrown back to the start of the chapter, meaning the puzzle must be beaten once again. This poor checkpoint placing really put a downer on the experience, although to be fair, our time with Quinn was starting to drag before this. It doesnâ€™t help that just a couple music of tracks play feature, quickly becoming monotonous.

We soldiered on until the end, wanting to see Quinnâ€™s sordid story through to its conclusion. Initial intrigue and suspense ended up being replaced with frustration; as mentioned in the opening paragraph, this is an experience that feels undecidedly experimental.

Itâ€™s still a unique enough proposition for those seeking something a little different, but ultimately, we approved of the concept more than the execution.