It dawned on us recently that todayâ€™s youth are probably unaware of how big Jurassic Park was upon release. It was more than just a summer blockbuster; it was a cultural phenomenon, ushering in waves of merchandise and single-handedly kick-starting the â€˜90s dinosaur bandwagon. 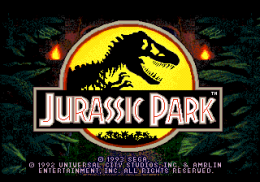 Shops were filled with dinosaur related goods, and the filmâ€™s buzz lasted long after the movie left cinemas. The special effects, in particular, set a new benchmark. The PSone, Saturn and Ultra 64 (as it was then known) were on the horizon and it was often stated that the next batch of consoles would be able to offer Jurassic Park quality visuals. Although the PSone did come packed with a reasonably impressive dinosaur tech demo, we can chalk this up to the unwavering excitement of the â€˜90s gaming press.

The Jurassic Park video games were likewise hyped as the second coming, taking the cover of just about every magazine at the time. Unsurprising, given that every format going received a JP tie-in. Ocean handled the Amiga, PC and Nintendo versions while SEGA both developed and published their iterations internally. Ocean opted for a top-down adventure/shooter hybrid that also featured some ambitious indoor first-person shooting sections. Although the lack of a save facility in the SNES version did lead to frustration, reviews were mostly positive. 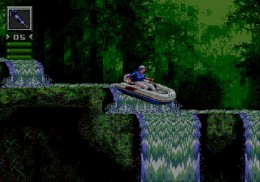 The Master System and Game Gear JP games, on the other hand, were painfully generic, and so it’s fair to say SEGA focused their attention on the Mega Drive and Mega CD tie-ins. The Mega Drive hosted a 2D platformer with digitised sprites, in which it was possible to play as either a human or a velociraptor. The Mega CD version meanwhile was a slow-paced point ‘n’ click adventure with a degree of educational value due to the vast amount of dinosaur trivia. SEGA had apparently pumped a ridiculous amount of money into it, presumably intending it to become a much needed Mega CD system seller.

So lucrative was the JP license that both Ocean and SEGA squeezed additional worth out of it while waiting for 1997 sequel The Lost World. Jurassic Park 2: The Chaos Continues was a run and gunner released on SNES and Game Boy in time for Christmas 1994, where it joined Jurassic Park: Rampage Edition on Mega Drive. This one did away with the dark and moody visuals SEGAâ€™s first game featured in favour of a bright and colourful comic book vibe. Both were panned as being blatant cash-ins and as such, neither is particularly well remembered.

Itâ€™s also worth noting that the 3DO had its own JP game, and an incredibly weird one at that – it was a half-baked mini-game collection mostly comprising of Space Invaders and Asteroids clones. The majority of the budget must have been blown on the license. 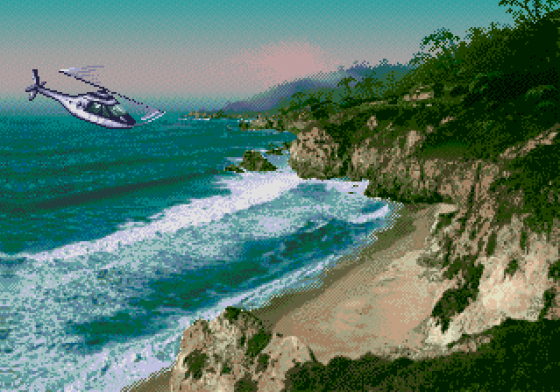 By the time The Lost World arrived in cinemas, it was clear the Saturn had no chance of catching up with the PSoneâ€™s sales. The Saturn’s Lost World tie-in from 1997 – a shoddy 2.5D platformer – can actually be considered a late release for the system as support came to a halt the following year.

So what does this make the Mega Drive and Game Gear tie-ins of The Lost World? They came as a surprise, certainly, as both systems had been written off as dead long ago. The US-only Game Gear rendition of Jurassic Park: The Lost World takes the accolade of being the final release for the handheld. In fact, it was the only Game Gear game to be released that year. If it wasnâ€™t for FIFA 98: Road to World Cup, the 16-bit version would have been the final Mega Drive game too. In this present era, it would be akin to a publisher releasing a reasonably big-budget JP game on Wii U. 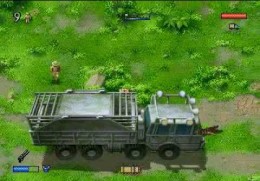 Although it was pipped to the final post by FIFA 98, both games were the last SEGA ever committed to silicon. Firing up the cartridge manufacturing line for one last run must have been somewhat poignant, like a printing press about to rattle off the last issue of a publication. Or perhaps factory workers found it simply baffling. Itâ€™s impossible to say, but it does show how lucrative the license was for SEGA to believe they could make one last buck out two long departed formats.

The Mega Drive tie-in was handled by Appaloosa, of Ecco the Dolphin and Kolibri (â€œarguably the best hummingbird based-shooter available for the 32X”) fame. Inspiration seemingly came from Oceanâ€™s original JP game, as it took the form of a top-down shooter with puzzle elements. In addition to vehicle-based driving sections, it also featured a two-player co-operative mode. Like Ecco before it, it was no slouch visually – Appaloosa managed to squeeze out some smoothly rendered graphics and detailed backdrops. The long-running GameInformer magazine made the bold claim that they preferred it to the rushed out PSone/Saturn tie-ins. They even hoped SEGA had more Genesis games in the pipeline, which strikes us as incredibly wishful thinking. 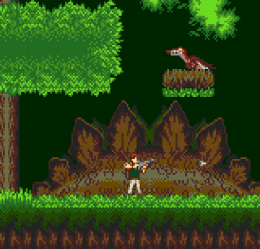 Unsurprisingly, the Game Gear version was a 2D platformer. It was developed by Aspect, the Japanese studio that had pretty much kept the Game Gear afloat for its entire life. Not only were they responsible for the bulk of 8-bit Sonic titles, but also some of the most celebrated Disney tie-ins such as Land of Illusion Starring Mickey Mouse and Deep Duck Trouble Starring Donald Duck. The Lost World bared all the hallmarks of an Aspect game, from the smartly drawn sprites to the tight controls.

Ultimately though it was a pretty soulless and uninspired affair, save for the ability to use tranquillised dinosaurs as makeshift platforms. That said, on a system that featured some of the worst movie tie-ins of the era – including The Last Action Hero and Cliffhanger – it can still be classed as one of the better examples.

Digging the Mega Drive and Game Gear out of their deathbeds for one more outing should be all the proof you need of how colossal Jurrasic Park was in the ’90s. Surely one of the most lucrative licenses of all-time.