Itâ€™s easy to forget how popular Donkey Kong was in the early â€˜80s. Nintendoâ€™s arcade classic spawned a marketing phenomenon, with the grinning ape appearing on everything from breakfast cereal to board games.

The colourful visuals, non-violent gameplay, memorable characters, and hard-but-fair difficulty level made Donkey Kong an arcade game like no other, notching up impressive sales. While it didnâ€™t go quite as far as to make Nintendo a household name, it certainly helped the Kyoto giant claim a foothold in the US. 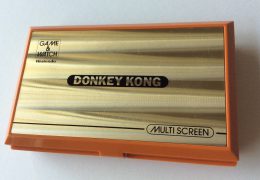 We could duly tell you that Mario made his first appearance in Donkey Kong, under the guise of Jumpman, but thatâ€™s common knowledge. Less common: the number of Game & Watch handhelds based on Donkey Kong exceeded those starring Mario. The two-player Donkey Kong Hockey even saw the popular primate cross into the sporting genre.

The original Game & Watch Donkey Kong from 1982 is often referred to as one of the best LCD handhelds of all-time. It was certainly the bestselling â€“ 1.2 million units were sold in Japan alone. Itâ€™s an amazing figure. Heck, some fully fledged â€˜80s video game systems even struggled to reach 1 million sales (although thatâ€™s perhaps a slightly unfair comparison, given price).

Another factor that plays in the popularity of this Game & Watch is that many children werenâ€™t allowed in arcades. Especially in the US, they had a reputation of being shady locations for troublesome youths to congregate. When word of mouth spread that Donkey Kong could be experienced outside of the arcade, sales boomed. 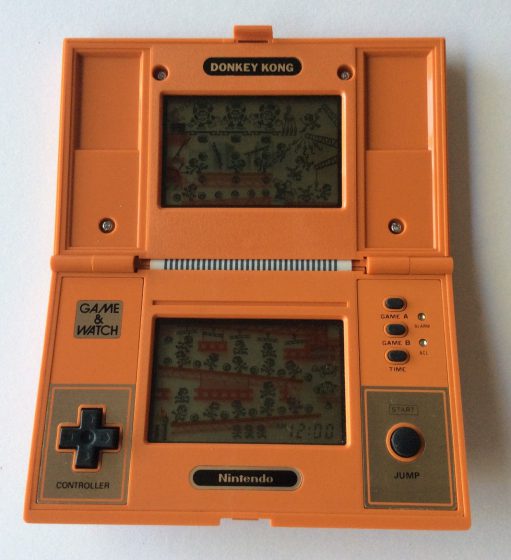 Donkey Kong wasnâ€™t the first multi-screen Game & Watch to be released (Oil Panic had that honour) but it was the first to feature a D-pad. Whereas in Oil Panic you merely had to keep an eye on the bottom screen – in order to tip a bucket of oil out of the window at the right time â€“ here, Mario started his adventure on the bottom screen and worked his way up to the top. 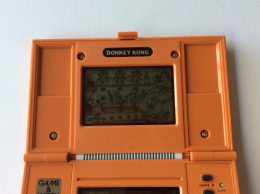 Incidentally, only in the Western version is the main character referred to as Mario. In the Japanese version, heâ€™s simply referred to as â€œthe rescuerâ€.

What makes Donkey Kong the king of the LCD jungle is that Nintendo managed to successfully implement everything that made the arcade original great. Watching the barrels Donkey Kong threw and planning your next few steps took skill and patience. Barrels didnâ€™t just roll to the end of the girders and fall onto the next, as sometimes theyâ€™d tumble down ladders too. This helped to make things pleasingly unpredictable. You could choose to play it safe, or if you were feeling lucky, try and climb the nearest ladder and hope the next barrel wouldnâ€™t follow.

The final confrontation with Donkey Kong relied on perfect timing â€“ Mario had to leap at the right moment to hitch a ride on a crane, ready to swipe one of Donkey Kongâ€™s platform supports. Once all three had been removed, the giant ape fell headfirst to the floor below with an almighty crunch. Well, almighty for LCD game standards. 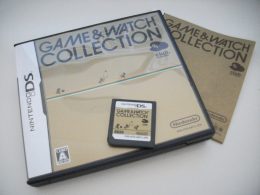 The late Gunpei Yokoi originally designed Game & Watches for bored businessmen to play while travelling to work, making them small enough to conceal within the palm of a hand. It soon transpired that it was children â€“ not adults – who wanted to play games on the go, and so later G&W systems were larger in size and the cases became more far more colourful. The Micro Vs. Series even featured two removable mini joypads, allowing friends to play together.

Weâ€™ve always felt that Nintendo missed a trick by not including Donkey Kong as a built-in extra with the Nintendo DS. As well as teaching gamers to look at two screens at once, it would have also served as a neat homage to Nintendoâ€™s first foray into dual-screen gaming.