Weâ€™ve become accustomed to simultaneous launches in this digital age. If not simultaneous, then at least within a month of launching in other regions, should there be a last-minute hiccup or similar.

Super Night Ridersâ€™ story is a little different. Some two years after hitting Xbox One in America, the arcade racer has finally found its way to Europe. The reason for the delay isnâ€™t clear, but one cause could be down to Microsoft exercising quality control. Reviews across the pond werenâ€™t too kind, resulting in a sloppy 36% Metacritic. Ouch!

Whatever the reason, a two-year delay is largely unheard of nowadays.

Many indie games are influenced by retro classics, but few are quite as brazen about it as Super Night Riders â€“ as soon as a race starts, the words â€˜Hang On!â€ dash across the screen. What we have here, then, is a straightforward checkpoint racer with courses taking approx. 3 minutes to beat. 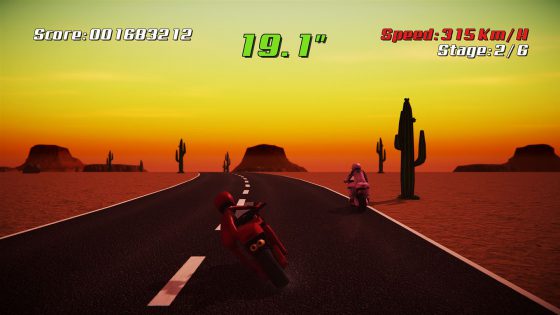 Time limits are tight, with checkpoints just 30 seconds apart. Thereâ€™s very little leeway for error – itâ€™s possible to hit one, maybe two, rivals and still win but any more than that is pushing your luck.

Bike handling is fittingly arcade-like. Bikes get up to full speed in a blink of an eye and drifting across the tarmac to avoid traffic is an effortless task, requiring just a jab of the accelerator.

Backgrounds change from one checkpoint to the next, including cityscapes and dusty deserts, but there isnâ€™t much variety in trackside detail. Itâ€™s also possible to race in one location, with each â€œlapâ€ set during a different time of day. While everything shifts at a fair old lick, visually itâ€™s extremely basic â€“ bikers and their bikes lack any texture or detail whatsoever. Sadly, this doesnâ€™t lend Super Night Riders a retro feel. It just looks incredibly, if not ridiculously, cheap. 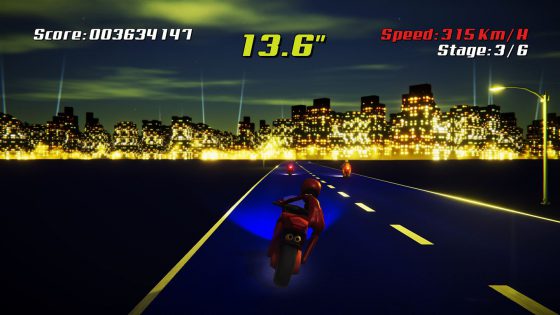 Does it deserve the critical mauling it received back in 2016? Yes and no. Although simplistic, itâ€™s still mildly challenging â€“ thereâ€™s certainly a difficulty curve present, and itâ€™s one that isnâ€™t too unforgiving. And while it doesnâ€™t nail the look of a retro racer, it does feel like one. In other words, the developers partly achieved their goal of giving the world a new retro racer.

Weâ€™ve always seen Hang On as one of those underwhelming early Mega Drive releases that were quickly forgotten once bigger and better games hit the scene. In fact, it wasnâ€™t until it graced the cover of Retro Gamer that we discovered it does have its fans.

If you can count yourself as one, youâ€™ll almost certainly find solace here. Itâ€™s a simple game that reminds us of simpler times.