SEGA surprised everyone a couple of weeks ago by announcing that Football Manager was not only coming to the Switch but that it was available immediately.

It seems a slightly odd time to launch as the season is almost over. That said, if you support a team that’s performed poorly this season it does provide an opportunity to rewrite history. Maybe it’s the perfect time for Chris Coleman to sit on the sofa with a nice mug of hot cocoa and try and work out where it all went wrong.

Since this is the first console football manager since Football Manager 2014 on PlayStation Vita, some catching up is in order. This famous timesink of a game tasks you with managing a football club in one of either the top seven divisions in England or a club in one of a huge variety of foreign leagues. You can either do this by simply taking over a club of your choice, or by picking a ‘challenge’. Challenges range from saving a club from relegation to surviving a financial meltdown. 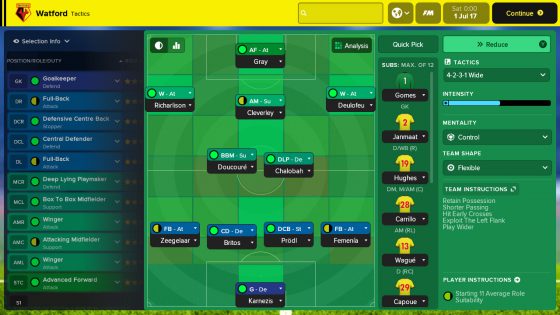 If you’ve only really ever played Championship Manager, the forerunner to this series, you might think these challenges sound easy. Anyone who played that game will have tales of taking division three clubs through three promotions and all the way to the final of the Champions League. Football Manager is significantly more difficult. We took over North Ferriby and were sacked before Christmas, but then we did grow up watching teams managed by Terry Dolan, so we’ve not had the best of role models.

While Football Manager has got tougher, it’s has grown more complex. The full PC experience can sometimes be opaque and terrifying, with a vast array of hidden variables responsible for your team’s performance. Luckily, this iteration of Football Manager is based significantly on the iPad version. That means a simplified experience, with training options cut down and media interactions completely expunged. Thank god, because the media interactions – with their canned answers – are deathly dull. Less positive news: this Switch version costs Â£10 more than on mobile. 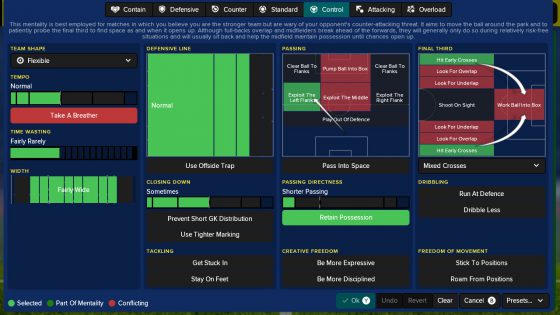 The Switch version does boast nice control features, though. The use of buttons in addition to the touchscreen is helpful and makes navigating the myriad of screens and menus a breeze (once you get used to it). This control scheme actually holds up pretty well in docked mode, too. Split Joy Cons and a mouse cursor moving with the left stick make for a friendly experience.

Our only gripe, price aside, comes with the presentation. Menus could be swifter and smoother and we’d love some kind of rumble feedback option to make it more clear the game has registered a press. We’d also like to see an improvement in the sound department. Stadium noises often sound like white noise, and the game doesn’t play music in management screens. On a laptop, where people often just queue up a playlist, this is fine; on Switch it makes the game feel lifeless. We’d also like a more in-depth tutorial, as it is the game just throws you in.

Even with these gripes,Â the clever use of the shoulder buttons to go forward and back and the portability of this port means the Switch has quickly become our go-to device for our football managing needs. We just need to find a club that easy to manage. I wonder if the Blackpool job is available.