Weâ€™ve always said UK chart purveyors Chart-Track go beyond the call of duty, compiling charts for formats barely alive. This is even though most gaming sites rarely share information on the individual format charts, focusing solely on the all-formats top 40.

While penning todayâ€™s chart run-down we were surprised to find Chart-Track continues to record the minute amount of physical Nintendo DS and PSP game sales. These two systems havenâ€™t had a new release for over four years – the last game released for the Nintendo DS was Big Hero 6 Battle in the Bay in 2014, while PES 2014 was the final PSP release. 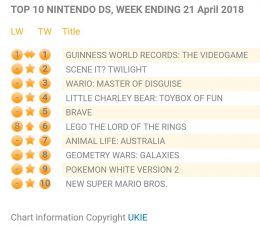 So, what games are riding the DS and PSP charts high this week? In the DS top ten, Guinness World Records: The Videogame takes the top spot â€“ a vastly overstocked title from 2010 which retailers are obviously still trying to get rid of. This is its third consecutive week at no.1.

The PSP chart meanwhile currently features just five titles, with NBA 2K10 on top. Four of the games in the chart are â€œnewâ€ entries. Tomb Raider: Legend was on top of the pile last week. The 2011 budget re-release, presumably.

How many copies does it take to top one of these charts? Weâ€™d be surprised if the amount was in double figures.

Whoâ€™s buying these games is more of a mystery. Younger gamers whoâ€™ve had a system handed down to them from an older sibling is a safe assumption. Or perhaps they’re simply being used as â€˜fillerâ€™ items to achieve free Amazon postage? Thatâ€™s also a likely, and more realistic, scenario.