The ZX Spectrum gained hundreds of weird and wonderful games during its lifetime. It was an era where developers would have a stab at turning just about anything into a video game. Low development costs also allowed creators to take risks, hoping to break into untapped markets or accidentally stumble on â€˜the next big thingâ€™.

Deep Ones is influenced by ZX Spectrum classics of yore but takes no chances â€“ itâ€™s a relatively straightforward underwater 2D platformer, with a few shooting stages and other similar deviations.

Neither does it strive for authenticity, merely resembling a ZX game in passing. The crudely animated characters are accompanied by lighting effects, sprite scaling, camera panning and other modern-day staples that the humble Speccy could never hope to achieve. The colour palette is at least akin to that of the Spectrum familyâ€™s hardware, featuring plenty of single-colour sprites daubed in garish magenta, cyan and bright yellow hues. 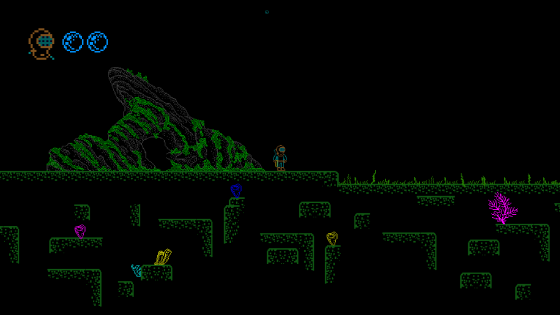 The lack of faux a Spectrum boot-up/loading screen is a huge missed opportunity for an extra dollop of nostalgia. For better or worse, depending on how cherished the vintage system is to you, thereâ€™s no colour clash either.

thereâ€™s a whiff of â€˜game jam projectâ€™ about it

As for sound, the sound effects are unquestionably from the 8-bit era while the music is far more modern, being a peculiar mixture of tranquil beats and grimy electro. In truth, we arenâ€™t best convinced the musical score was made especially for the game.

You play as a nameless scuba diver out to retrieve his submarine from the lair of an almighty sea creature â€“ a nod in the direction of H.P Lovecraft. From start to finish, not a single word of dialogue is uttered from the diver, and neither does he display any degree of personality. The lack of animation is mostly at fault here, as heâ€™s rather crudely animated. Oddly, some of the bosses have far more frames of animation than the gameâ€™s hero.

Chunky text boxes often appear during boss battles, unhelpfully obscuring the action. A rough translation job (developer BURP Games is based in Ukraine) has led to more than a few unfortunate typos. â€œPress X to Shotâ€ is one such example. The few attempts at humour also fail to hit the mark, but this is less of an issue. They did at least try. 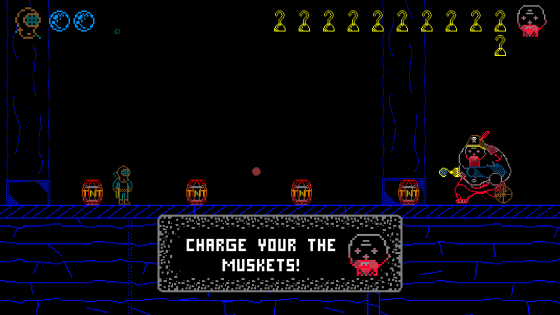 The first batch of levels entail simple platforming, giving chance to acquaint with the diverâ€™s slightly wayward jumping arc. A gun â€“ possibly a harpoon – is then introduced. The fact that it can only be fired in a single direction, and fires at a frustratingly slow rate, prevents Deep Ones from falling into â€˜run and gunâ€™ territory. The firearm canâ€™t be used while jumping, and for some unexplainable reason, itâ€™ll occasionally fire two shots at once. We also encountered instances where we swore blind we pressed â€˜jumpâ€™ in good time, only to fall into the dark abyss below.

For much of the experience, Deep Ones offers nothing new. Jump on moving platforms, avoid spinning starfish, leap off bubbles before they pop â€“ painfully generic stuff. Occasionally though, itâ€™ll throw a curveball your way. One level is non-linear in design, sending you off in different directions to find door keys.

Boss battles are creative too, featuring bullet formations that take a few attempts to memorise. Delayed controls make these battles tougher than they should be, however, causing some frustration. In one instance we had to put the controller down or face becoming irate. 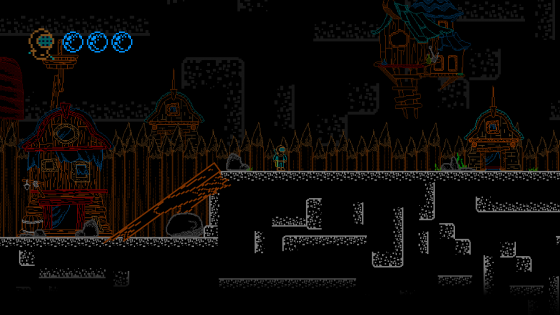 Shooting sections help to induce variety, although they fail to bring any substance â€“ everything feels rather cheap and throwaway, and we came across a few random glitches such as moving platforms temporarily vanishing and enemies becoming stuck on objects. Weâ€™d even go as far to say thereâ€™s a whiff of â€˜game jam projectâ€™ about it. If it wasnâ€™t for the decent checkpoint placing, weâ€™d say that very little playtesting took place.

Deep One’s pricing (Â£3.99) does, sadly, reflect both the gameâ€™s budget and quality. A game such as this should offer simple, throwaway fun, with a few modern-day conventions. While it does occasionally fit that bill, sloppy coding and a general air of ineptness results in an experience thatâ€™ll only be remembered for its abstract visuals, and maybe â€“ just maybe â€“ those hilarious typos.