The casual gamer market may have fizzled out over the years, but the popularity of match-three puzzlers remains strong. By associating with such brands as Marvel, Star Wars and Family Guy, as well as throwing RPG-elements into the mix, match-three puzzlers have found a way to appeal to larger audiences, while removing the stigma usually associated with the genre.

Metropolis: Lux Obscura is the latest to distance itself from Candy Crush, Farm Heroes Saga, Bejewelled and similar games mostly played by bored housewives. This is achieved not just by the noir comic book styling, but also by featuring â€˜matureâ€™ content such as violence, sex and nudity, swearing â€“ including one liberal use of the â€˜c-wordâ€™ â€“ and drug references. Itâ€™s fair to say this isnâ€™t aimed at those who purchased a Nintendo Wii solely to play Wii Sports.

The storyline is seemingly woven from snippets found on Sin Cityâ€™s cutting room floor. Jon Lockhart is the strong but silent type, preferring to let his fists do the talking. His introduction shows promise for whatâ€™s to come, taking place in a grimy dive bar. Heâ€™s fresh out of jail and looking for those who double-crossed him, as well as a means of earning a few quick bucks. Due to his criminal history, only the local mafia boss is willing to provide Lockhart with work. The dirtiest work imaginable, of course. 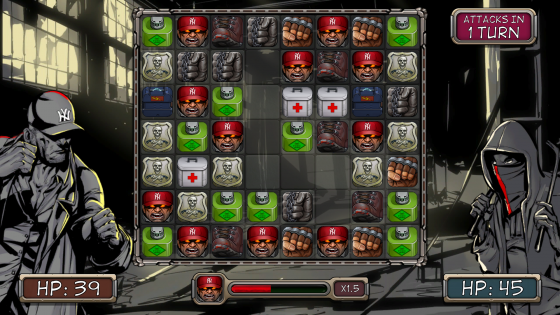 It so transpires Lockhart has a soft spot for ladies of the night, with numerous missions taking place in a seedy strip club. Cue dozens of comic book panels with topless females, and one awkward sex scene. Lockhart keeps a watchful eye on the girls â€“ Candy, Goldie, and Bliss – and soon unlikely friendships form, with the chisel-jawed protagonist stepping into harmâ€™s way to keep the girls safe. These good intentions eventually become tangled with the mafiaâ€™s operations, resulting in lots of opportunities for fisticuffs, in addition to four optional paths through the storyline.

Unusually, the odds are always stacked in your favour

Substantial damage is caused by matching fist and blood-stained boot icons, while toxic gas and tasers cause minimal harm. Matching three health packs allows Lockhart to heal, with health icons becoming scarcer during later battles, while accidentally matching police icons inadvertently causes self-damage. Not that this affects the difficulty to any major degree. Unusually, the odds are always stacked in your favour â€“ thereâ€™s no countdown timer, giving infinite time to plan every move, and it’s easy to raise available health higher than the 100hp default.

Peculiarly for the genre, any icon either in the horizontal or vertical axis can be used. While this keeps battles flowing swiftly, it also makes things feel overly simplistic. 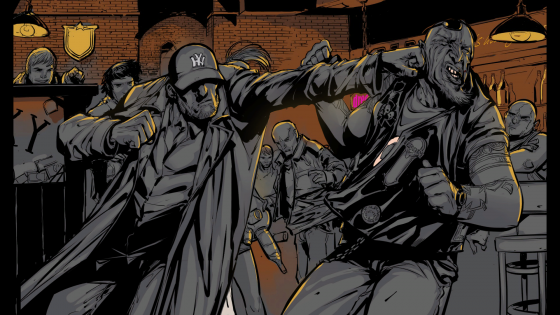 Throwing further help your way, Lockhart gains additional perks â€“ linked to medical disorders, unpleasantly â€“ that can prompt the opposition to miss a turn, and so on. Lockhart later gains knuckledusters and can attack using broken bottles, while the chance to buy a gun is a focal plot point.

Missions are selected via a smartly drawn map screen. We expected the story to eventually move to another part of town, but no, all available locations are found on a single screen. Sometimes a choice of two locations will appear, and this is where the storyline takes different routes. You can imagine our surprise upon reaching one of the four endings after just an hour of play. On our second playthrough the available paths became less cloudyâ€¦until we reached a point with two dead ends, leading to two more endings.

This left us with the fourth and final ending, taking one more playthrough â€“ which meant playing through the gameâ€™s opening for a third time â€“ ultimately resulting in a three-hour runtime.

All four endings are rather unfulfilling, a fact not helped by the lack of challenge. The storyline isnâ€™t particularly engrossing either, despite showing promise initially. The opening scene presents a few dialogue choices, but after this, instances of optional dialogue are few. Imagine a Telltale adventure where only two optional choices are given throughout the episode, and youâ€™ll get an idea of Lux Obscuraâ€™s dialogue restrictions.

Itâ€™s a shame, as a decent story may have managed to elevate things. Unquestionably, Lux Obscura is a game using sex and violence to stand out and sell. But rather than present itself as mature and edgy, it comes off as cheap and crass. For Â£6.39 you get some effortless achievements, the chance to gaze at comic book boobies – if that’s your thing – and a sketchy, often awkward, storyline.

We should be grateful trashy experiences like this arenâ€™t too common nowadays.