Twin-stick shooters tend to be instantly gratifying arcade-like experiences, born out of a studioâ€™s love for such classics as Robotron 2084, Smash TV, and Geometry Wars. Despite the nonsensical name, a promise of guts and gore, and abundance of animal puns (â€œLetâ€™s make like hay and bail!â€), Vicious Attack Llama Apocalypse is not at all arcade-like, and surprisingly slow burning.

Why itâ€™s almost as deceptive as a real-life llama.

Itâ€™s simple enough to pick-up and play, of course, but staying alive is another matter. The levels (three abandoned cities, split into ten districts) are remarkably lengthy, taking around 30-40 minutes to clear, and there are no checkpoints or health packs whatsoever. Generally, your overpowered mech can withstand around 7-8 hits, although itâ€™s possible to lose a huge chunk of health if straying too close to exploding cars. Or the exploding llamas, which soon rear their ugly heads. 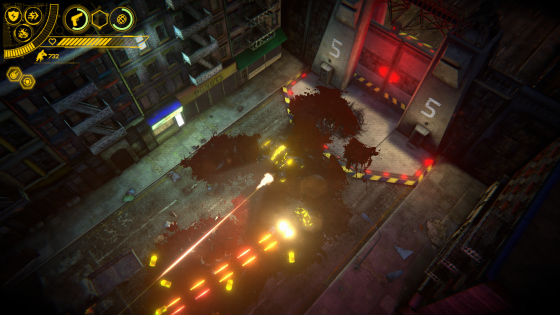 The mech â€“ provided by Llamazon, the online retailer that evoked the apocalypse by replacing their llama workforce with drones â€“ does have a few nifty tricks to ensure survival. Upgrades can also be gained by beating challenges and sticking with certain weapons. Once upgrades are unlocked they become far more common, thus giving a fighting chance of finally reaching the final district.

We have no qualms in admitting VALAâ€™s first stage took us somewhere between 2-3 hours to complete. That time was spent experimenting with weapon combos (two weapons can be equipped and used at once) and mastering the dash and ground-smash abilities. Dashing allows the hordes to be flanked, while the ground-smash turns all surrounding llamas into crimson-hued mush.

These skills require energy, and as such, must be used sparingly. Additionally, the mech has a shield which likewise drains energy reserves. 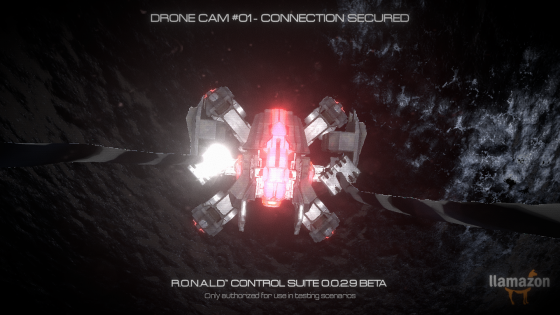 Initially, itâ€™s easy to forget the shield exists. Come the second district, itâ€™s essential to use it proficiently. When the perk-unlocking challenges â€“ which mostly involve destroying phone boxes, lamp posts, and other inanimate objects â€“ start to dry up, you know there are no more unlocks to presently gain. From thereon in, itâ€™s a case of using the ordnance granted while grinding on that stage.

VALA can be surprisingly tense, making that eventual victory all the more rewarding

The starting weapon is a pair of pistols, which eventually â€˜evolveâ€™ into a pair of machine guns. As for the more nonsensical weapons, thereâ€™s a â€˜Contra-bandâ€™ rifle which emits 8-bit explosions, and a freeze ray. New perks are bestowed by Llamazonâ€™s drones â€“ including rings of fire, and projectile (llama spit) reflectors â€“ often dished out at random. Indeed, thereâ€™s a roguelike twist to VALA â€“ districts are generated at random, with certain gates handing out rewards. Llama waves are equally unpredictable, although the female co-pilot always gives a heads up.

Only the end zones remain unchanged from one district to the next, taking the form of maze-like sewers and science labs. When reaching this point, itâ€™s likely that youâ€™ve spent at least 30 minutes battling llamas and have the scars to prove it, limping by with barely any health left. During times like this VALA can be surprisingly tense, making that eventual victory all the more rewarding.

For your efforts, thereâ€™s a story-expanding cut-scene at the end of each stage, all of which continue the daft sense of humour found elsewhere.

In terms of presentation elsewhere, VALA is reasonably slick. Couch co-op is an option, giving a slightly easier ride. The visuals are sharp, boasting detailed backdrops and some subtle filters. Trash bellows down the deserted streets and the llamas come thick and fast. And while the music plays on a continuous loop, and as such doesnâ€™t change depending on location or situation, it doesnâ€™t grate. Some of the one-liners do irritate after a while, though, particularly the quips from electronic district barriers. â€œHey, I can still see a llama behind you. Come back when youâ€™ve killed â€˜em all!â€

Requiring a degree of commitment, VALA comes with a few caveats. Those hoping for an easy going quick-fix of frantic shooting may be better off looking elsewhere. If you arenâ€™t one to back down from a challenge, then step forward â€“ VALA will test your mettle and put a smile on your face.