Many gamers went down to Paradise City last week â€“ EAâ€™s Burnout Paradise Remastered is the UKâ€™s new number one.

The last Burnout to take the top spot was, coincidentally, Burnout Paradise in 2008.

Sales were apparently split 78% PS4/22% on Xbox One. EA Access and the fact that the original is Xbox One BC probably played part in that. 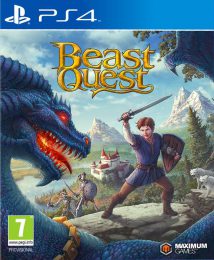 Burnout Paradise Remastered didnâ€™t manage to beat Burnout 3: Takedownâ€™s week one sales, though. We wonder if a brand-new Burnout could manage it.

Kirby Star Allies is off to a good start, too. Itâ€™s the highest-charting Kirby game ever, beating previous (joint) record holders Kirby Triple Deluxe and Kirby: Planet Robobot, both of which debuted at #15.

Zelda: BotW remains at #10 for the second week running.

As for last weekâ€™s new arrivals, the terrible Bravo Team drops from #3 all the way to #30, while after debuting at #2 TT Isle of Man: Ride on the Edge is now nowhere to be seen.