With SEGA Forever providing a way for the former platform holder to re-release their back-catalogue, this weekâ€™s SEGA Mega Drive/Genesis Classics Collection reveal came as a surprise.

The fact that thereâ€™s no Switch version, less so. Weâ€™d wager this has something to do with the lucrative Virtual Console service hitting the Switch eventually, allowing SEGA to charge Â£4-Â£5 per title. Itâ€™s a shame. At least SEGA Forever allows us to play 16-bit classics on the go until then.

We can live with the fact that the Ecco the Dolphin trilogy (Ecco Jnr!) is no longer present, although the first in the series wouldâ€™ve been welcome. The fact that Sonic 3 and Sonic & Knuckles are missing has left many gamers scratching their heads, however.

Their absence appears to be down to music licensing issues. The gameâ€™s soundtrack is a legal minefield, as both Michael Jackson and Brad Buxer directly sampled songs from their respective discographies. SEGA has found workarounds in the past, giving the PC re-release alternative music, but it seems theyâ€™ve opted to omit them completely.

The good news is that the new titles are all welcome additions. We have Alien Solider and Gunstar Heroes from Treasure, ToeJam & Earl and its lesser-liked side-scrolling sequel, The Revenge of Shinobi, Wonder Boy III and Wonder Boy in Monster World, Space Harrier II, Landstalker, Light Crusader, Galaxy Force II, Crackdown and Bio-Hazard Battle. 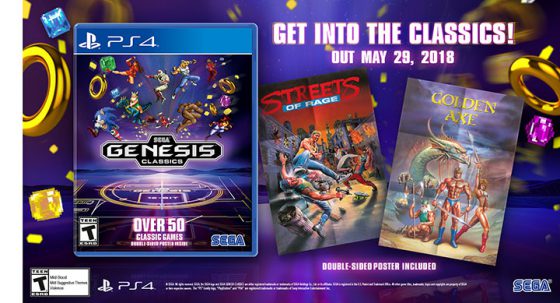 Itâ€™s often mistakenly reported, or simply assumed, that SEGA owns the rights to ToeJam & Earl. This isnâ€™t the case – ToeJam & Earl Productions owns the characters, and so their inclusion suggests a deal was struck somewhere along the line. With a new TJ&E due out this year, both parties have clearly benefitted.

Sweetening the deal further, a double-sided poster is being thrown in. Marketing material reveals itâ€™ll feature iconic box art from Streets of Rage and Golden Axe.

Weâ€™re hoping SEGA will reveal a selection of â€˜bonusâ€™ games in the coming months â€“ even the PS2â€™s Mega Drive compilation featured the arcade iterations of Altered Beast and Zaxxon.