Early in the magazineâ€™s life, Retro Gamer often came with a CD-ROM filled with various homebrew games and â€˜80s classics. But as the UK publication grew the cover CD was eventually dropped in favour of focusing attention elsewhere. 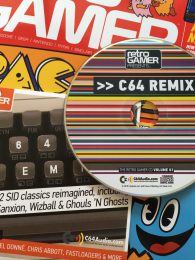 This month – thirteen years since the last Retro Gamer cover disc â€“ a free CD once again graces the cover.

The CD is labelled â€˜Volume 01â€™ which suggests we may see other cover discs in the future.

The C64 love doesnâ€™t end there as issue #179 also comes with a double-sided poster featuring the breadbin itself and a smattering of artwork from the late Bob Wakelin.

Legendary mascot Pac-Man takes the cover meanwhile, with not one but two features on the yellow fellow inside â€“ the story of Tod Frye’s Atari 2600 port, which made him an overnight millionaire, and an Ultimate Guide to the arcade classic Pac-Mania.