To say this weekâ€™s UK top five comes as a surprise is an understatement.

The evergreen GTA V re-claims no.1, making it fifteen weeks in total. Then at #2 itâ€™s a new arrival; one that was flying under the radar somewhat – BigBenâ€™s TT Isle of Man: Ride on the Edge. 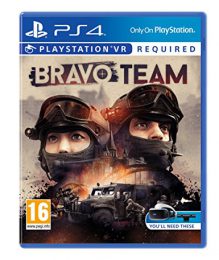 At #3 another new release charts higher than anticipated â€“ Sonyâ€™s PSVR shooter Bravo Team, which currently has a sloppy Metacritic of 48%.

The retail release of Life is Strange: Before the Storm debuts at #18. Final Fantasy XV: Royal Edition puts in a top 40 showing, too, making #31.

Party game package Scribblenauts Showdown failed to break the chart, meanwhile. As we casually mentioned elsewhere, the fact that itâ€™s almost full-price (Â£34.99) may have put some gamers off.

It isnâ€™t the only recent release to fail to make the top 40 â€“ arcade racer Gravel parked up at a lowly #42 last week. Of course, digital sales may have picked up some slack.

Also of note: Metal Gear Survive looks set to depart the chart after just a few weeks on sale, dropping from #17 to #39. Only a colossal price drop can save it now.