The opening to this 18th-century adventure introduces us to a mother and son with an unlikely alliance. Louis and Sarah de Richet are members of the Golden Order, an influential secret society that dabbles in historical, political, and religious matters. Think along the lines of The Simpsonsâ€™ Stonecutters cult, but with less Oscar night rigging.

During the intro sequence, which entails escaping a scuffle unscathed, it quickly becomes apparent that both Louis and Sarah are affluent, educated, and quick-witted. Louis isnâ€™t a genius of Sherlock Holmes proportions, however, often caught off-guard and able to admit to his own mistakes. Forever humble, heâ€™s still learning the ways of the order; something that makes him instantly likeable. Sarah meanwhile has an air of Agatha Christie about her, due to being smart, sharp-tongued, and unwilling to back down. Sheâ€™s one of the orderâ€™s longest-serving members.

Not a great deal of time is given to full acquaint with Sarah de Richet – whilst attending a swanky meeting for Golden Order members, she mysteriously vanishes. 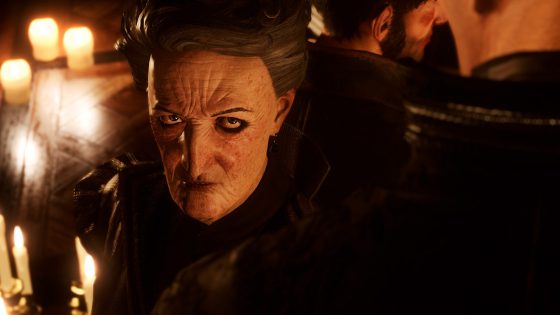 And so, this first episode involves Louis travelling to the private island where the shindig is being held to track down his mother’s whereabouts. After mingling with other esteemed guests, including the recently elected President Washington and a young, rather pompous, Napoleon Bonaparte it soon emerges that not everybody at the lustrous bash holds Sarah in high regard.

Split over four chapters, the entirety of the episode is spent within Lord Mortimerâ€™s antique-filled abode. Rather than be on hand to greet his guests, Lord Mortimer is also inexplicably absent, leaving the courteous but unnervingly stern Sir Gregory Holm to temporarily take the helm. Adding further mystery and intrigue, the reason everybody has been summoned to the island isnâ€™t entirely clear either, leaving guests to come to their own conclusions.

Essentially, The Council is the lovechild of 2014â€™s Assassinâ€™s Creed: Unity and a typical Telltale adventure â€“ a heavily narrative driven story, fuelled by choices and decisions that can alter outcomes. Dialogue choices are deeper and more complex than simply figuring out the most morally correct path, though. This mostly stems from the fact that developer Big Bad Wolf has thrown a few RPG elements into the mix, including three-skill sets (Detective, Occultist and Diplomat), unlockable abilities that effect Louis’ social influence, and a levelling-up system. 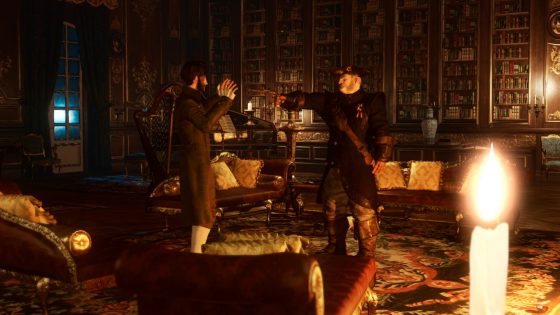 Louis also gains both good and bad traits and can additionally discover weaknesses of other characters, which in turn opens more dialogue choices and opportunities. Some traits can make winning somebodyâ€™s friendship or trust a simpler process, while a certain ability makes the episodeâ€™s one and only puzzle a tad easier.

Together with alternative optional routes, including the chance to sneak into guestâ€™s rooms while theyâ€™re asleep, The Council presents plenty of scope for additional playthroughs. Any missed opportunities are made apparent at the end of each chapter, some of which may not be immediately obvious; a feature thatâ€™s more helpful than it may initially seem.

Adding further incentive to return, a number of confrontations feature – theyâ€™re something of a highlight due to requiring quick decisions. Bad choices can void any chance of gaining somebodyâ€™s loyalty, altering the storyline. The first confrontation involves convincing a softly spoken Pastor to hand over an important letter. Over the course of just three dialogue choices, itâ€™s up to you to gain his trust. Failed confrontations can, potentially, be swung in your favour via a last-ditch effort. Later confrontations are harder to sway due to featuring as many as six dialogue options, although some of these may be locked if certain character traits are absent. 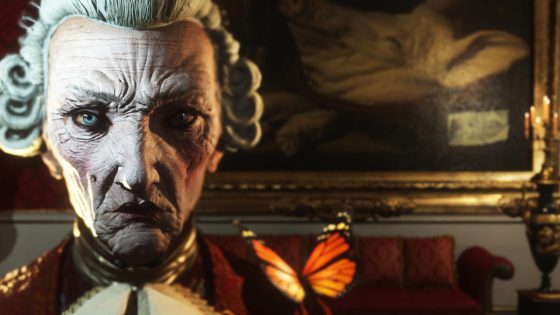 To elaborate, Louis can be moulded to be as daring, educated, sly, or as gentlemanly as you like. A more politically minded Louis can partake in deeper dinner conversations, and by becoming bi-lingual the likeable lead can read documents written in Latin. Alternatively, taking a more deceptive path opens lockpicking and similar skills. Itâ€™s even possible to join a Duchess â€“ the charismatic and daring Emily Hillsborrow, another major character – in the bedroom, seduction techniques permitting.

Louis can be moulded to be as daring, educated, sly, or as gentlemanly as you like

Many skills require â€˜focus pointsâ€™ which can be refilled by consuming Royal Jelly. Itâ€™s best not to get hooked on the gelatinous goo, as overconsumption can cause Louis to become intoxicated and gain wayward traits. Manuscripts are another collectable, able to temporarily boost stats, with one in particular requiring missing pages to be found. And on top of this, there are collectable coins to find.

In terms of presentation, itâ€™s apparent The Council has been blessed with a modest budget. Some of the voice work is questionable (Sarah sounds far younger than sheâ€™s supposed to be), but it never grates despite some stuffy faux accents. The buttery tones of George Washington are a clear highlight, making him that even more likeable, even though heâ€™s already portrayed as a kind and caring soul. Character models are detailed, with visible liver spots and unsightly hairy moles present on older party guests, but facial animation often comes across as robotic. A few characters have more exaggerated features than others, too, including Louis himself.

Lord Mortimerâ€™s exuberant interior provides much of the gameâ€™s spectacle, with renowned artwork hanging on the walls and various imposing statues gracing the foyer. Conversation pieces, one and all. 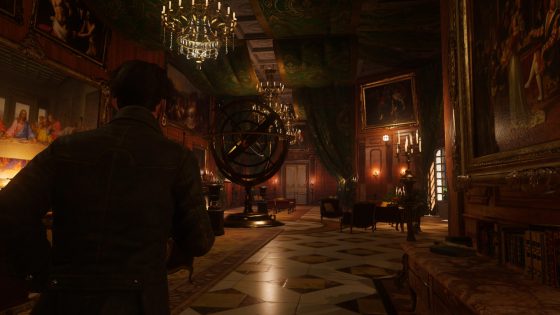 Unlike tardy host Lord Mortimer, The Council makes a good first impression. The central characters are incredibly likeable, with a surprising amount of depth to their upper-class personas. Some have ulterior motives, as well as secrets theyâ€™re keen to keep.

While the mansion is never fully opened-up to explore, each chapter is set in a different location and sneaking around at night (no forced stealth section, hurrah!) makes a welcome change from making acquaintances and dinnertime small talk.

Being the first part of a new episodic series from a new studio (disregarding the fact that Styx: Shards of Darkness developers Cyanide gave a helping hand), we didnâ€™t really know what to expect from The Council. Although it does follow the tried and tested Telltale story formula to some degree, Big Bad Wolf has been brave and bold enough to add their own twists. Significant twists, at that, which dramatically change the storyline.

Although this introduction does leave more than a few questions unanswered, it still sets the stage for a doubtlessly eventful adventure. If youâ€™re going to take away anything from this review, it should be this: we would have jumped straight into episode two, if it were available, without hesitation.