Either we missed something between Metal Gear Surviveâ€™s reveal and launch, or Konami has pulled off some classic misdirection. After its somewhat disastrous debut, many gamers billed Survive as a generic co-op zombie shooter with tacked-on crafting elements, simply because thatâ€™s what the trailer portrayed. It was deemed the safest and laziest route for Konami to take, and fans were livid.

While the end result certainly lacks Hideo Kojima’s trademark eccentric imagination, to call it a generic zombie shooter would be way off the mark â€“ itâ€™s a slow-paced survival game thatâ€™s single-player oriented, in which confrontations with the zombie-like Wanderers arenâ€™t all that common. Thatâ€™s to say, more time is spent scavenging than shooting.

Playing as a customisable soldier dropped into an eerie alternate dimension, the focus is on enduring the harsh and desolate desert while trying to find a way home. 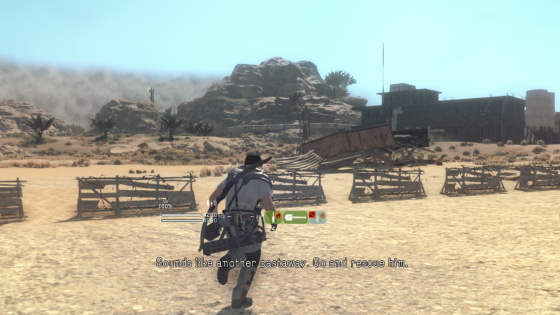 This entails hunting animals (and stuffing gerbils into your pockets), marking water sources on the map, and cooking hearty soups when back at the ramshackle base. Weapons meanwhile are created from resources, with a humble spear â€“ which can pierce erectable wire fences â€“ being the starting weapon. Firearms arenâ€™t introduced until later, and even then, ammo is severely limited.

To begin with, the hunger and thirst gauges are massive burdens. Clean water, in particular, is scarce, making fully exploring the open-world off-putting. Lessons are learned the hard way â€“ we headed out on a few missions ill-prepared and suffered because of it. When a mission fails all gathered resources are lost as well as any progress made. We once ran out of O2 â€“ another gauge to keep tabs on â€“ just a few yards away from a teleporter. Thirty minutes of playtime down the pan.

A comparison with Monster Hunter World isnâ€™t entirely invalid â€“ the gameplay loop is reasonably similar. Prepare, craft, undertake a mission, and bring home the spoils. A game of self-improvement. 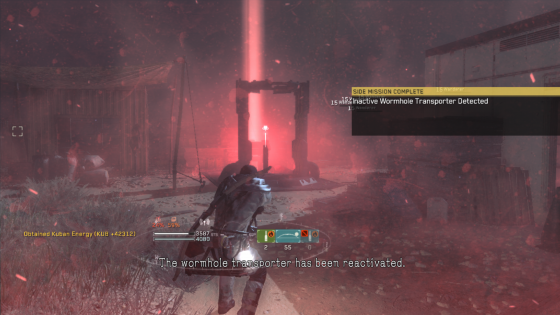 Missions are dealt by two surprisingly articulate AI programs, nestled inside the baseâ€™s core. Mostly, youâ€™re tasked with heading to Wanderer-filled locations to retrieve â€˜memory boardsâ€™ or locating the whereabouts of other castaways trapped within the washed-out world. Thatâ€™s washed-out in the sense that the world is almost entirely lacking in colour â€“ sandy browns and grey industrial complexes await, amplifying the sense of desolation further.

Over time, new structures can be added to the base. Different workbenches, rainwater tanks, potato patches, stronger fortifications and more. Many make life easier; around 10 hours in we were able to head out into the wilderness with full stomachs, a backpack full of rations, and plenty of ammo. A far cry from the opening hours, where it feels like danger and death lurk around every corner.

As the base grows, so do your responsibilities â€“ rescued citizens eventually require food and medical resources too. Thankfully theyâ€™re willing to earn their keep, able to undertake scavenging missions. 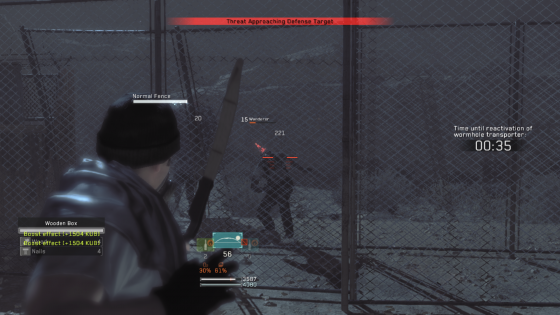 Thereâ€™s a nice bit of repetition, jogging across landscapes that soon feel familiar, hoping to venture that little bit further than before. Most of the desert is cloaked in darkness and fog, which can make navigation tricky. We found ourselves constantly opening the map screen, due to the absence of a permanently on-screen mini-map. The rockiness of the terrane often forces you to seek alternative routes, even provoking a change of plan if O2 is about to deplete.

Teleportation devices make exploration easier. Activating a teleporter attracts a waft of Wanderers, and during these instances, Survive does feel like a typical zombie shooter â€“ the crystal-covered creatures are brainless and easily outwitted. They donâ€™t pose much of a threat, especially when using firearms against them, and can be easily repelled with molotov cocktails. Keep a full inventory of molotovs, ammo (we favoured the bow and arrow, as arrows can be reclaimed) and erectable wire fences, and youâ€™ll find most confrontations can be concluded with minimal fuss. Fortunately, the required resources for all of these are easily found, allowing stockpiles to eventually amass. 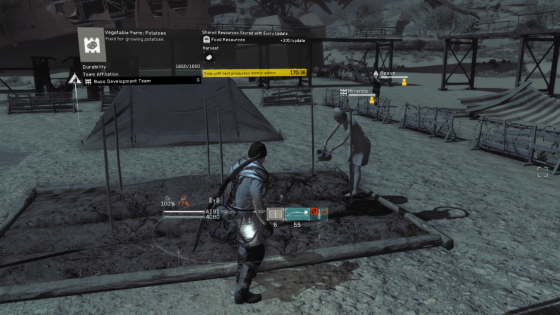 A good way to procure resources, and maybe snag an uncommon weapon or two, is to play online. Co-op mode allows four others to team up and fight waves of Wanderers while protecting generators. The online hub is easily the gameâ€™s most lavish feature, in terms of style, with areas to craft and prepare for battle. Missions are few to begin with, as many are gated-off to high-level players â€“ a notable shortcoming. Generally, online matches last around 15 minutes and are far more action-orientated than the main game.

As resources carry over from single-player to online itâ€™s still essential to ensure there are enough provisions in your backpack. Fail to do so and you may find yourself starving to death before the match ends. Itâ€™s a strange situation to face, certainly, removing the ability to jump into a co-op match on a whim. 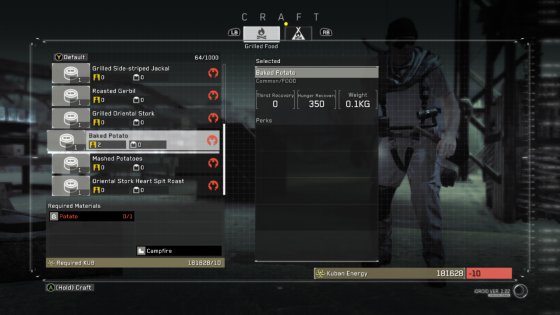 While Metal Gear Survive is by no means fundamentally flawed, the slow-pace and general drabness make for an experience that rarely thrills. It reminds us of such early Japanese-developed last-gen titles as Vampire Rain, Mindjack, and Quantum Theory â€“ games intended to appeal to western gamers by mimicking current trends but failing to capture that elusive spark.

Hereâ€™s a game that takes you to an alternate dimension, but has you collecting wood and nails and cooking baked potatoes on a campfire. Occasional moments of sheer panic, as you try and make it back to base with minimal health, are a clear high note. But for every high, thereâ€™s toil.

A rigid design document has seemingly stamped out any creative flair here, forcing Konamiâ€™s developers to churn out a me-too product thatâ€™s lacking in identity. What should have been a compelling and entertaining experience is, quite simply, a product intended to appeal to the masses.

Thereâ€™s nothing wrong with franchise off-shoots. Survive, however, is a misfire.