This weekâ€™s UK chart benefitted from â€˜the half-term effectâ€™ (to quote Chart-Track), with 28 titles in the top 40 seeing a sales increase.

It was FIFA 18 that came out on top, thanks to the Switch version receiving a cut-price. Sales were up a resounding 494% on Nintendoâ€™s system, outperforming launch week.

While it did manage to outsell the Xbox One version, which is no easy feat, the PS4 version was still the biggest selling last week. 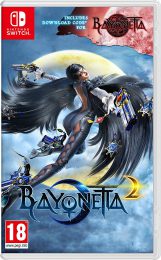 GTA V rose to #3, with sales up 113%, while Monster Hunter World saw a slight dip in sales yet still managed to hold onto #4.

Things get interesting again at #5. This is where the Switch version of Bayonetta 2 debuts, two positions higher than 2014â€™s Wii U iteration. However, the Wii U version had stronger first week sales, by some 25%.

Did hardcore Bayonetta fans refuse to repurchase the seductive hack â€˜n and slasher? Perhaps, but itâ€™s more likely that the digital eShop release bridged the gap in figures.

The disappointing Dynasty Warriors 9 made its mark at #13, while Square-Enixâ€™s Secret of Mana remake took #24. Monster Energy Supercross arrived at #25, despite it failing to surface in any single-format chart.

As for last weekâ€™s remaining releases, the retail release of Overcooked made #15 in the Switch chart while Atlusâ€™ JRPG Radiant Historia debuted at #8 in the 3DS chart, becoming one of just two third-party titles in the 3DS top twenty.