On paper, this â€˜90s platformer tribute sounds like a bum deal. The Kickstarter funded PC version â€“ released in December 2016 â€“ was subtitled â€˜World Oneâ€™ due to merely being the first part of an ongoing series. The new PS4/XO versions lose this subtitle, but as before, Radâ€™s adventure both begins and ends in the first world – a magical forest realm. While this may sound like a swizz (imagine if the first Sonic the Hedgehog was set entirely in Green Hill Zone), all the stops have been pulled to ensure nobody feels short-changed, despite it not quite feeling like a self-contained adventure.

The plot sees typical â€˜90s youth Rad Rodgers and Dusty, his foul-mouthed sentient game console, (a sanitised â€˜kidâ€™s modeâ€™ is an option, incidentally) sucked into a video game world. Fully aware of their virtual surroundings, fourth-wall breaking jokes and film/gaming references are rife, in addition to some vulgarity from Dusty (voiced by Jon St. John). The duo work as a team, with Dustyâ€™s mechanical arms used to traverse monkey bars, as well as wallop enemies with an almighty clout, while Rad mows down foes with a rapid-fire machine gun. 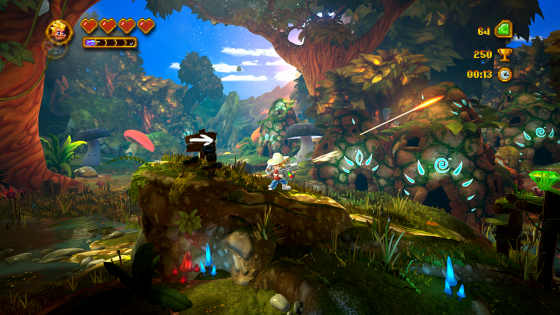 The PC version was likened to a mixture of Jazz Jackrabbit and Commander Keen, but in our eyes, Earthworm Jim is a better comparison due to the backpack buddy system and a mix of run â€˜n gunning and traditional platforming.

We had concerns before diving in, worried about a poor sense of progression and a fleeting runtime â€“ hence the opening paragraph â€“ but it soon becomes apparent that Rad Rodgers has been put together by a dedicated and experienced team. Itâ€™s no slapdash effort, leaps and bounds over the likes of Giana Sisters: Twisted Dreams and Bubsy: The Woolies Strike Back. Visually, itâ€™s on par with these two though. Colourful, but due to the constantly zooming camera some texture work occasionally becomes lost or grainy.

The levels are huge â€“ some taking as long as 30 minutes to beat â€“ and theyâ€™re packed with secrets galore. All eight levels (two more than the PC original, prior to an incoming update) are remarkably different from one another too, commencing in a bright and colourful woodland glen before leading into dank swamps, a horizontally scrolling waterfall stage, and a few labyrinth-like caverns. Each level involves tracking down four â€˜Exit Chunksâ€™ and the occasional door key or two, some of which can be easily missed because of branching paths and non-linear layouts. 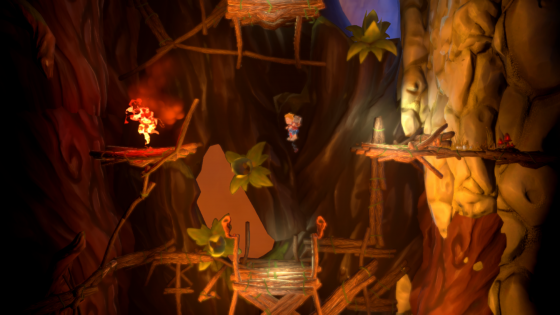 The difficulty level notably spikes towards the end, veering on the frustrating, mostly due to introducing spike-covered floors and lasers that can kill with one hit. The new â€˜connect conduits without crossing beamsâ€™ mini-game can irritate likewise, especially towards the end, with one punishing instance prompting us to join in with Dustyâ€™s swearing. A sour note, and the only thing to suggest that maybe time was starting to become tight towards the end of development.

Three new bonus stages also feature, helping to induce variety. These play like Doodle Jump, of all things, with the likeable duo bouncing their way skyward on a pogo stick. These stages can be over in mere seconds, and the fact that restarts arenâ€™t instant seems an oversight â€“ thereâ€™s a loading screen to endure between attempts. Thankfully the pogo stages are optional, and the â€˜end gameâ€™ focuses on achieving 100% completion on every single stage, making it possible to return. 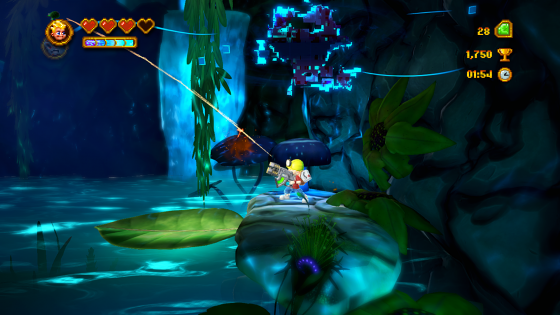 Those fond of mopping up collectables and hunting down enemies will be in their element, as this is a focal part of Rad Rodgerâ€™s design. Item tallies make it easy to keep track of progress, and there are numerous rewards – including achievements, artwork galleries, and new hats â€“ for those who want to see and find absolutely everything. This sometimes calls for using the photo mode for advantageous gains, panning the camera around to find hidden rooms and such.

The runtime clocked in at just over 9 hours by the point we were ready to put the joypad down â€“ an admirable figure, and one way higher than the 3-4 hours we were initially expecting. Letâ€™s just hope that Rad Rodgers: World Two happens at some point. Weâ€™d hate to leave Rad and Dusty hanging, and thereâ€™s clearly talent at Slipgate Studios. It puts many similar â€™90s revivalâ€™ platformers to shame.