Miner-cum-platformer SteamWorld Dig â€“ originally released on 3DS in 2013, and on consoles a year later â€“ is a game that gets to the point quickly. Within minutes of booting it up, you find your uncle’s corpse and his trusty pickaxe and descend into the nearby mine to scavenge for gems.

It really isnâ€™t interested in dragging out its ideas. The pace is almost Nintendo-like, in fact, in how quickly it introduces and discards new elements. It’s this pace that makes it such a joy to play.

You play as Rusty, a robot, taking over your father’s mine. You dig into the dirt below a ramshackle town, uncover gems, and bring them back to the surface to trade in for cash and upgrades. It’s a simple gameplay loop, but one that hides many intricacies. 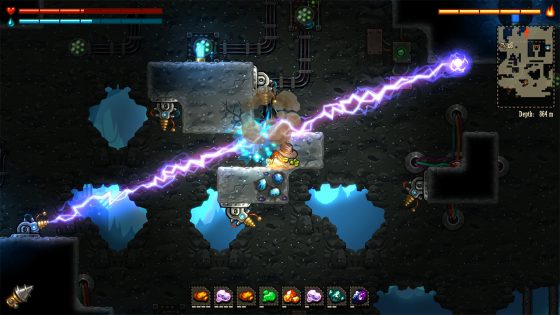 Digging, for instance, has a nice puzzle game slant to it. Finding the right path to get to a gem can be extremely rewarding, and you must be careful in the route that you dig, making sure that after you’ve carved out the soil you can make it back to the surface.

The pace is almost Nintendo-like

Upgrades also bring their own complications. Over the course of the game, new abilities are gained that allow access to new areas of the map. One of these is the drill, which you quickly come to rely on. Unfortunately, the drill uses water, which becomes harder and harder to find down in the depths of the mine. Suddenly, a simple game about digging becomes one about resource preservation.

The only downside is combat. The underground contains numerous enemies, which are a chore to dispatch, with combat mostly involving waiting for the enemy to approach and swinging Rustyâ€™s pickaxe. Luckily, most enemies can be avoided by simply plotting a route around them.

SteamWorld Dig still feels remarkably fresh and compact, five years on. Even on a storefront packed with wonderful games, it stands out as being well worth both your time and money.