In a battle between colossus killers and monster hunters, it was Sonyâ€™s Shadow of the Colossus that emerged victorious, dislodging Capcomâ€™s Monster Hunter: World from the UK chart top spot.

All signs point to the ravishing remake being a runaway success. Sales were 73% higher than that of the PS2 original, which also took no.1 back in 2006. That impressive figure doesnâ€™t include digital sales either. In another colossal win for Sony, itâ€™s their 8th PS4 exclusive to take no.1. 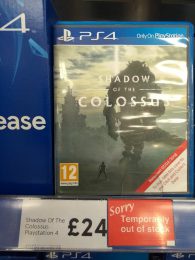 At #6 itâ€™s Call of Duty: WWII, marking the first time it has left the top five.

Mario Kart 8 Deluxe stays put at #7, as does Super Mario Odyssey at #8.

A minor price-cut has helped AC: Origins re-enter the top ten, rising from #15 to #9.

Retailer promotion has also helped The Evil Within 2 re-enter the chart, taking #10. The horror adventure was nowhere to be seen in last weekâ€™s top 40.

Dragon Quest: Builders on Switch was the only other top 40 new arrival, punching in at #31. The retail release of Portal Knights did manage to make #15 in the Switch chart, however.