Following sightings of PS4 and Xbox One games in Poundland, it seems that the high street giant is about to tread on the toes of GAME and CeX.

Due to the nature of this story (can you imagine Poundland issuing a press release?) details are sketchy. It appears the retailer has opted for fixed prices, with PS4/XO games clocking in at a fiver, and Xbox 360 and PS3 games priced at Â£2 for common titles and Â£5 for more desirable games such as Call of Duty: Ghosts and Dark Souls II. 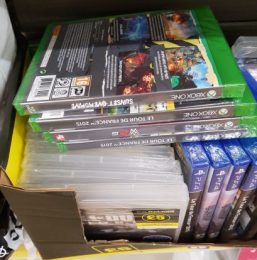 Curiously, stock is a mixture of new (factory sealed) and pre-owned.

Reports suggest Music Magpie is the supplier of Poundlandâ€™s new â€˜Reloadâ€™ range, which is something to be thankful for â€“ the online store refurbs discs before reselling.

Even though the likes of Destiny can be had for less than Â£5 elsewhere, Poundlandâ€™s new line is bound to prove popular. Itâ€™ll be interesting to see if Music Magpie can provide a steady flow of stock.