In 2001, UK retailer GAME revealed plans to stock a new range of retro systems and software. This came as a surprise to many as it was still early days for the retro gaming scene. The Mega Drive and SNES remained fresh in gamer’s minds, and only the likes of the Spectrum and Commodore 64 were really seen as retro by this point. In short, the retro market had yet to explode. 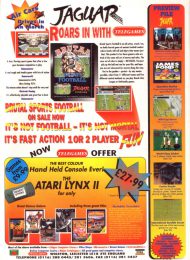 Anybody expecting to see GAME’s shelves lined with ’80s microcomputers and ’90s consoles from SEGA and Nintendo was in for a disappointment. GAME – still trading as Electronics Boutique in some areas – had simply acquired a considerable amount of surplus stock from specialist retailer Telegames, including brand new Atari Jaguars and refurbished Atari Lynx and SEGA Game Gear handhelds.

Telegames’ US arm swooped in to grab Atari’s liquidated stock in 1995, continuing support for the cult system with new releases, including Worms. The retailer routinely ran adverts in gaming magazines for many years after Atari’s demise, offering both the Jaguar and Lynx at knockdown prices.

As for the SEGA Game Gears, evidence suggests these were the revised, cheaper, models Majesco released in the US. Majesco had attempted to give the Game Gear a second lease of life in the States, promoting it as a low-budget ($29.99) alternative to the Game Boy Advance. Telegames had presumably also snaffled Majesco’s unsold stock at one point.

Come 2001, that unshifted stock was about to be unloaded onto GAME, and for a super low cost. 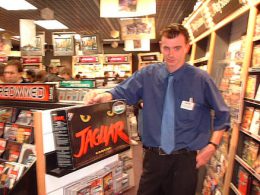 All signs point to a deal being struck during the ECTS 2001 trade show. Telegames had a presence at the event, offloading the aforementioned systems to wholesalers for £10 each. There was a caveat, however – they were only selling systems in bulk. Obviously, this wasn’t a problem for GAME – in 2001, the retailer had a far larger presence in the high street than today. Considering their buying power, there is even a chance they managed to negotiate a deal for less than £10 a unit.

Telegames also offloaded software for each system. Being unsold stock, GAME wasn’t buying in the cream of the crop – these were the titles that failed to sell the first time around, still shrink-wrapped. It’s also worth noting many were US versions. Jaguar software prices started at around £9.99 for common titles such as DOOM, rising to £39.99 for the more exotic likes of Defender 2000.

Alien vs. Predator and Tempest 2000 – the two games that made the system worth owning – were missing from GAME’s range but could reportedly be ordered direct from Telegames for around full price. The assortment of Game Gear titles mostly comprised of sports sims plus late releases such as Primal Rage and Chicago Syndicate. 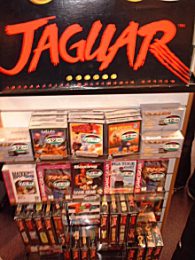 Clearly keen to cash in on childhood memories, Jaguars were originally marked up at £59.99, while the two handhelds were available for £29.99. Prices soon tumbled – old Atari Age forum posts reveal that the Jaguar dropped to £9.99 by December 2001, with software reduced to £7.99.

A brief interview on MyAtari.net (dated February 2002) also reports of £9.99 Jaguars, claiming Christmas shoppers were popping into GAME to buy a PlayStation 2, and leaving with Sony’s hot new system and a cut-price Jaguar.

While GAME’s premature foray into retro gaming may have turned a profit initially, making a quick buck off dedicated enthusiasts, it appears they ended up selling most of their inventory at cost price.

Withholding stock until it surged in value (boxed Jaguars can fetch between £100-£200 nowadays) is something GAME likely never considered. Indeed, it was an odd proposition – the Jaguar and its peculiar line-up didn’t set tills ringing during the mid-’90s, so gamers were hardly ecstatic to see it back on store shelves after a mere six-year absence.