Those familiar with the previous entries shouldnâ€™t have any major difficulty wrapping their head around this role-playerâ€™s backend, but so much for breaking in new players gently.

Despite the stat-heavy nature of the menus, Van Helsing III is still surprisingly accessible, as well as being instantly gratifying. Helsingâ€™s demonic adversaries attack in large groups but are often reduced to a shower of blood and body parts within seconds, especially when using a character class with heavy firepower. Missions are easy to keep track of, maps are small but high in number â€“ varying from a crystal filled cave to a twisted carnival with â€˜killer clownsâ€™ â€“ and both loot and gold flows freely.

It isnâ€™t particularly punishing either, giving the choice to respawn instantly upon dying, albeit by forfeiting a fistful of gold. 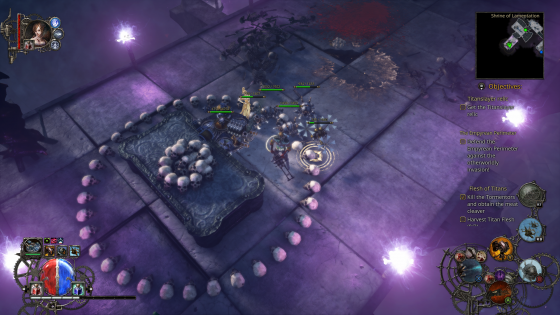 Like before, Lady Katarina remains an invaluable ally. She can be instructed to use either range or melee attacks, and will also gather any overlooked loot if requested. She has her own inventory and upgrade screens (incidentally, itâ€™s uncommon to go more than ten minutes without levelling up), and can carry surplus items. A good thing too, seeing Helsingâ€™s inventory space is severely limited. Itâ€™s easily bulked with relics and essences, both of which can only be put to use when back at the underground resistance base.

The base is largely unchanged from previous games. In fact, an awful lot of assets have been recycled, making this trilogy finale feel more like an expansion – or new episode, if you will – than a full-blown sequel. There are a few new ideas though, including a war table from which Helsing can command an army behind the scenes, and a beast tamer with a Chimera who can be sent on missions. The Chimera levels up through use, and brings back spoils of war usually of considerable worth.

A mystical pig-like merchant can also be summoned by consuming essences, carrying items only for max level players. This has more to do with the end-game though, which mostly entails completing tough challenge-based scenarios. 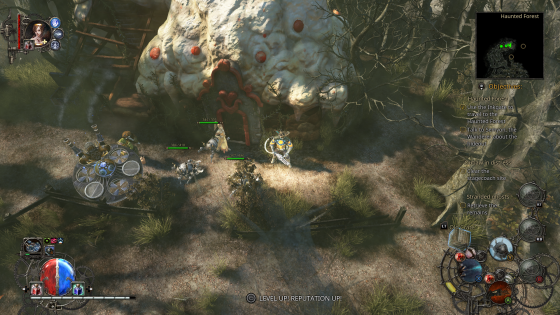 Optional tower defence missions also feature, using series spin-off Deathtrap â€“ a former Xbox One â€˜Games with Goldâ€™ freebie – as a template. Here, traps and turrets must be strategically placed to protect the base from an onslaught of monsters. These missions are more than minor diversions, taking considerable time and effort time to beat. Rise to the challenge and you can easily add an extra 2-3 hours to the gameâ€™s 8-10 hour runtime.

The standard missions are mostly straightforward â€“ head to a new realm via a magic portal, and locate either a relic, new portal, person of importance or similar. A few familiar faces show up along the way, and Lady Katarinaâ€™s backstory is expanded on. Most maps have a side-quest too, and again, theyâ€™re relatively straightforward.

All mission locations and object locations are marked on the on-screen map, so thereâ€™s little scope for aimless wandering. Early locations blur into one another, being a mixture of swamps and forests, while later locations are less run-of-the-mill, including the destroyed remains of a floating city. Surprises are thin on the ground, but there is a pleasing sense of humour present that allows for some subtle pop culture references. 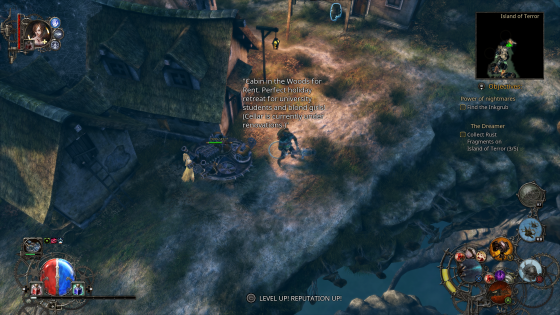 Van Helsing III is an odd proposition. The RPG fundamentals are all present and correct, including online play. Itâ€™s a fast-paced, and in turn, offers a rewarding sense of progression â€“ itâ€™s possible to make significant progress in the space on an hour, levelling-up numerous times.

And while it may appear a little user-unfriendly and undecidedly po-faced initially, it isnâ€™t long until its merits become obvious. Even those unfamiliar with the series can jump in and instantly start slaying, although itâ€™s unlikely newcomers will care for the story.

When taken as a series finale, it falls a little short â€“ this final chapter is light on memorable moments, almost as if developer Neocore created the whole thing while on auto-pilot. Ending with a whimper instead of a bang, Van Helsing III is more than serviceable but hardly a send-off to remember.