Dating back to 2013, Max: The Curse of Brotherhood on Switch is a conversion more belated than most. Itâ€™s a welcome enough eShop addition though, and for a reason that may not be immediately obvious â€“ the seriesâ€™ roots can be traced to 2010’s moderately successful WiiWare game Max & the Magic Marker.

This puzzle-platformer sees you play as the titular Max, searching for his bother, whom he accidentally vanquished into a fantasy realm. Whilst platform games are rarely known for their stories, and Max’s is wafer-thin, it is nice to see the protagonist looking for a sibling rather than trying to rescue a damsel. The few cutscenes are also beautifully presented, with crisp animation and good voice acting.

The elaborate presentation extends to the game itself, which despite being four years old, still looks fantastic. There’s a nice fluidity to the graphics and the lighting effects, making this one of the most attractive games on the eShop. Performance on Switch seems good, too. The frame rate is smooth and the game has been updated to use the Switch’s touchscreen for drawing. 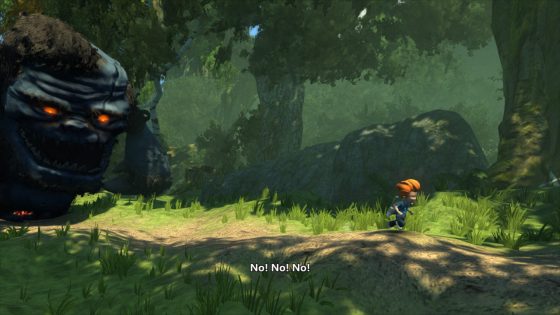 Unfortunately, the care and attention to detail in the graphics doesn’t seem to have been applied to the puzzle design. In his original adventure, Max has a marker that could be used to draw anything to solve puzzles, like the Crayon Physics games. In Max: The Curse of Brotherhood, however, Max can only use his marker to do one of five things.

To wit: raise a platform, draw a branch, draw a vine, draw a jet-stream of water or draw a fireball’s trajectory. These abilities are doled out one at a time as the game progresses. Not only are the actions now limited, but each action has a specific ‘anchor point’. In the screenshot below Max can raise a platform where his pen is and draw a branch where the green highlight is.

This limits the scope of puzzle solving and makes the game less about using your creativity to find a solution and more about executing a solution, something less rewarding and more frustrating. Adding to the frustration is the fact that the controls for the marker aren’t quite good enough. 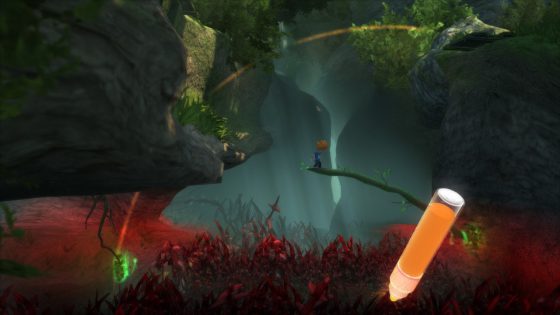 When you want to use the marker’s ability you can do one of two things – either hold down the right trigger and draw with the analogue stick and ‘A’, or you can use the touchscreen. Drawing with the analogue stick is tricky, and when using the touchscreen the drawings never followed my finger. Instead, the marker would appear close to my finger and then follow my movements.

I can understand why the developers chose to do this – you don’t want to cover up what you’re drawing with your finger, but it also makes everything more time-consuming. It’s especially annoying when the game frequently prompts enemies to give chase, forcing you to draw things under time pressure. Sometimes the action will go into slow motion, an admission that the controls aren’t quite quick enough. 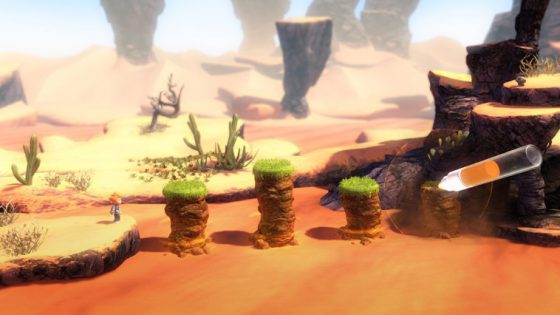 Still, when frustration comes, it will be short-lived. The checkpoint placing is generous, and the action resumes extremely quickly when you die, meaning that even repeating a section a few times doesn’t become irritating. For a patient adult, that is. I do wonder how children would cope with the frustration of persistently dying, especially on the sections where enemies pop out from behind scenery.

Max is almost the definition of a game that’s ‘fine’. It’s attractive and a pleasant enough way to spend six or so hours. Unfortunately, it never really rises above ‘fine’. The repetition of the puzzles and the frustrating control scheme hold it back. Although the developers thought to add extra collectables, there’s little reason to return and achieve 100% completion.