Usually, the digital stores come to standstill between Christmas and New Yearâ€™s Day. There was no seasonal break for the Xbox One store last week though, as a trio of titles turned up unexpectedly.

Dustoff Heli Rescue 2 may resemble one of those terrible, terrible, Minecraft clones that plague the Nintendo eShop, but donâ€™t be so quick to judge â€“ itâ€™s a modern-day take on Desert Strike/Choplifter, with missions that vary from hostage rescue to tower building. The PC version gained a â€˜mostly positiveâ€™ reception on Steam, with one user review claiming that it â€œtook them by surprise.â€

From good to bad. All signs point to Winx Club: Alfea Butterflix Adventures being a (very) late â€˜worst game of 2017â€™ candidate, with user reviews siting terrible controls and appalling visuals. The developers seem to be proud of the fact that it resembles the 2004 PSone Winx Club game, and to make things even worse, it also includes in-app purchases. 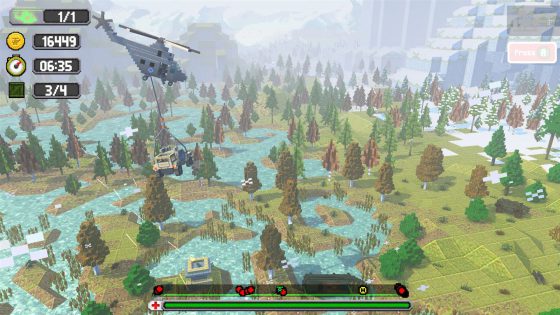 Then there’s The Incredible Adventures of Van Helsing III, one of this monthâ€™s Xbox One freebies. The official release date was 1st January, but Microsoft kindly launched it a few days early. Itâ€™s a Diablo III-style role-player thatâ€™s surprisingly easy to play, despite the overwhelmingly complex menu and inventory screens.

First impressions, ahead of a review, are positive but if you didnâ€™t enjoy Van Helsing II then you probably wonâ€™t find much to enjoy here either â€“ it reuses a lot of content, right down to near-identical presentation.

As for new releases out this week, Outbreak: The New Nightmare hit the US Xbox Store today. The PC version was compared to RE: Outbreak, but for reasons we cannot fathom, the online multiplayer mode has been removed from this console release. Hopefully, Dead Drop Studios will see fit to give us the full package in the future.

Next week: Albert and Otto, and Flying Tigers: Shadow Over China.