No task over the festive period is more arduous than preparing Christmas dinner. Even for those who regularly cook a Sunday lunch with all the trimmings, itâ€™s a meal many are glad they only have to cook once a year.

A Sunday lunch on a grander scale, it isnâ€™t uncommon to ask for an extra pair of hands (or two) to help in the kitchen. Dishing out the jobs sounds like a foolproof plan, but the reality is quite the opposite. Often, the whole ordeal devolves into an impromptu game of twenty questions, as you debate whoâ€™s doing what, while searching for the â€˜goodâ€™ plates and arguing about whoâ€™s going out to the cobweb-filled shed to grab the spare garden chairs.

Then, more questions. Do the kids like sprouts? Heck, do even all the adults at the table like sprouts? Whatâ€™s the ideal serving time â€“ before or after the Queenâ€™s speech? All the while youâ€™re constantly treading on the toes of those coming in and out the kitchen. Itâ€™s a good job the wine is flowing freely. 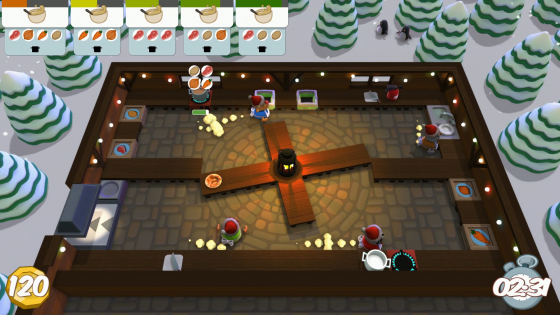 Team 17â€™s Overcooked taps into the messy chaos of food preparation. For those unfamiliar with the indie hit, itâ€™s test of teamwork and organisation skills. Up to four players chop veg, flip burgers, fry food, wash dishes and carry plates of steaming hot food out to the serving hatch. Orders come in fast, varying from quick dishes to platefuls of meat and veg, and every kitchen layout is different from the last. Conveyor belts, sliding platforms, and more are added over time, along with new ways to cook.

In the run-up to Christmas 2016, developer Ghost Town Games launched a festive add-on – an eight stage expansion appropriately titled The Festive Seasoning. Christmas trees, sleigh bells, reindeer, snowmen, Santa hats, warming winter meals, and a racoon in a wheelchair â€“ no yuletide effigy has been left out. Best of all, it includes a fuss-free way to roast a turkey â€“ a flamethrower.

The first few missions are relatively straightforward, fixing up some warming winter soups while the penguins outside waddle by. Then comes the flamethrower, a handy gizmo thatâ€™ll cremate a turkey and roast veg to perfection. Line up a few dishes in a row, and itâ€™s possible to roast the whole lot in one fell swoop. An essential timesaving technique. 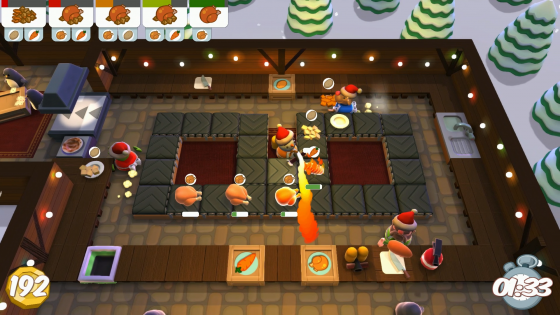 The Festive Seasoning’s final mission is one tough cookie; one that takes lots of planning, several botched attempts, and kitchen management skills to see through to the end. Sound familiar? Here, the kitchen is split into four with a moving platform between the severing hatch, washing area, stockpiles, and cooking pots. Itâ€™s likely youâ€™ll end up crossing paths with players and knocking them off the platform in the process, resulting in a mixture of hilarity and heated words.

It could be said that Overcooked: The Festive Seasoning captures the essence of a modern Christmas â€“ lashings of food, and the potential to turn the kitchen into a war zone if somebody doesnâ€™t take control sharpish. And in the spirit of seasonal generosity, this add-on is available for free.

Weâ€™d like to think nobody in real-life is stupid enough to cook a turkey in their kitchen using a flamethrower. Take it into the garden, for pityâ€™s sake.