Weâ€™d like to think the development of post-launch DLC is relatively easy going. Work on the base game is done and dusted, release dates are seemingly more flexible, and both critical and fan feedback provide developers with something to strive towards.

Significant DLC â€“ as in, new missions and extra chapters â€“ tends to be a little outlandish too, aiming to draw players back in by offering an experience unlike anything found in the main campaign. The Surgeâ€™s A Walk in the Park DLC is a good example of this. Not only does it offer something remarkably different, it also goes some way to fixing the faults found elsewhere.

We quite enjoyed Deck 13â€™s sci-fi take on Dark Souls, awarding it a 7/10 at launch, but found the abundance of dark corridors and dull industrial complexes to be far from thrilling. Ticking one fault off the list,A Walk in the Park takes place in the bright and colourful CREO World theme park. Around the park, audio logs that flesh out the character traits of protagonist Warren can be found, and so he now comes across less of an uncharismatic bore too. Thatâ€™s another fault off the list. 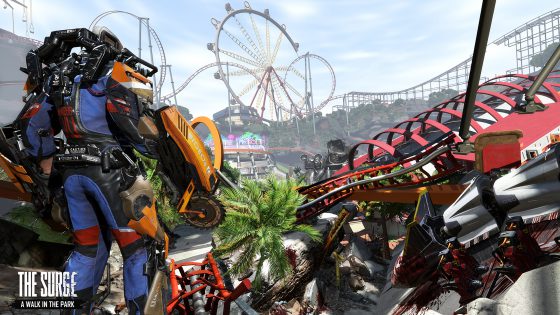 The theme park wasnâ€™t left unscathed from the main campaignâ€™s events. Far from it, in fact â€“ the robotic mascots also had their circuits sizzled, and as such are now more murderous than merry, and the park has been struck by sinkholes, causing parts of it to break away. One survivor remains, holed up in a teetering Ops Centre. He calls the shots, giving out missions as well as a few helpful pointers.

The first port of call is getting the park back online, which requires the power to be reactivated and the comms server reset. These two tasks can be completed in any order, giving chance to explore both ends of the park at free will. The parading robot mascots â€“ based on various fast foods â€“ go down easily, taking just a few hits to defeat. They have slightly different attack patterns to one another, and if you manage to perform a takedown thereâ€™s a chance to add their oversized novelty headpiece to your armour collection.

The park guards put up a tougher fight. The indoor facility containing the comms server sees several of these larger enemy types attack in waves, and itâ€™s here that the camera problems return â€“ this location is far too cramped, causing the camera to rapidly swing around and reposition itself as it tries to cope with the high volume of enemies. Thankfully, the remaining part of the DLC is set outside. Amongst the merchandise stalls, attractions, the wrecked rollercoaster track towering high above, and the bloody remains of the parkâ€™s last guests, thereâ€™s a lot to take in. 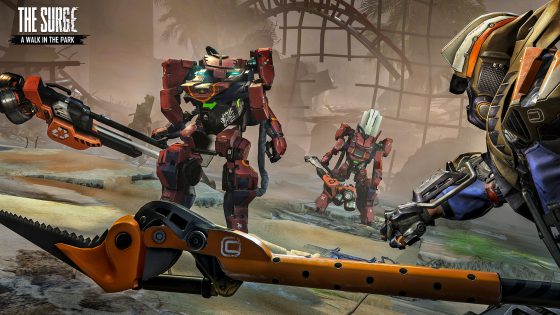 After around 2 hours of play, it becomes apparent Deck 13 decided to split this DLC into two parts. The first part ends with an unspectacular but challenging boss battle. After this, things become a little complicated. Players who havenâ€™t reached the R&D Facility â€“ one of the final locations – are prompted to continue with the main campaign and return later. Those who have already seen the storyline through to the end – and have started the NG+ mode – can continue through to the park’s lower, and more dangerous, levels.

Somewhat unexpectedly, A Walk in the Park doesnâ€™t feel geared towards battle-hardened players looking for a new challenge. The second boss is more in line with the colossal mechanical monsters found in the main campaign, but even so, high-level players shouldnâ€™t struggle here. And while thereâ€™s an assortment of new weapon and armour to find, chances are NG+ players will have something far meatier and sturdier in their arsenal already.

Thatâ€™s not to say A Walk in the Park canâ€™t be enjoyed by experienced players looking to jump back in, but thereâ€™s no shaking it that feels more geared towards newcomers. The fact that the park is accessed via station near the beginning of the game also suggests this, as does the relaxed difficulty curve. 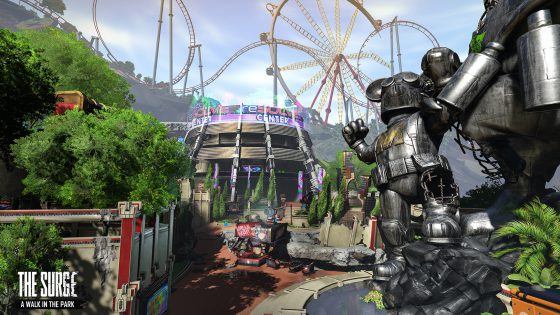 If we now view The Surge and A Walk in the Park as a whole (a ‘Complete Edition’ is now available, incidentally) the package does feel better rounded. CREO World adds some much-needed variety, and itâ€™s incredibly well-designed with numerous new paths and shortcuts gradually opening up. The enticing setting lends a few unexpected humorous moments, too.

For new players, The Surge now offers more than ever before. Existing players should be aware that A Walk in the Park lives up to its name in more ways than one.