The dealer in this card based role-player is something of an enigma. Heâ€™s neither a friend or foe, praising and rebuking your decisions in almost equal measures. He also seemingly enjoys casting doubt over your chances of success, suggesting you donâ€™t have the intellect to beat his game. Pity for him, this only makes surpassing his expectations that touch more rewarding.

As you progress through his finely crafted card game, the shadowy figure becomes increasingly irked, in some instances raising his voice to almost threatening levels. He genuinely believes he has created the ultimate game; one to test the mettle of all those who step into his dimly-lit caravan.

Thereâ€™s an underhand element of truth in all this. Since the release of the original Hand of Fate in 2015, the Brisbane-based Defiant Development has slogged away to create an all-around better game. Every single feature is improved and expanded upon, resulting in a far deeper and richer experience. Thereâ€™s more variety, too, even if this mostly stems from simple skill-based mini-games. 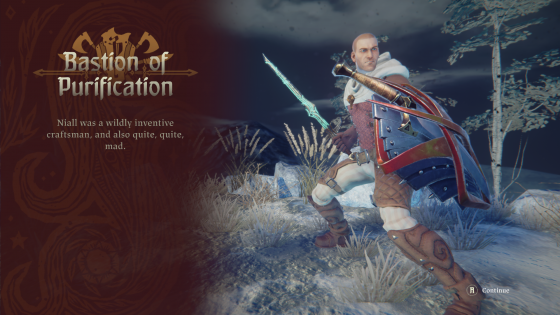 Although card based, Hand of Fate 2 is a very different beast from the likes of Magic the Gathering and Gwent. It has more in common with Ian Livingstoneâ€™s Fighting Fantasy gamebooks, in fact, as most cards trigger events with multiple choices. Together they form a variety of multifaceted quests, with requirements to meet and an occasional boss to defeat.

Combat is handled in real-time, taking cues from the Warner Brosâ€™ school of close quarters encounters. Mad Max, Shadow of War, Batman: Arkham Knight â€“ take your pick. Enemies are quick to surround and glow a certain colour when theyâ€™re about to strike, giving precious seconds to act accordingly by either blocking or evading. Beating a combat sequence completely unscathed is incredibly satisfying, especially upon entering an arena with little to no health.

Being a set-up centred around perfect timing, it takes a while to master. The trick is not to button bash, as tempting as it may be, as your customisable character is unable to block whilst mid sword swing. Thatâ€™s to say, itâ€™s impossible to block during attack animation cycles. You may be able to evade, however, rolling out of harmâ€™s way. Companions now tag along in battle, with the first being a mischievous wizard who can bestow a temporary protection spell. Later, consumable items can be carried, such as a potion that causes enemies to turn on one another.

Companions play a part outside of battle too, as each has a personal side-quest to partake. The cards giving the chance to do so can be added to decks at free will before a quest starts. The ability to customise decks adds a great deal of depth, allowing you to play it safe with already discovered cards â€“ of which the consequences of using are already known â€“ or using new cards of mysterious virtue. Some may bring you gold, food, or new weapons. Others may bestow a curse or blessing, depending on the outcome of a dice roll. Indeed, you may curse â€˜Lady Luckâ€™ every so often.

The other means of reaching an outcome veer towards skill based, including a spinning â€œprizeâ€ wheel and a swinging pendulum. These are introduced gradually, giving time to acquaint. 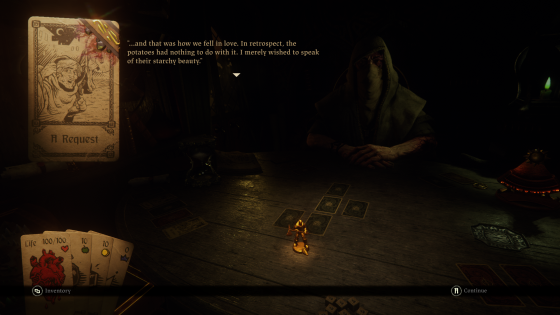 The dealerâ€™s challenges are presented not so much as missions, but as stories; stories that often have a slight twist in the tale. The quality of writing is superb, with some remarkably dry humour present. Cards and their events are described in vivid detail, making it possible to conjure images of the surrounding world. The tidily drawn artwork for each card helps here, too – itâ€™s very easy to lose yourself in the moment, despite the game itself being little more than a few cards laid out on a table.

Certain requirements are often demanded before landing on the final card. Success on evacuating a plague-ridden town depends on finding and freeing 60 citizens, for instance, or gathering six blessings before facing a mysterious maiden. Thereâ€™s a rather humorous escort quest as well, requiring you to keep a humble potato farmer alive as you battle the skeletons determined to reunite him with his dearly departed. To say this farmer is besotted with potatoes is an understatement, putting himself in grave danger just to savour their starchy goodness.

Missions generally take around 30 minutes to beat, and thanks to a smoother difficulty level it isnâ€™t uncommon to emerge victorious on the first or second try. To elaborate on the improvements to the difficulty level further, curses â€“ which severely harmed chances of survival in the first game â€“ take a backseat here, and both gold and food flow more freely. 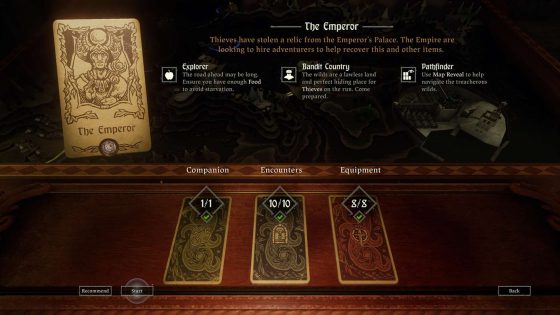 Itâ€™s also possible to set up camps, in which equipment can be bought and sold and foodstuffs – our hero survives on a diet of baked apples – can be consumed. Plan appropriately and itâ€™s possible to regain a great deal of health while pitched for the night. If the worst comes to the worst, you can always sell a few items and buy a bag of apples to munch on. In a way, this makes combat more forgiving â€“ heading into a boss battle with almost no health left was a common occurrence in the original. Now itâ€™s a situation only poor planners or the severely unfortunate will find themselves in. Slowly but surely, youâ€™re taught how to adapt to new challenges, implementing fresh strategies and revising decks along the way.

While Hand of Fate 2 provides an all-around smoother experience, itâ€™s by no means a cakewalk â€“ beating the dealer at his own game is a sizeable undertaking. Moreover, it’s very pleasurable way to escape the bitterness of winter.