Have you ever played a game so glitchy that youâ€™re left in perpetual fear of it crashing? NPCs begin behaving oddly, collision detection goes to pot, and the frame rate takes a nosedive. All the while youâ€™re hoping that the last auto-save was before your character gained the ability to walk through solid objects.

After being thrown into a colourless void outside the gameâ€™s boundaries within the first ten minutes of play, Maximum Gamesâ€™ Road Rage â€“ not to be confused with the recently released Road Redemption â€“ constantly had us on high alert. Turns out those fears were well placed. It crashed twice during the 4 hours we spent with it, and we also had to restart a race after becoming stuck to the pavement, flailing ragdoll physics and all.

Suffice to say, set expectations low. Those hoping to find similarities with EAâ€™s celebrated Road Rash series will be left particularly disappointed, as youâ€™ll find no long and winding US freeways here – races are ridiculously short, with most entailing a couple of laps around small city blocks.

Also cast aside all hopes of brutal motorbike-mounted fisticuffs. The combat system is woeful â€“ rivals go down with just one hit, shoddy collision detection permitting. 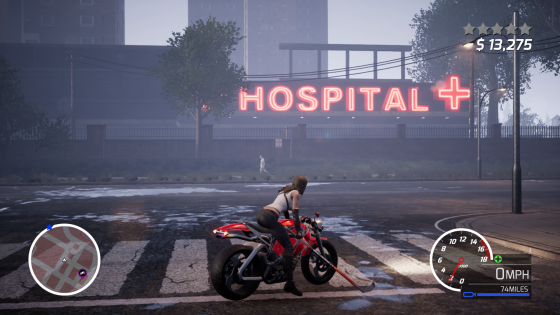 What we have here is an open-world racer, set in a fictional crime-ridden city. The cityâ€™s layout is one of the few things Road Rage gets right. The map is reasonably large and designed in a coherent fashion, split into seven districts. Theyâ€™re suitably different from one another, right to the point where itâ€™s easy to tell which district youâ€™re in just by taking in the surroundings. Thereâ€™s a fair bit of detail on the storefronts and such, too. Cruise slowly through the retail district and youâ€™ll spot a greengrocerâ€™s window advertising â€œmassive melons and XXL bananas.â€

Yes, this one of those games.

Available missions can be selected from the menu screen, removing the need to travel to the glowing mission icons spread around the city. This method also prevents heading to one of these icons to find that you havenâ€™t unlocked the bike required yet or discovering that itâ€™s a mission already completed. Not that there are means of seeing which missions youâ€™ve beaten â€“ a huge oversight, which caused us to play through some races twice.

Astonishingly, it gets worse. In addition to the usual assortment of races (elimination, checkpoint, time trial, etc) there are story missions, provided via a mobile phone that frequently pops up on screen. Put simply, there’s no obvious way to accept these missions. We drove around looking for the corresponding icon, and checked the map screen for info, all to no avail. It truly beggars belief. 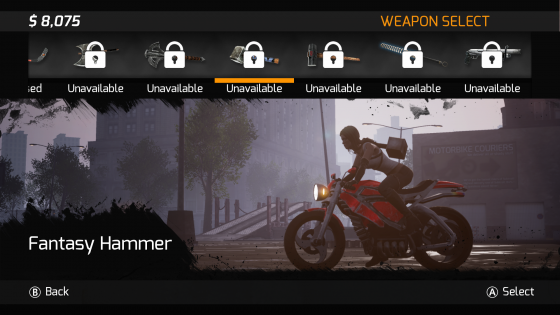 Combat falls short of being Road Rageâ€™s saving grace. There are numerous weapons to unlock and purchase â€“ varying from a selfie stick to a chainsaw â€“ but apart from having longer ranges, differences between them are insignificant. After purchasing the wide-ranging hockey stick, youâ€™re set for the rest of the game.

cast aside all hopes of brutal motorbike-mounted fisticuffs

When approaching a rival, a push of the â€˜X buttonâ€™ will prompt your rider to match their speed â€“ a rare display of ingenuity â€“ so that you can clobber them with your chosen weapon. Whoever lands a hit first remains upright; the loser is sent crashing to the ground. Or sometimes through it, due to poor collision detection.

Fights are over so quickly and are so sloppily implemented, that thereâ€™s no satisfaction to be had whatsoever. In fact, most races can be won without engaging the opposition. They take a swing or two as you pull away from the starting line, and then tend to keep their distance. On a few instances, we even observed AI racers become permanently stuck behind parked vehicles. This brought back some rather horrific memories of Carmageddon on Nintendo 64.

As for the handling, itâ€™s â€“ unsurprisingly by this point â€“ bad. Bikes have no weight or substance behind them, meaning itâ€™s possible to swing around every corner with considerable ease and grace. Performing a wheelie is equally unconvincing â€“ pull the analogue stick back and you can go for miles, without worry of toppling over. 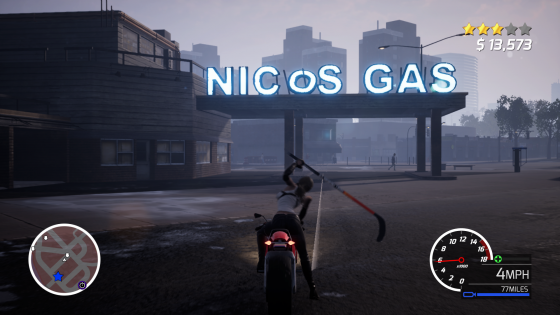 The kindest thing I can say about Road Rage is that, on the most basic and perfunctory of levels, it works. Select a race, and itâ€™s possible for you to rally around from one checkpoint to the next, win, and unlock the next mission. Your competitors may not have enough intelligence to finish the race, but thereâ€™s nothing to stop you from crossing the finishing line. Weâ€™re talking about real bog-standard stuff here.

Earlier this year Maximum Games released the broken and buggy Troll & I, which was soon followed by the ridiculously dated online shooter Dead Alliance. Road Rage makes it three stinkers in a row.

Weâ€™re all for publishers sniffing out and releasing smaller titles, but we feel the time has come for Maximum Games to evaluate their business model. How itâ€™s set up currently really isnâ€™t working, and it wonâ€™t be long until they gain a reputation impossible to shake.